EVERY EARNEST CANADIAN citizen who has dreamed of talking back to the government, leading a crusade against hard-fisted politicians and winding up triumphantly in headlines will get a vicarious bang out of the brief public career of a resolute Toronto housewife who did all three. She’s Mrs. Mary Young, a statuesque ex-model of 44, and mother of two, who describes herself as “sort of civic-minded.” All she did was persuade the city of Toronto to scrap plans for a new $200 million subway after they had almost been accepted. She did it by single-handedly opposing the whole government of Metropolitan Toronto, the city's Board of Control and the Toronto Transit Commission. And when she had whipped them she handed them her own plan for an alternate subway route, which they agreed to study.

In a nutshell, she provided her city with a small lesson in democracy.

The TTC first put up its subway plan in February 1955. The underground was to run for about three miles under midtown Bloor Street, east and west of the present Yonge Street subway.

“Ridiculous!” Mrs. Young wrote the newspapers. “That district’s been static for 30 years.” With her husband, a schoolteacher, she toured the sprawling city for weeks by car, pinpointing hous-

ing. hospitals, churches, industry, schools. Then she wrote 500 letters in longhand to city officials, merchants and newspapers, explaining that in a fan-shaped city like Toronto, bounded in the south by Lake Ontario, lines of communication spread out from the centre like the spokes of a wheel. She’d build a diagonal subway to the northeast and northwest outskirts, she told everyone who would listen.

She pestered Toronto Board of Control so insistently that controllers gave her ten minutes to explain her case. She took 30 and left them flabbergasted. One. William Allen, wrote to her; “I now feel your plan would serve a larger number of people.” The T. Eaton Company asked for details of her study for its property department.

The payoff came one day this summer when Metro chairman Fred Gardiner said a Bloor Street subway would be a mistake; Metro would study others, among them Mary Young's. By that time she was already busy with other matters, including her inventions. Ever hear of the Mary Young butter conditioner or bedclothes rack? You probably 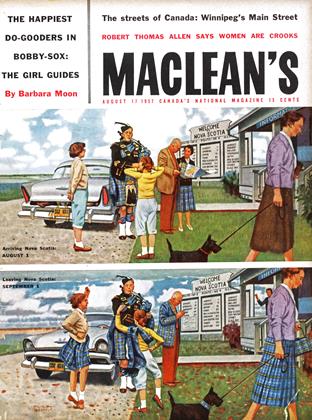