Well, no sooner did we buy John Clare’s amusing satire, The Night Grandma Swam the Lake, than darned if it didn’t happen in real life. Except Clare's grandma made it (as you’ll discover by turning to page 16) while the real grandma, Mrs. Rosita Tanner, aged 44, of Sault Ste. Marie, Ont., was taken out of the water after having swum a distance of twenty miles in about eighteen hours.

This, it develops, was Mrs. Tanner’s third try. She tried twice last year, without success, but this time succeeded in doubling her distance, perhaps as a result of three months of solid training in Lake Superior.

At the end of her attempt, Mrs. Tanner was gasping for breath but she gamely fought off her handlers, in the best tradition of lake swims, and vainly attempted to keep going. Hers was the first attempt of the season to swim Lake Ontario— but not by any means the last.

Our Mr. Clare’s version, which we recommend to you, could happen, we keep telling ourselves, but we hope it doesn't.

Union among the Protestant churches has been the subject of continual discussion for more than half a century. Next month more than forty sects are meeting in Oberlin, Ohio, to discuss this very subject—the first such gathering in North America. It’s with this in mind that we’re scheduling in our next issue the results of a taperecorded panel we recently held on the same subject. Five of Canada’s largest Protestant denominations are represented.

Jeann Beattie who tells about her burglar on page 14 is a successful novelist. Her first book "Blaze of Noon” won the Ryerson Fiction Award for 1950.

Barbara Moon, who has been chronicling the lives of various TV and theatrical personalities for us, has just returned from Hollywood where she was mistaken for a movie star. You’ll be reading the results of her researches there in a future issue and we will report further, no doubt, on Miss Moon’s activities in the glamour capital.

Two pieces coming up this fall we think you'll want to read: Sidney Katz has spent several months researching the story of the late Herbert Norman to find out what kind of man he was. And Peter Newman is just completing a fascinating study of Canada’s economic aristocracy. Some surprises in both. 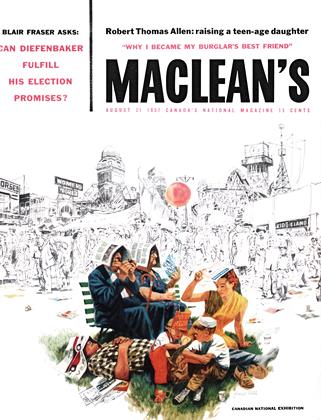