What Protestants are already doing about union September 14 1957

It’s not generally realized that hundreds of church-union plans are being discussed by Protestant denominations around the world, and that scores of unions have already taken place among various Protestant sects. In Britain, for instance, proposals have been advanced to introduce bishops into the Presbyterian church and elders into the Church of England, as the first step toward organic union. In Australia and New Zealand. Presbyterians, Congregationalists and Methodists are discussing the same kind of union that produced the United Church of Canada. In Jamaica, India, Pakistan and Ceylon various ambitious forms of Protestant unions are being talked about.

In Canada, union discussions centre around the United Church and the Church of England, whose theology students now study together at McGill University. Last June the United Church at its Toronto conference voted to continue to work toward union with the Anglicans. Recently, in two Ontario counties, fourteen Protestant churches joined together in a drive for more money and for new members.

In the past twenty years there have been large mergers of Protestant groups in France, Switzerland, the Netherlands, Brazil, Madagascar, Japan, Rhodesia, India, the United States, the Philippines and Germany. Some of the most significant:

Japan, 1941: Presbyterians, Methodists, Congregationalists and other smaller denominations formed The Church of Christ in Japan.

Rhodesia, 1945: Congregationalists, Presbyterians and the Union Church of the Copper Belt formed the Church of Central Africa in Rhodesia.

In North America the most interesting experiment in church union is the United Protestant Church of Silver Bay, Minnesota, which draws its congregation from fifteen religious groups: Presbyterian, Methodist, Baptist, Congregational ist, Episcopal, Evangelical and . Reformed, Evangelical United Brethren, Churches of Christ, three Lutheran sects. Church of the Brethren, Assembly of God, Church of the Nazarene and Christian Science. ^ 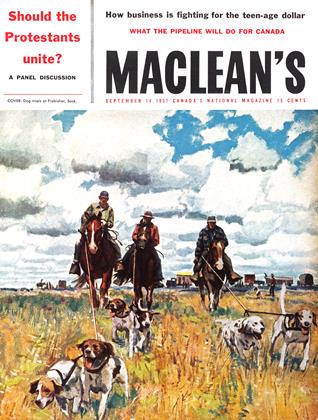