The year is 2189. A scientist sits in a lab, surrounded by strange tubes, flasks and huge electrical devices. He is studying a blackboard on which is written a mass of algebraic symbols. He is trying to work out a formula for liquid fuels that will propel a rocket to the moon. But he isn’t getting anywhere. In fact, he doesn’t get anywhere. He finds that sending a rocket to the moon is impossible. For one thing, they can’t get anything to go fast enough, and they have been trying since 1957.

He turns to a keen young assistant and says, “Look, son, why don’t you go in for real estate or something? Science has had it. For two hundred and thirty-two years now we’ve had a rocket that will go a hundred miles into outer space and no farther, a two-hundred-inch lens that we can’t make any bigger. We have the meson and six new elements that we created in 1957 and don’t know what to do with. We haven’t been able to discover anything else or make anything go farther or faster. We used to always say that science had developed the radio and split the atom and that it would be just a matter of time before we reached the moon. I don’t know what made us think this.”

He gets up, stretches, yawns and says, “Well, I think I’ll get into my Nash Rambler and start battling that traffic. Think I’ll watch the 2,031st Pabst Blue Ribbon fight tonight on TV. Although I don’t know why. Those fights are getting as bad as wrestling. I think they write scripts for them.” 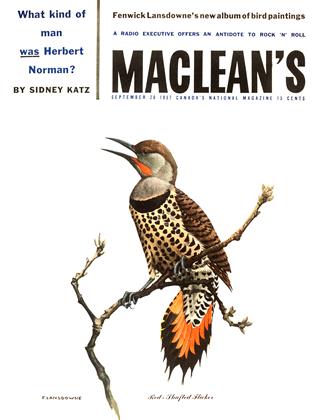