It was no surprise to find, on opening our Dec. 21 Maclean’s, a picture of Mrs. Diefenbaker. What feminine face confronts us more often than the wife of the prime minister? We are really getting a little tired of gazing at her. Does Mr. Diefenbaker consider his job to be primarily social? No other man in high office that I can think of has ever tagged a woman along so constantly.—CONSTANCE JOHNSTON, TORONTO.

It is an interesting portrait of a charming and popular woman. However, I deplore the two references to Churchill, with their implication that he was delighted at the results of the Canadian federal election. 1 doubt the actual truth of these remarks for certainly in his long career Churchill has rarely been so injudicious. To say the least, such references are in bad taste and will do nothing to promote Anglo-Canadian friendship.—o. JOHNSON, PRINCE ALBERT, SASK.

1 venture to suggest that in your headline, Brock Chisholm explores the pitfalls of the Ten Commandments (Dec. 21), a Maclean’s editor committed a gaffe almost as outstanding as your comment on the return to office of the Liberal Party which wasn't returned to office. One thing Brock Chisholm definitely failed to do in his piece was explore the Ten Commandments, let alone their pitfalls. The only Commandment upon which Dr. Chisholm risked comment— despite the headline — was the fifth. In that connection he will, 1 think, admit that parents who have themselves

been brought up in the spirit and the letter of the Ten Commandments and who have continued to live thereby, will be most worthy of regard and honor from their children. Thus the fifth Commandment receives automatic vindication.—R. W. HAM B LETT, BRENTWOOD BAY, B.C.

s That courageous prophet of a new era, Brock Chisholm, has shown great clarity of thought in pointing out the foolishness of adhering to those obsolete vestiges of the superstitious past, the Ten Commandments.

What a splendid place Canada will be to live in when we can educate all Canadians to disregard every one of the Ten Commandments, instead of just a few, as we do now.

I am sure that anyone clever enough to know more than God Almighty Llimself, would have no difficulty in finding

the solutions to the problems this would RAISE.-GERALD WRIGHT, STEINBACH,

When Blue Bombers beat the Eskimos, Annis Stukus ate one of Jim Coleman’s cigars. I think in view of what happened in the Grey Cup, the least John Kerns could do would be to cat the

issue of Maclean’s (Dec. 7) in which he explained why the east couldn't possibly win for YEARS.-NORMAN V. RAGG, DUNDAS, ONT.

s I would like to apologize for the west in not living up to your football prediction. Here in the west football is considered with honor and dignity. Our fans do not tackle football players or trip them simply because officials will not allow anyone past the track. Our coaches do not get into fistfights or slander another club, because they would be fired if they did. The Eskimos along with other western clubs are proving that the wounded don’t cry out

On your article, Why Red Ryan's Shadow still Hangs over every Prison Yard (Dec. 7): We do not seem to mind spending millions of dollars to keep prisoners in jail, to embitter them, to destroy their souls, but how' we howl if the money is needed to help make them better citizens. That is considered sheer extravagance. Let us stop “destroying young OFFENDERS.-MRS. M. SILLS, PORT ARTHUR, ONT.

T he Queen: indifferent and aloof?

lime Callwood’s article on the Queen (Dec. 7) stated “The Queen’s inexperience, etc.” . . . what BOSH! The Queen is not inexperienced at meeting the public. She was trained to do that job. Why don’t we stop making excuses for her aloof indifference toward the public? If she’d forget herself and think about the people who are so eager to meet her, she’d be more gracious. Surely a few off - the - cuff kindly remarks wouldn’t strain her intellect too much, or would it?—FRANCES L. STACEY, SASKATOON.

iS Who found Eldorado? iS Poor lucky dancers

Under the heading The Real Uranium Poneer (Nov. 9) you publish a letter signed by Ernest Hardisty in which it is asserted that Dr. J. Mackintosh Bell, not Gilbert LaBine (as stated by you in your Sept. 28 issue) should be considered as the real discoverer of the mine at Great Bear Lake from which the material for the A-bomb was obtained.

The facts are: In 1900 J. Mackintosh Bell and Charles A. Camsell, on a reconnaissance expedition for the Geological Survey of Canada, noticed mineral stains on rocks along the shore of Great Bear Lake. Bell mentioned them casually in his report. Neither Bell nor Camsell ever returned to investigate. In 1929, however, Gilbert LaBine flew to Great Bear Lake where, in two weeks’ prospecting, he found such evidences of important mineralization that he returned the following spring for a longer stay and discovered what became the Eldorado Mine. Dr. Camsell is in error when he states in his book, Son of the North, that LaBine went to Great Bear Lake after reading, in 1930, Bell's account of the 1900 expedition. LaBine had visited the area before he ever heard of Bell's report: and what his experienced prospector's eye told him caused him to return.—D. M. LeBOURDAIS, TORONTO.

Editor’s Note: Both correspondents tell part of the story accurately. LaBine. flying south from Great Bear Lake in 1929, noticed mineralized stains from the air. That winter he found Bell's report in the Ottawa archives; the sighting confirmed, he returned in the summer of 1930 to searc h for, and find, the lode.

About Life Sentence with the Ballet (December 7): Poor things! that they should have to turn down a mere $1,000 a week and then collect unemployment insurance! 1 can't sleep nights wondering how we can afford tomorrow! - JOSEPHINE PALMER, COBOURG, ONT.

Certain of my friends have brought to my attention a reference to me in the article, What Kind of Man Was Herbert Norman?, by Sidney Katz, in Maclean's, Sept. 28, 1957.

This reference to “the Canadian representative at the League of Nations who during the Ethiopian War proposed oil sanctions (November 1935) against Italy” is inaccurate and misleading in stating: “The Canadian Government . . . hastily shipped him off to Wellington as High Commissioner.” The facts are: he continued at the League of Nations for almost two years after the oil-sanctions incident, when he was appointed to the Canadian Legation at Washington, where he served as counselor for more than two years—to January 1940—before being appointed at his own request and solely on his own initiative to the new high commissionership in New Zealand. -WALTER A. RIDDELL, TORONTO.

Editor’s Note: Maclean’s apologizes for mistakenly saying that Dr. Riddell's posting to New Zealand was made hastily. No unfavorable reflection on him was intended. 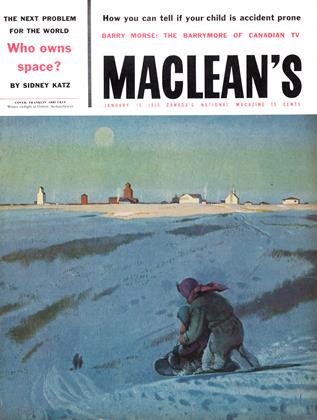