Are rich people really necessary? If the answer is "Yes,” then should they be allowed to bequeath their wealth, or large portion of it, to their heirs and successors?

This is not a quiz game (although it would provide a lively theme for discussion) but a serious question that has been made topical by the recent death of that remarkable seventy-five-year-old, the Viscountess Rhondda. It is essential to our story to take note that her father, David Alfred Thomas, was a Welshman who was educated at Oxford but did not allow the romanticism of the senior university to blind him to stern realism. He became a big colliery owner and a member of parliament. Despite a long personal feud with his fellow Welshman, David Lloyd George, the latter appointed Thomas minister of health. Then in World War I he took over the ministry of food and made a great success of it. Just before the war ended Lloyd George created him a viscount but it was a glory that lasted only a few weeks. The ultimate democracy of death took him away from life’s struggle and life’s glory.

Alas! He had no son. The brief candle of his peerage had gone out. There was a daughter but unhappily the British laws of succession ordain that hereditary titles, except with royalty, are only maintained through the male line.

Lloyd George, however, was determined to pay the debt owed his fellow countryman, so by special decree it was ordained that the viscount’s daughter should be created a viscountess in her own right.

Here indeed was a difficult and delicate situation. In 1908 she married a mere baronet named Sir Humphrey Mackworth but the marriage was not a success and was eventually dissolved.

Up to that time the bestowing of a peerage on a woman was a very rare thing, but it brought happiness and a sense of purpose to Lady Rhondda. Her father had been a mighty servant of the state. Now she, his daughter, would create a weekly magazine in which she could play a part in molding public opinion.

Unhappily a sense of purpose or even a sense of dedication is not enough to ensure success with the reading public. Yet she and her staff

worked hard and produced an intelligent periodical, even though there was no touch of genius about it.

The magazine was Time and Tide, and for a while it did well. Like all publications it had eventually to face the challenge of the new monster of television, but it remained alive.

There was a genuine grief among her editorial associates when Lady Rhondda’s death was announced. She was a brave and enthusiastic woman, dedicated to her magazine and its staff, and a champion of good causes. Yet her associates on Time and Tide would have been less than human if their grief had not been partially assuaged by the publication of her kindly will.

She left an alleged £85,458 altogether, and in her will decreed that twenty thousand pounds should go to a friend in Wales, another twenty thousand pounds in trust to her nephew, a fewthousandpound bequests here and there, and finally a charming instruction that a Mrs. Thursby, who owned a tobacconist shop, should have a life gratuity of twenty-six pounds a year “for keeping me supplied with matches for some fifteen years. '

For economy of space I have left out some other awards from her estate but you will agree that her goodness and generosity, like her stubborn idealism, remained in the armor of her spirit to the very end.

Lady Rhondda had remembered nearly everyone who was close to her but, being a romantic, she had made one unfortunate miscalculation. Not for the first time a woman had mistaken gross for net. When the minions of the chancellor of the exchequer had finished with her estate it had shrunk from £85,458 gross to £27,995 net. She had also forgotten some benefactions which had decreased the gross.

All of which brings our story to a very important point. We hear constantly about the high cost of living but it is time that here in Britain (and perhaps in Canada) we should seriously consider the high cost of dying.

Most men have two basic financial ambitions—first, to receive adequate financial reward for their work, and secondly, to be able to leave widow and family financially secure. But here in Britain we tax both the living and the dead at such a level that it is terribly difficult for a dead man’s dependents to maintain anything like the level of life which he and his family had enjoyed.

But it is not merely the professional man who suffers from the burden of taxation. The managing director of a mighty industrial firm employing thousands of workers may draw a salary of fifteen thousand pounds a year. The strain on him is great but so are the claims. The earnings of his company grow but if his salary grows with them the treasury holds him up like a highwayman and demands a bigger share of the swag.

Inevitably the industrialist and the

self-employed man turn to the medium where they might win. If. for example, 1 buy shares in a South African gold mine and the shares go up 1 can take my profit, if there is one, and pay no income tax upon it.

But if a man gives his very life blood in creating something that did not previously exist the skinny fingers of the treasury close on the money like a grasping miser.

Fortunately in Britain there is a prime

minister who is not merely a politician but a publisher of wide experience. We have heard probably too much about Macmillan's grandfather who lived in Scotland as a poor crofter but bred a family which in the third generation pro-

duced a mighty publishing house and eventually a great prime minister. But is the same road of opportunity open today? No one will say that opportunity has ceased to exist but the road narrows and the rewards lessen.

So we return to the strange and rather wistful story of Viscountess Rhondda. As a woman of honor she directed in her will that her trustees should discharge out of her general estate any sums owed by her or any guarantees she had given to the printers in connection with the publishing of Time and Tide.

I have already mentioned her twenty thousand pounds in trust for her nephew, and a similar amount for a friend, and a number of thousand-pound benefactions to tried friends and colleagues. In fact a bountiful woman had departed life in an aura of bountiful generosity, but, by the time the exchequer was through with her estate, her benefactions could only be partially realized.

Now let us leave her in the peace of eternity and end this London Letter with a short dissertation on the origin of death duties and their effect upon the social scene of the United Kingdom.

The taxing of the dead is not a modern or even a Victorian invention. Actually it dates back to the Romans. Before the 17th century was out many European countries had imposed inheritance taxes. The British held back until a century ago and then introduced a progressive system of death duties. Canada, I am glad to say, held out against a federal tax as long as possible, but early in the Hitler war the Canadian government imposed a combined estate and inheritance duty— an example duly followed by other dominions.

But has the process gone too far in the United Kingdom? One might argue that the preservation of the stately homes of England is not a matter of great importance, yet it is these splendid relics of a former glory which gives charm and character to the English countryside. Eaced with heavy death duties the aristocrats have compromised with fate. Thus the Duke of Marlborough, descended from the mighty conqueror and incidentally a relative of Sir Winston Churchill, decided to throw open the famous house, Blenheim, and its grounds at so much per head.

The Duke of Bedford went ever further. He allowed the nudists to hold theii annual convocation on his ancestral estate, Woburn Abbey, at so much per

body. Then there is the Marquess of Bath, who opened his splendid home, Longleat, and takes toll in the process.

In fact while the workers rest at the end of the week the peers toil.

Both the satirist and the realist might well agree that this advent of commercialism will eventually bring the aristocratic tradition to an end and make way for the common sense of democracy and equality. But the English refuse to believe that common sense is the finest flowering of the human spirit, just as they refuse to believe that there can be absolute equality in men or horses.

Well—there we arc. The House of Lords survives at Westminster just as the houses of the lords persist on the countryside.

But I am sorry that the greedy fingers of the treasury took so heavy a toll of Lady Rhondda's estate that her kindly bequests were cruelly reduced. She was a dedicated woman who gave more to life than she took from it.

When I began this London Letter it seemed inevitable that with the passing of its Lady Bountiful the struggling Time and Tide would cease publication. But the editor has succeeded in getting sufficient financial backing to keep going. Thus there is a time and there is a tide in the affairs of men and it is good news that this brave periodical is to continue its reforming task. ★ 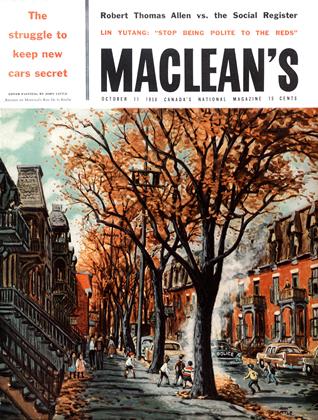