Singer, song and revue to watch: Pulsequickening Joan Stuart of Toronto, giving out with Looking for a Man from the new Brian (My Fur Lady) Macdonald-Roy Wolvin production, Up Tempo ’59. With a rhinestone sparkling in her midriff, Miss Stuart, who played a warm-blooded secretary in My Fur Lady, gives a low sizzling curve to the lyrics that stop the show in Up Tempo, now playing to packed houses at the Café André in Montreal. After Christmas, Macdonald and Wolvin expect to take their revue to Toronto, Winnipeg, Vancouver and way points, à la My Fur Lady.

strides in the footsteps of top Quebec writer Marcel Dube. André Pierre Boucher, 22-year-old poet and occasional CBC-Montreal employee, is taking his first play. Les Embardées (The Digressers), to New York for a tryout w ith the Theatre Guild. A watered-down version of Les Embardées was panned in Montreal regional drama festival, but the outspoken original script has excited the Theatre Guild’s interest. Encouraged, Boucher quit CBC and has started his second play, a comedy.

Producer to watch: Irish-born Michael Sadlier, 34-year-old veteran of ('anadian (Peterborough, Ont.) summer theatre and British and U. S. TV, has now set up his own television-production company, Northstar Pictures, in Toronto. Northstar will start work in January filming two complete 39-part series (Hudson’s Bay, with Barry Nelson, and Troubleshooters, starring Keenan Wynn). Sadlier expects to provide work for hundreds of actors; he's farming out scripts to Canadian playwrights. His thesis: “Toronto’s ready to be a major production centre, not just an out-oftown location for U. S. companies." 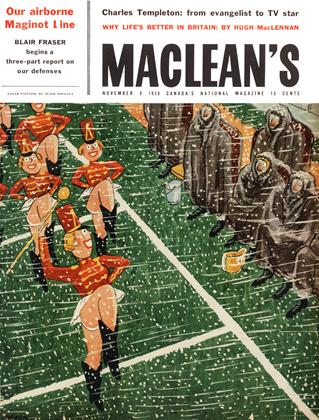