Your article on Alan Jarvis (Is Jarvis Mis-spending Our Art Millions? Nov. 22), overlooked the deeper significance of Mr. Jarvis’ accomplishments. Mr. Jarvis has done a magnificent job, despite uninformed opposition. He has introduced world art to Canada and has dared to defy narrow provincialism. He has valiantly represented a progressive viewpoint . . . has, in three years,

made the name of the National Gallery outstanding in all the important capitals of the art world. While it is easy to differ with Mr. Jarvis’ choice of purchases, it is not quite so easy to pass final judgment. Only time will tell how well he has selected from contemporary art. Until then, he should be allowed to continue to exercise his intelligent JUDGMENT.-JOSEPH H. HIRSH-

. . . Instead of calling these blobs abstract art, I suggest we rechristen them Jarvisism ... If wealthy people like to support this racket, just to show that they can afford to be fools, why should taxpayers’ money be wasted on it? - R. W. SANDERS, ST. CATHARINES.

is* Alan Jarvis is one of the nice things that has happened to Canadian culture. Support him—encourage HIM!-PETER

N. J. Berrill (Have Insects Got Us Licked? Nov. 8) has put forth the most convincing arguments for Hollywood's rash of horror pictures. With Berrill at the script and Elia Kazan at the

camera they could produce such epics as I Was A Teen-age Cabbage Aphid or A Captain’s Parasite.

If the men at the laboratories keep developing insects to eat insects and parasites to clamp onto parasites, we may wake up some day to find that the hand that rocks the cradle resembles the antenna of a praying mantis.—

Mark of a “typical American”

Ken Johnstone’s reference to “a typically drunken American tourist” (Holiday Weekend in Quebec City. Nov. 8) is not only rank discourtesy but a wholly unwarranted reflection on the hundreds of thousands of our citizens who visit Canada. Is it possible your writer has been so busy covering the night spots that he has never seen a typical American tourist? His opinion is, I am sure, a minority one. I have an extensive acquaintance with eight of your provinces. Without exception, these good people are striving to strengthen, not to destroy, our international relations.—R. G. CULBERTSON, SEATTLE.

What makes a city pretty

“One of the ugliest cities in the world,” said National Gallery director Alan Jarvis of Saint John, N.B. (Preview Nov. 22). His statement is in the tradition of the contemporary art he buys: stark, sterile, sometimes silly. Contrast it with the magnificent word picture drawn by the late great master of invective, H. L. Mencken, of Baltimore. To a press conference in Halifax,

N.S.: “Ah, this old. historic city, where the very gas stations stand out like spots of BEAUTY.”-PAUL MORTON, TORONTO.

Re your Nov. 8 cover, at the football game: the majorettes can go bare-legged and half-dressed because, being women, they have the well-known layer of fat under the skin which keeps them warm while anyone playing that game or paying to watch it—the fat is all in their heads. That is "how come.”— W, S. WOOSTER, NEW WESTMINSTER, B.C.

At first glance my impression was a nudist group climbing a mountain. On closer inspection I find they are wearing pink tights. - A. E. COLGAN, VANCOUVER.

My sincere thanks for Hugh Macl.ennan’s fine article, Why Life is Better in Britain (Nov. 8). The contrast he drew between life there and in Canada should make us stop and wonder just what we are striving for here—certainly not peace of mind or contentment. As for our glamorously morbid newspaper headlines, the recent hideous mine disaster at Springhill, with radio, TV and newspapers blatantly capitalizing on the grief and misery of women waiting at the pithead, was a sordid example of how we have become imbued with sensationalism and enjoyment of gruesome details. Let us consider how undignified we arc BECOMING.-MRS. EVA M. NEWCOMB, LANCASTER, N.B.

v* This summer we had a sister from London visiting us. The first time she came was in 1937 when she remarked that what most struck her was the genuine happy laughter she heard. This year her remark was that she missed the happiness and laughter. Everybody seemed to be too engrossed in acquiring a bigger car than his neighbor, more land and more up-to-date implements, to have time for social enjoyment and those little helpful neighborly acts . . . Is it true that the maximum of happiness is in proportion to the minimum of material wealth? - CHARLES EVANS SARGENT, EYRE, SASK. EYRE, 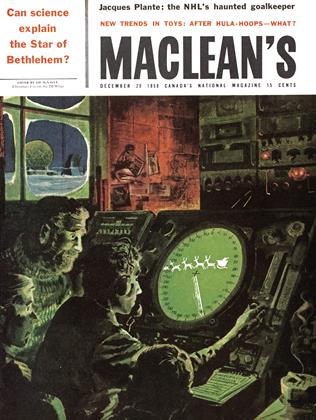