IN SETTLING the question of leadership, the Liberals at their convention also went a long way toward settling an important question of strategy: should they or should they not challenge the Conservative government at once, and defeat it in the House if they can?

There is a difference of opinion on this point between Lester B. Pearson and Paul Martin. Pearson up to now has been rather quiet and unprovocative in parliament, because he thinks it’s absurd to do a lot of barking and no biting. Now, however, he believes the time has come for the Liberals to behave like a normal opposition—express their lack of confidence in the government by vote as well as by voice, and take the consequences. Martin, whose speeches at the current session have been much the more vigorous and aggressive, is the one who favors a continuance of evasive action, to keep the Conservatives in power as long as possible.

The case for delay is obvious enough. The unexpected catastrophe last June left the Liberals disorganized, disheartened and confused. The new leader needs time to restore order, make himself known to his own workers, put the party machine back on the rails. He has also the daunting task of reviving public enthusiasm in his party’s cause.

“Nobody seems to be sorry we were licked.’’ said one Grit veteran. “When Sir Wilfrid Laurier was defeated in 1911, 1 saw men weeping in the streets. Even in 1930 when Mackenzie King lost to R. B. Bennett, our people at least were good and mad. But this time, 1 don't find anybody who is real-

ly sore because the Tories won.”

But though everyone can see the clear and present danger in an early election, the perils of punch-pulling are equally apparent.

What the Liberals need more than anything else, what they have counted on their convention to bring them, is a revival of fighting spirit. It is difficult to revive fighting spirit while at the same time refusing to fight. The current session has demonstrated that the chief opposition party cannot go on refusing battle without a disastrous loss of face and of morale.

Some Liberals dream of stepping between the horns of this dilemma — making a quiet deal with the CCF to take turns attacking the government without ever actually defeating it. So far, the CCF has been deaf to all such hints. Even last June, despite their physical and financial disarray, the CCFers decided that the only thing to do was fight the Tories hard and take what comes of it. They are very pleased with the results of this decision, and have no present intention of changing it. They don’t exactly want an early election, but they don’t particularly fear one either, and they will almost certainly back any Liberal challenge to the Diefenbaker government.

Social Credit takes a different view. The Social Crediters definitely do not want an election this year, and will avoid one if they can. They have supported the government on most issues until now', and have taken care to be strictly alone when they oppose it. They'd like to keep on doing this.

Theoretically, this means the government has an even chance of surviving

even in the present House. Conservatives plus Social Credit are roughly equal to Liberals plus CCF, give or take a few absentees and independents.

But Social Crediters know full well that in practice their chances of keeping the Conservatives in office are small. Too many queer situations arise, like the time the Conservatives voted to over-rule their own chairman; the opposition barely managed to avoid defeating the government that day, but only by sending a dozen Liberals behind the curtain. They couldn't do the same thing again without looking like poltroons.

Moreover, the Social Crediters believe (as do most people here) that the Conservatives still want to be defeated. A defeat in the House would give their 1958 campaign a running start, proof positive that they were meeting “obstruction” in their attempts to fulfill their 1957 promises.

Social Crediters realize that if the Conservatives do want a defeat in the House, it shouldn’t be too difficult to contrive one. Therefore, since they are pretty well resigned to the thought of having a 1958 election forced on them, the Social Crediters don't intend to make any sacrifices, nor will they accept any humiliations, in order to avoid one.

In all three opposition parties, there’s a lot of earnest debate on what the major issue of the campaign will be.

Unemployment, of course, is bound to have a bearing on it. No party in opposition will be able to resist such slogans as “Tory Times Are Hard Times,” a phrase that Jimmy Sinclair

rolls on his tongue like a piece of sugar candy.

However, a rather sharp argument is developing inside the Liberal Party on the extent to which unemployment should be blamed on the Conservative government. Lester Pearson got some angry criticism from Quebec party workers for saying, at a press conference and in a television interview, that he didn’t think the present unemployment was the government’s fault.

“You mustn’t say that,” they told him. “We’re pinning it right on the Tories, all of it.”

Other Liberals agree with Pearson, though, that to make unemployment a major issue now would be “premature and tawdry,” as one of them put it. They all know perfectly well that no act of the present government has caused the present recession—that it would have come anyway.

Likeliest compromise will be a general attack on Conservative trade, tariff, monetary and investment policies, and on Conservative attitudes toward American investment in Canada, with the theme that all these have tended to make the unemployment situation worse instead of better. All parties, including the Conservative, know that no matter what anybody says, the government in power is always a target of resentment for whatever may be wrong with the economy.

“We had a convention out in Saskatchewan the other day,” said a western MP, “in a town where we used to have a job to get eight people out. At this one we had six hundred. Same in Alberta. Same in British Columbia. Our boys are really hot.”

The same man recognized, of course, that the 1957 election had already come close to Conservative high-water mark in the English-speaking provinces—he thought they might pick up half a dozen seats west of the Great Lakes and a couple in Newfoundland, maybe a few more in Ontario. But he agreed that the real testing ground, where a Conservative majority will be won or lost, is Quebec.

In Quebec the situation is still as obscure as ever. No deal between the Diefenbaker and Duplessis governments can be discerned, however wistfully the Liberals try to see one. Conservatives say they are having no trouble getting good candidates now, but they have said this before—how good their candidates really are, the election will show. Even without St. Laurent, the Liberals have a number of big names on their Quebec team and the Conservatives have yet to produce one that anybody ever heard of.

But on the other hand, organization is more important in Quebec than it is in other provinces. Organization— and money.

“The trouble is, we've let our people get into the habit of thinking money is the most important thing in winning elections," a Quebec senator said. “I don't think it is, but we've allowed them to think it is. Also, we’ve allowed them to develop champagne tastes— and now we’ve put them on a beer diet.” ★ 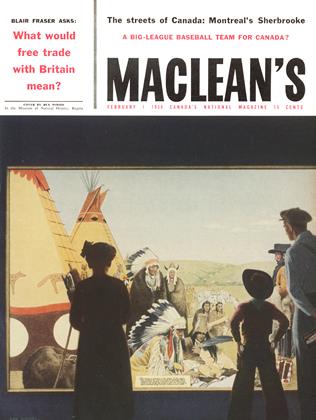