THE FOUR-DAY WORK WEEK is labor’s next big target, and it may come soon. Already one in 10 unionized office workers has a 35-hour (or less) week. Machinists and Steel Workers have both approved union convention resolutions demanding 30-hour weeks. Auto workers will probably be next: “We think the four-day week is coming very quickly,” says Canadian UAW director George Burt. If and when it does come, expect a federal-government ministry of leisure to be set up on lines already developed in several European countries and B. C., where a Nanaimo undertaker, Earle Westwood, became the province's first minister of recreation last spring.

WOMEN WHO LISTEN TO T HE DICT ATES of their milliners will have no more than two hat styles to choose between for a while. The ones who want to top off the flapper look they get in a sack dress will be olfered several variations on an ear-enveloping theme called the “cloche.’’ Second choice: the “Breton,” which will, the designers assert, “impart the fresh frivolous look of a French sailor on leave.”

been put off by Montreal planners until 1960 at the earliest. In January metro licensing of taxis had been definitely tabled for ’58, to be followed by adjustments in municipal financing and a bid in 1959 for the new provincial legislation needed to clear the way for full metro government. Now Mayor Fournier, alarmed by administrative troubles in Toronto, has issued orders to hold everything until Montreal experts can work out methods to sidestep the “shortcomings” in Toronto's system.

FIRST' REGULAR BROADCAST’S OF COLOR TV in Canada are being held up only by a technicality. CFPL. a private station in London, Ont., is ready and anxious to start color broadcasts. According to station manager Murray Brown the CBC doesn't object but because the government hasn’t yet considered the Fowler Report (which recommended local colorcasts by private stations) the Transport Department has no legal power to grant color-TV licenses. Until it does, CFPL will have to wait.

MACLEAN’S READERS WHO RECALL The Last of the Curlews, ex-staffer Fred Bodsworth’s novel that appeared first in these pages and went on to critical success and book-club selection between hard covers, may want to make a note of a new Bodsworth book due soon. The Barnacle of Bara, judged “magnificent” by its publishers, is in the Bodsworth vein: the story of a rare Barnacle goose and his search for a mate.

MOVIEMAKERS to watch: Norman Klenman and Bill Davidson, a fired-up young producing team that began shooting f e a t u r e movies in Toronto this month with a screen-play adapted from four Morley Callaghan short stories. Their heady ambition: to follow up with a long line of dramatic features based on the work of Canada’s foremost novelists.

The Callaghan film, tentatively titled Now That April’s Here, will he offered to moviegoers this spring if a tight production schedule mounted on a $75,000 budget is met.

Callaghan himself believes “these boys may be opening up an astonishing field. If this thing comes off on their budget they've got a kind of gold mine.” For their part, Davidson and Klenman are eager to acquire Callaghan’s novel. The Loved and The Lost.

ler (Maclean’s, Feb. 13) about rights to his Son of a Smaller Hero, and to Ernest Buckler about The Mountain and the Valley. Dramatists like Lister Sinclair and Arthur Hailey don't fit their plans: “We're both writers. When the time comes to shoot original scripts we have a trunkful of our own.”

There’s one unusual success they've scored even before their first film is on the screen. Usually it’s almost impossible for newcomers to finance a film through production. So Klenman and Davidson started making TV shorts and commercial films when they left the Film Board to freelance 18 months ago.

At the same time they began selling investors on dramatic features. Now Klenman-Davidson Productions l td. is backed by a 10-man group of hard-headed Ontario businessmen who’ve put up enough money to produce Now That April’s Here and at least one more fulllength movie by the end of 1958.

THE AMOUNT of "social security” Canadians now at work can look forward to could hang on the findings of Dr. Robert Clark, a little-known U.B.C. economics professor. Clark is surveying the world’s pension plans for the government: he’s also a man on a hotseat. His predecessor lasted less than two weeks before he was ousted by political crossfire.

Good advice and leading questions rattled down on Gordon Huson, a former U. K. business journalist and now University of Western Ontario business administration professor, even before he’d been briefed in Ottawa. Most onlookers assumed he’d concentrate almost exclusively on the social security system in the U. S. Not necessarily, Huson said. He’d tour Europe as well —taking a particularly hard look at Sweden’s pension plan — and might make a side-trip to Australia.

His most pressing problem was also an explosive political conundrum: in, say, Newfoundland, Huson told a press conference, Health Minister McGrath already objects that a husband and wife who are paid $110 a month are often drawing more money than they’ve ever

earned in their lives. But in booming price-inflated B. C. pensioners are hard pressed to pay room - rent and buy bread.

Any formula for varying benefits in these areas will have to be almost miraculously convincing not to be howled down by cries of regional discrimination. Huson himself was howled out of his job within days of making these statements. Clark took over with a clean political slate but the same problem: how to improve on the U. S. scheme’s rigid scale of benefits?

The average U. S. payment to a single pensioner is $76. But Connecticut leads all states with a $92 minimum for everybody over 65. And those who decry high social security payments can find sitting-duck targets in any state.

Take a Kansas printer named George Straley, who retired from his $420-amonth (less deductions) job recently, began collecting social security for himself and his wife ($188), a pension from his job ($134), and a pension from his old union ($95). His cash income rose about $20 a month the day he retired.

Straley’s stand on social security: “I like it fine.”

MEN WHO JEER at fickle feminine fashions are due to discard the casual clothes they’ve been wearing for years in favor of trimly tailored, dark-lined and even “elegant” dress. They are, that is, if a $3-million-a-year propaganda barrage backed up by every clothing salesman on the continent and helped by a natural swing away from sloppy sportswear can make “the formal look” stick.

The big push started in the U. S., where men’s clothing makers have banded for a last-ditch assault on hidebound dressing habits. That’s where the big-money propaganda campaign is coming from: but Canadian clothing men are in the same mood. Here are some of their new wrinkles:

The Ivy League approach—After a

long slow buildup a little-padded style labeled Ivy League is now the smartest thing with pants at most men’s shops.

"The lean Ivy look has sparked more buying than any new trend of the past,” applauds Vancouver clothier Murray Lambert. In practice, though, the Ivy influence stops pretty well at the label. “Most Canadian men,” says a Toronto manufacturer, referring to the padless stovepipe-legged suits worn at eastern U. S. colleges, “wouldn’t be caught dead in a true Ivy League suit.”

*■" The “go formal” approach—Manufacturers are promoting evening dress more vigorously than for decades.

* The "catch ’em young” approach— If they can indoctrinate youngsters with a sense of fashion, clothing men reason,

their big market may be ahead of them. In Montreal retailers have enlisted four high schools where codes of dress have been set up for boys. Jeans and windbreakers are out; the kids wear suits or jackets and slacks, neckties in place, or they’re barred. When a boy's parents can’t foot the bill he’s fitted out, in confidence, by the clothing men.

With its big bank roll the U. S. campaign is buying ads and issuing propaganda warning men they may miss that promotion, and boys they may be taken for hoodlums, if they’re not conventionally dressed. A lot of this spills over into Canada.

In the panel that followed, Tracy’s sidekick Sam signed off: “Fellows,

you’ve got something there! I notice in many of our criminal cases the boys involved arc sloppily dressed.” 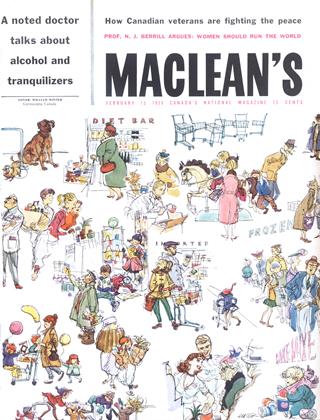