Why not some old-style partisan newspapers?

TALKING THE OTHER DAY to a veteran political journalist, we remarked on the disappearance of old-style party newspapers. Few now are left that proclaim themselves Liberal or Conservative organs, that are wholly in the councils and confidence of their chosen party and speak unvaryingly as advocate of the one and critic of the other.

Most people think this a good riddance. But our journalistic friend disagrees. He thinks the disappearance of the party organ is a loss to democracy.

“It used to be that any government, or any opposition, could count on support from its friends whatever it did,” he said. “It could always get a hearing, always have its point of view set out and its position defended. Now, whenever a party does something the Press Gallery doesn't like, it gets a unanimous drubbing and no defense at all."

There is something to be said for this old-fashioned opinion. The Parliamentary Press Gallery numbers less than a hundred. Add another couple of hundred editorial writers, commentators and similar pundits across Canada, and you still have only three hundred men—the same size as Gideon's army, and a lot less carefully selected. When they are all of one mind, as they often are, we get a solidly hostile or a solidly favorable view of whatever is under discussion at the moment. There always is a case for the other side—after all, no political party is likely to take a wholly indefensible position—but nowadays we don’t always hear it.

Where is our “flaming youth” today?

SOME RECENT EVENTS and statistics have had us pondering the old legend that youth is rebellious, non-conformist and unorthodox. As a result we’ve come to the rather regretful conclusion that the picture we have formed of the young as radical is old-fashioned and outmoded.

The inference may have been true a generation ago but it no longer holds today. Nowadays the people who seem to want to reconstruct society are middle-aged, even elderly; the younger seem bent on preserving the status quo. The CCF, for instance, has become a party of old men, relatively speaking. It turns out that the average age of the C'onservatives in the recent parliament is lower than either that of the Liberals or the socialists.

A couple of weeks ago we were treated to the odd spectacle of a group of masked boys in Quebec acting as self-appointed censors to keep the girly books off the newsstands. A righteous crusade, perhaps, but one we had always associated with middle-aged ladies. Whatever became of "flaming youth”?

The reason for this feeling springs directly from the evidence given before the House of Commons External Affairs committee; the Canadian Club of New York, it develops, doesn’t admit Jews to its membership. Even a Canadian MP can’t get in if he’s Jewish.

The Canadian Club in Canada is a national institution that makes no distinction as to race or creed. Until the New York club is prepared to open its doors in the same way, it has no right to call itself Canadian. 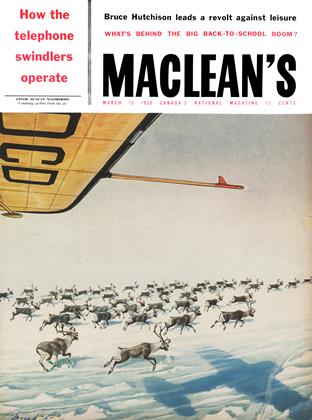