H. L. Cartwright suggests (March 1): Grounds for Divorce — Two Years Apart, and I agree wholeheartedly. However I would like to go one step further and suggest that any divorced persons who wish to remarry should first he required to undergo an examination by qualified persons to determine if they are emotionally unstable, alcoholic or suffering from some mental disorder. If they are normal in these respects then let them remarry. Indeed it would be a great boon it these requirements would be deemed necessary for any MARRIAGE.-MRS. I. READ, EDMONTON.

^ Mankind did not create the idea of marriage, therefore our modern ideas on divorce aie foolish. Mr. Cartwright, please go beyond the civil law ot Rome to the laws of God your creator. God created male and female, the one for the other, in the eyes of God, NO

^ Should divorcees be screened before remarriage? ^ What the Queen Mother saw in Vancouver ^ Are the women to blame for our two worst wars?

^ As a happily married man may I say how thoroughly 1 agree with Cartwright.-A. L. NICHOLLS, VANCOUVER.

^ Any more relaxation of grounds for divorce in Canada will jeopardize the foundations of our country. History proves that all political anarchy in the state begins with anarchy in marriage. If the social basis of Canadian society, namely marriage, becomes rotten, as it will if the grounds for divorce are made easier, our nation will become rotten.— REV. E. L. H. TAYLOR, TEMISKAMINC, QUE.

old guy with a hot potato in his mouth who had earned his place in radio through sheer LONGEVITY.-OLIVE FULLER, COURTENAY, B.C.

How to look at Hastings

Yes, Hastings Street (March 1) is probably the ugliest street in Vancouver unless it is our Cordova Street. But the place from which to view' Hastings and Cordova is not from Burnaby Mountain as Ray Gardner did but from Little Mountain, where they took the Queen Mother to view the Street. She thought it one of the most beautiful sights in the world. She could see nearly the whole city and locate the west end of Hastings Street by the Marine Building with its cake-frosting top, Stanley Park, Burrard Inlet and the North

^ "Hastings” by Ray Gardner makes me think of a saying, "Two men look out through the same bars: one sees the mud, and one the stars.” — D.

Regarding N. J. Berrill’s argument (Feb. 15) that women should run the world—that's nonsense. We have had two big wars since women forgot to be ladies and got mixed up in politics.—

^ Dr. Berrill has an unquestionable right to his zoological opinion of women if he is a bachelor and seeks a change of life. But a familiar quotation

Shooting of a train rohber

1 was interested in reading of the train robbery in the Crowsnest (Canada’s Last Great Train Robbery, Feb. 15), for 1 w'as there within five minutes. I’m also the w'idow of Joseph H. Robertson, the justice of the peace who fired the shot that wounded Tom Basoff, one of the robbers. Basoff confirmed this in Lethbridge prison.

As to Nick Kislick planning to board and search a train (evidently while in motion) that is nonsense. Kislick was not a policeman, therefore had no warrant for searching a train or people.— MRS. H. A. ROBERTSON, VANCOUVER.

^ Your flashback was greatly appreciated, since 1 happened to be one ol the three newspapermen who covered the bandit hunt. The sequel to the ease lay in the arrest some years later of Picarillo, the bootlegger whom the holdup men had been seeking when they held up the train. Picari 1 lo, with his niece, drove up one evening to the door of the provincial constable in Coleman, called him out and shot him dead. Both he and the woman were arrested, tried and sentenced to hang. The sentence was carried out. the first case in Alberta history in which a woman has gone to the GALLOWS.-COLIN GROEF, OTTAWA.

The Day the Iroquois Flew' (Feb. 1 ), by June Call wood, is a superb piece of writing and you are to be congratulated on printing IT.-LESLIE M ac F AR L A N E , 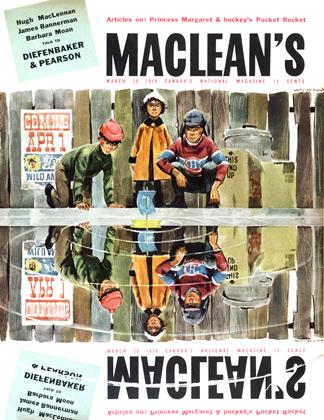