Re Where Do We Stand with the U. S. by Blair Fraser (March 1) — as an American, I am fed up with two-bit editors criticizing Eisenhower and Dulles. Have Canadians no problems of their own that they must advise the U. S. on everything? . . .

I spent two months in Ottawa in 1953 and was disgusted at so many editorials criticizing everything from our foreign policy to the “persecution” of the Rosenbergs. Blair Fraser’s comments sound as if they came from the Democratic Digest. We expect such comments from the opposition but resent it from a good neighbor. In what American magazines do you read editorials telling Diefenbaker or Pearson how to run Canada? It would help if Canada would grow into HER britches and be a good neighbor by minding her own BUSINESS.-MARGARET A. ADAMS, MENLO PARK, CALIF.

** Apropos of the controversy between the U. S. and Canada over the alleged effrontery of improving our trade position with Britain, may I quote Kipling (with variations and apologies):

A Nation spoke to a Nation,

A Friend sent word to a Friend, "Good Neighbor am / to the South Land

Rut Mistress in my own.

The gates are mine to open,

As the gates are mine to bar,

The mark of a swindler

It's high time an article was written like Eric Hutton's They'll Swindle you by Telephone (March 15). Many of us

have been victims of this hoax. Advice to suckers such as I: don't give a cent to any man who won't look you in the EYE!-MRS. ,I. W. BARKER, TORONTO.

^ Telephone swindlers seem to be in line with narcotics and other addicts and should get the same penalty. —

The facts on pensions

In Maclean's (Feb. 15) under the headline Pension Preview, is the following phrase: “In, say, Newfoundland. (Professor) Huson told a press conference, Health Minister McGrath already objects that a husband and wife who are paid $110 a month are often drawing more money than they've ever earned in their lives.” Professor Huson has al-

ready denied he ever made this statement. Whether or not he made it, I certainly never made the statement attributed to me, or any remotely like

it. - JAMES MCGRATH, MINISTER OF

In his article, The Coming Revolt against Leisure (March 15), Bruce Hutchison has not gone deep enough. We are not purposely working toward

more leisure. Actually, we are a rudderless ship, driven wherever the biggest profits take us. Shorter working hours, greater leisure and unemployment are only some of the products thrown overboard during this aimless VOYAGE.-W'. T. HOUSE, WEST GRAVENHURST, ONT.

Whose headache is traffic?

In your editorial, City Traffic is a National Problem — We Should Face Up to It (Feb. 15), you promote the utmost nonsense. Why should people of Joe Balt’s Arm, Nfid., or Cabbage Hollow, Ont., feel any responsibility toward the people of Toronto building a 200-million-dollar subway? This is a local problem and the people of Toronto should face up to IT.-R. A. SULLIVAN, TORONTO.

McKenzie Porter, as usual, did an excellent story on Exactly who is James Bannerman? (March I). Just one tidbit he might have pointed up—Bannerman's whimsical efficiency as a prolific producer, a boon to me when I was managing editing Mayfair. Observe his pen names: Austen, George; Bannerman. James; Carter, Mark; Davidson. Peter: Elliott. Robert. He had a character for each, too: epicure, short-story writer, book and record reviewer. But another pseudonym, Lajos Dohanyi Lajos, was strictly from left field. — WELLS RITCHIE, WH1TEVALE, ONT.

^ I have listened to his CBC broadcasts for years, and always the voice sounded familiar. Now I have the answer. I was Lt. Cmdr. McNaught’s secretary when he was stationed in Halifax with the RCN during the war. I think McKenzie Porter has given an excellent picture of McNaught, alias Bannerman. -M. JEAN MaCLEOD, RIVER JOHN, N.S.

^A plea for schooling ^How to lower flag

I» Background (March 1) you say one in ten scientists working in Canada was hom and educated outside Canada. We would have more Canadian scientists and technical experts if we gave all learned children a chance. In many European countries such children have a university education no matter how poor they are.

Montreal's Sherbrooke Street (Feb. 1) has been ruined with overly zealous shopkeepers trying to outdo one another with jutting signs and neon lights. Can you imagine Fifth, Park or Madison Avenues in New York with an uncontrolled situation such as this? I am a former Montrealer who gets fightin’ mad every time 1 return on a visit to see Sherbrooke Street get gaudy and CHEAP.-MRS. JEAN

How veterans see themselves

Thanks for John Clare's How the Veterans are Fighting the Peace (Feb. 15). I think it shows us. as an organization, just where we are going. He has expressed what the public thinks about the work we are DOING.-LEGIONNAIRE LEN A. TAY-

** I could not help but notice the headline picture in How the Veterans are Fjghting the Peace. It showed a row of grounded flags. I was always under the impression our flag should never be allowed to touch the ground. — w. E.

Canadian Legion bylaws say the flag is “dipped” (touches the ground): at the sounding of the Last Post and the playing of God Save the Queen in the Remembrance Day Ceremony; during the color drill at the command, “Royal salute.”

It's high time we heard more about alcoholic addiction (A Noted Doctor Talks About Alcohol and Tranquilizers, Feb. 15). But how is education elsewhere being carried out? By glamorizing social drinking in movie, radio and TV plays, by fiction writers whose heroic characters appear to subsist on rye. brandy, martinis, by advertisements depicting its use in attractive surroundings without, of course, giving any indication of the ugly aftermath. When alcohol has achieved its toll of degenerates Mr. Khrushchev should easily take over the WEST.-JAMES

I have just read Grounds for Divorce— Two Years Apart, by H. L. Cartwright (March 1). The laws -T our land are based on the teachings of the Bible. Mr. Cartwright is no doubt right that manmade rules are faulty. But the laws and teachings of God are perfect and they work. Why don't we follow them? — MRS. B. WHITFORD, LUMBY, B.C.

If Mr. Cartwright were writing from a non-Christian point of view I should

have nothing to say. However, he makes reference to Jesus Christ's teachings, and quotes John Milton’s idea that “divorce by mutual consent is more consistent with the spirit of Christianity.” There is no foundation in scriptures for such a statement. Christianity according to Oxford is: “the system of doctrines and precepts taught by Christ." The very idea of permanency of marriage first came from God. It did not originate with any man. Divorce is even more to be deplored than POLYGAMY.-GLADYS HAMERSLEY, COMOX, B.C.

^ When human beings are coerced in the guise of Christianity to perjure their minds, souls and bodies in perpetration of a meaningless vow, it is high time for some constructive, intelligent reasoning. Thank you, Mr. Cartwright.—

How our covers rate

Rex Woods’ cover picture of sailors lining up for photos (March 1) is the most fascinating, lifelike sketch 1 have ever SEEN.-MISS E. M. ANSLEY, MONTREAL.

Can't help saying William Winter is a genius. 1 doubt if there’s anyone who could equal his perfect perceptions in a

More about the Klondike

When are we going to read more stories like Klondike Annie? This was not the title, but I will always remember the woman who goes to the northwest to teach school, gets married, raises a family, bakes sourdough bread and has oh so many experiences. As each installment was read, I thought how Marie Dressier or Marjorie Main or possibly C. Colbert would be in a movie based on the Maclean’s story. - JOSEPH G. ACKER, FLUSHING, LONG ISLAND.

The story was I married the Klondike, by Laura IL Perton. Another series on the Klondike by Pierre Perton will appear soon in Maclean’s.

The facts on tin plate

In Blair Fraser's interesting article, “If We Had Free Trade with Britain,” the statement is made: “Tin plate now comes in free from Britain: after the tariff is renegotiated, the British preference rate will be ten percent.”

The fact is that of all the tin plate used in Canada, the preponderance is of a kind that, if imported from Britain, would be subject to 15% duty. The oily tin plate presently free from Britain would be that of a kind not made in Canada . . . Our tariff board has recommended that the present rate of 15% be reduced to 10%. Hence if the tariff-board recommendation is implemented. British tin plate will secure a new advantage in the Canadian market instead of being subjected to a higher rate of duty as Mr. Fraser has suggested. 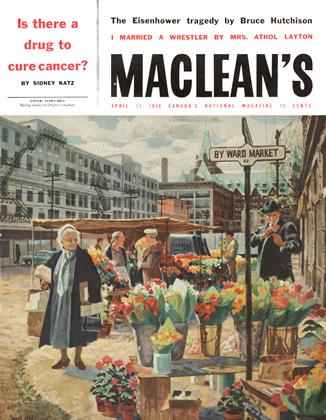