THREE CHEERS FOR your editorial on the sack (We Declare War on the Sack Dress, April 12). How silly can women get? How would they like to see men wearing suits six sizes too large? Wearing the sack should be grounds for divorce . . .—o. w. HUMBLING, OYAMA, B.C.

* What’s the matter with Paris and New York that they foist ugliness on us females? At any age we’d rather have

* Recruits for our war against the sack

* Should only Americans talk about Ike?

worn pink tights or a fitted coat of mail than have covered up our natural shape under this hideous SHROUD.-NINA

* Is the cold war an economic necessity?

* I’m also concerned with the "insult and injury to the female form.” Let us men UNITE!-RICHARD KNAPP, LENNOXVILLE, QUE.

* . . . What better way than the sack for a young man to tell the sheep from the GOATS?-MRS. MURIEL NICKEL, OTTAWA.

* ... A sack dress looks attractive on a model in a dress shop but most women should leave it there. This is one instance when I think the men are right.

* Just when did men get the right to dictate to women what they could wear? Men who have the nerve to pioneer in fashions are the males admired by women. You say a man should divorce a wife who wears a sack. Can you picture a courtroom, a man and his wife before the judge who asks why the man wishes to have his marriage dissolved. The man replies, "My wife wears chemises.” Oh, really sir!—

»" Here’s one male who will not join your crusade against the sack. The staff of our women's-wear newspaper (Style) is proud of the fact that we hurried the advent of the chemise into Canada by at least one season. Garment manufacturers in Canada had some doubts about the acceptance of the chemise but we managed to convince both manufacturers and retailers that the chemise is THE thing for the gals. Whether you like it or not, the chemise is here to stay for a while. It’s smart, comfortable . . . and sexy. TOO.-MAURICE LUCOW,

I wish to protest Bruce Hutchison’s attack on President Eisenhower (The Eisenhower Tragedy, April 12). It was pointless and cruel, no matter how true the facts may be. Criticism of Mr. Eisenhower should first come from his countrymen . . . They elected him . . .

The Eisenhower Tragedy by Bruce Hutchison should have been The Hutchison Tragedy. He is slipping . . .

^ Do Canada’s journalists find this country so devoid of faults that they must bemoan affairs in the friendly neighbor to the south? Or is there so little going on here that Canada has to look to the nearest source for news?

Can we end the cold war?

Your editorial. Wanted at the Summit: New Concepts and New Labels (March 29), implied a fact apparent to everyone. We need the cold war. Visualize the results if all countries kissed and made up. All troops would be called from foreign lands. Cutbacks would be made in armies. Thousands would be added to the labor force. Armament manufacturers would beat their war machines into saucepans. Need I sum it up? Western nations would go into

an economic tailspin such as the world has never seen. No, we cannot give up the cold war, but let us admit it.—

I enjoyed your story by Mrs. Athol Layton (I Married a Wrestler, April 12). They are members of our community, a lovely couple, and 1 can’t see how people can be so mean to them . . . If they could have seen him at the School Fun Fair playing games of chance with the children they would know he’s not a BRUTE.-MRS. R. WOODS, TORONTO.

The Best Fishing Hole in B. C., by Vernon Hockley (April 12). is not I hope my native province. This poorly written nonsense is further embellished by the insert, “B. C.’s Birthday Party. This British Columbia story — by a B. C. author — is part of Maclean’s salute to the province’s centenary.” Few B. C. people will appreciate such tripe being so labeled.—w. N. CAMPBELL, VICTORIA.

The Rev. R. G. Matthews says (Mailbag, March 29) any relaxation of grounds for divorce would make our nation rotten. Pure drivel. I have traveled in England, Australia, New Zealand, U. S. All these have a far more relaxed divorce law than Canada. The question I would like to ask the critic—do you believe all these nations are ROTTEN?-DESMOND RICKARD,

^ Anyone who advocates NO DIVORCE not only shows ignorance of human nature, but selfish indifference to the feelings of people affected by our ridiculous divorce laws. Religious fanatics have caused more trouble in this world than many THINK.-A. LEE, LONDON, ONT.

* If all couples about to take marriage vows had first taken God into consideration there would not be need for divorce. But let me ask: how many marriages are planned ACCORDINGLY?-MRS. G. A. METCALFE, WINNIPEG.

If people spent more time thinking about marriage before entering this oneway street there would be fewer people wanting to discontinue this holy union. Just because murder becomes popular does not mean that it is right . . .-ROB

r* If Mr. Matthews has read Genesis he should know the Israelites believed themselves chosen people. Their law was from God; yet it allowed divorce . . .-REV. C.

A touch of Aesop in Maclean’s

Nothing has appeared in your magazine for years as refreshing as The Best Years of Their Lives, by John Norman Harris (March I). So true and accurate is the writer’s insight into present planning by personable personnel experts and so apt his understanding of people that the tale appears almost allegorical. Aesop knew the quiet thinking of the Goulds when he made the tortoise win. —IRENE DOOLE, TORONTO.

A vote for big families

Nothing but a family can provide a place for a child to grow and learn . . .—

Was money ever tight?

When Bruce Hutchison says (What Went Wrong With the Boom, March 29). “Actually tight money never existed,” he is adding confusion to a confused subject. Economic theories can be argued back and forth but even economists rarely agree. Mr. Hutchison states something untrue and in doing so becomes himself a victim of confusion.—w. j. NOXON, TORONTO.

In your Preview on British TV (March 15) you say Lord Altrincham is a “controversial figure.” Over here he is nothing of the sort—we regard him and his kind as petulant ADOLESCENTS.-REV. W. P. WEBB, RECTOR OF BASCOMBE, SUSSEX, ENGLAND.

There is a flaw in your plea. Why Not Some Old-style Partisan Newspapers? (March 15). People in areas with a single newspaper would be subjected to a very prejudiced account of Canadian affairs. Partisan organs invariably show the other party as holding the “wholly indefensible position" which you correctly' point out is seldom if ever the CASE.-T. L. BASKERVILLE, FREDERICTON, N.B.

Why Pick on Peyton Place? (Blair Fraser’s Backstage, March 15). From a would-be book burner’s point of view By Love Possessed is far worse. It contains among other things a lengthy lyrical description of the bedroom activities of a married couple which at best is in bad taste and at worst thinly disguised pornography. Yet not a peep out of the Rev. Mutchmor.—p. LOCKWOOD, WESTON, ONT.

Your question. New Laval-Duplessis Feud? (Preview March 29), is hardly borne out by the quotations given, only one of them referring to Mr. Duplessis. 1 am sure that, except perhaps for Mr. Bergeron, none of the contributors to the April issue of the University of Toronto Quarterly intended to take Mr. Duplessis as “TARGET.”-CHARLES BILODEAU, SILLERY, QUE.

Maclean’s erred in presenting all four Laval contributors to the U. of T. Quarterly as critics of Duplessis. For this we apologize to the writers and to the Quebec PM.—The Editors ic 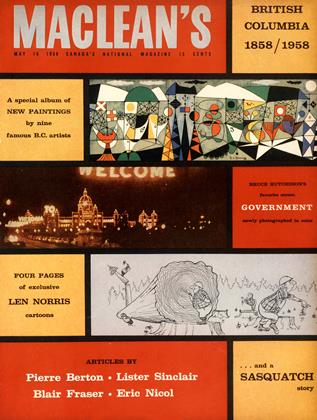