Johnny Longden, the incurably rich jockey who has won 5,150 horse races—better than two hundred more than any other rider who ever lived— was lying on his back on a big red-leather divan watching one of his seven television sets when his wife Hazel led me into his den. His legs were raised in the air like the rabbit-ears of a TV set. There are better similes, I’m sure, but there is none more apt. Through all the evenings of our conversations there was a pitched battle for his attention between me and Annie Oakley, The Lone Ranger, Wyatt Earp and countless other westerns that crept, Indian file, across his screen.

He was lying on his back in this fashion because, six months before, he’d broken his right leg in two places just above the ankle in a racing accident, and this was a comfortable position for him to massage the still-swollen ankle. When he was sitting up watching, he’d stretch out his legs and prop his bare feet on a five-foot-square coffee table in front of the divan, and then occasionally he'd roll like a tumbler onto his back, raise his legs and massage his ankle again. He’d peer past his right leg at the set.

Sometimes in a typical session I'd say: "Johnny, I’ve read that when you were starting out, things went so badly that you once stole a carrot from a horse’s stall to live on. Is this true?’’

Before the next question I’d wait until his eyes left the set and turned to me.

So 1 discovered that really the best time to talk to him was at six o’clock in the morning at the Santa Anita race track where, in spite of the pain in his ankle that caused him to limp heavily, he worked horses every morning. When he'd come down off a horse I’d ask several carefully prepared questions before he could climb up on another one.

He seemed to me to be a withdrawn man, solemn and a little remote. He rarely expanded on an answer. When I asked him about his favorite horses he invariably named those whose courage he admired. He mentioned a few of small account but he had his reason. “That one hated to lose,” he said of half a dozen. “Anybody beat him. he knew he’d been in a horse race.” I got the feeling that this was the story of Longden's life, too. He just never quits.

Unemotional in conversation, he never grows excited around the track either. His son by his first marriage, Vance, who is twenty-seven and is a trainer, says his father shows the same impassive reaction to winning a $100,000 stakes as he does to winning a $4,000 claiming race. Johnny’s wife Hazel, a tall pleasant blond-haired girl in her midthirties, says he’s intrigued conversationally only when he’s talking horses. In a recent magazine article it was reported that Hazel flared up when someone mentioned her husband’s size. "He may wear a size-four shoe but his neck is fifteen and a half." she was quoted. "You should see his biceps. He's more man than most six-footers.”

She didn’t flare up when I asked her if Johnny’s size concerned her. “It never occurs to me.” she said.

Longden is a shade under five feet, about six inches shorter than Hazel. His legs are short but his upper body is thick-chested and well muscled, and his arms are rounded like those of a fighter. His hair is black and sparse, his face deeply lined and etched with tiny wrinkles. His clothes are neat, conservative and expensive. Even in the informality of the early-morning workouts, riding four and five horses and going into the stalls to check those with ailments, he wore a light-brown tweed jacket, matching trousers, a soft cashmere cap and shining hand-stitched riding boots.

One morning I propped the back of a wooden chair against the side of his barn and sat there in the early sun waiting for him to come back from galloping a horse on the training track near his barn. An old groom, his face lined and leathery. was cooling out a horse nearby, holding its shank, or bridle, and leading it in a wide worn circle where he’d presumably walked hundreds of hots before. As he came near the barn he grinned and then stopped walking and his face grew thoughtful.

"I don’t get it," he said without preamble. "People say the little guy is tighter than a dead heat. You know, this isn’t true at all. I’ve known him for years. He’s taken inferior mounts from people down in their luck when he could have had horses that figured to win. He's won with the inferior mounts, too, and got a purse for these people, because he’s a helluva man on a horse. He’s often loaned these guys money and he’s even put up the nomination fee for them.”

The old groom started to walk again then, because his horse was growing restless, throwing its head and pawing the ground, but when he’d completed the long circuit he picked up where he’d left off.

“He’s the old tradition of racing, John is, from the days when people around the race tracks helped a guy down in his luck,” he said. “Nowadays, I don't know, racing’s changed. We’re not the tight-knit community we used to be, moving from track to track. Nowadays some of the people in racing would claim a man’s last horse. Not John. He’s the old school.”

There were other incidents to refute an ancient theory in racing that Longden is tightfisted (in Toronto a man had said, “It’s not true that Longden has the first buck he ever made; with his first buck he bought his wallet”). A wealthy Calgary owner told me that Longden literally enabled the racing season to open in Winnipeg one year by lending ten thousand dollars to the late R. James Speers after the banks had rejected his bid for a loan. Speers, a Winnipeg breeder, was the kingpin of western racing in the Thirties. 1 asked Longden about the loan at his home one evening, and he took his eyes from his television set and looked at me for a long moment.

"Do you get these western programs up in Canada?” he asked, pointedly.

I smiled and said yes. When he smiled too I said, "What about the loan?”

"Well,” he said after a moment. "I guess Mr. Speers had his back to the wall. He said he needed some money for three months. If he didn't get it he said racing might fold. So 1 sent him some money.”

I asked if the money had been paid back in three months.

“Oh, he phoned and said he could pay it back but he could use it a little longer if I didn’t need it right away.”

In some ways Longden leads a Spartan life. He doesn’t smoke or drink and must watch his diet because excess weight has ended the careers of more jockeys than anything else. Eating mostly proteins and boiling daily in a steam cabinet, which he hates, Longden can hold his weight at 112. He says he’d hit 122 if he indulged often in the desserts he loves. He eats only one meal a day, has a cup of black coffee for breakfast and a cup of tea with saccharine for lunch.

I asked him one morning as we walked from his barn to the track kitchen if he ever missed the food and drink and social evenings he gives up for racing.

“Sure,” he said, limping along on his mending ankle. “You bet. But I figure it’s worth it. I got a lot I’da never got.”

We walked along a little farther, heading for his cup of coffee, and then he said, “I guess you never worked in a mine, eh?”

It was nearly forty years since he’d shoveled coal in the mines of southern Alberta as a boy of fourteen, but he hadn’t forgotten,

Horses carried the boy from Taber to an unprecedented 5,000 victories and a life of luxury—but his workday starts at dawn and each pound is an enemy

brought him far more than the normal measure of material possessions. His home on Lemon Avenue in Arcadia; about twenty-five miles lrom Los Angeles centre, is a seven-room, fourbathroom, ranch-style bungalow. His property contains a swimming pool, a three-car garage for his long black Cadillac sedan, his Lincoln Continental and his Chevrolet station wagon, ind a stable where he keeps a Palomino pony called Prince, which the children ride. Hazel las five toy poodles which scurry around the louse in tiny bedlam.

The central room of Longden's home is the den. Along the walls of it are color pictures of lis favorite horses. The pictures are rear-lighted and superimposed on glass. There are three pictures of the greatest horse he says he ever saw. Count Fleet—pictures of Longden riding Count Fleet to victory in the Kentucky Derby, the Preakness and the Belmont Stakes in 1943. And there’s a glass-faced collector cabinet filled with silver trays and urns and cups and miniatures, all of them mementos of his high moments in racing. One is a stopwatch inscribed, “Johnny Longden — 3.000 winners.” It was a gift of the Bay Meadows track near San Francisco where he won his 3.000th race in 1952. Each word is written in diamonds. The watch is worth ten thousand dollars.

He has a gun cabinet containing a dozen guns made with special cut-down stocks and barrels to suit his size. He owns a five-place Cessna-190 airplane in which he and Hazel and his son Vance often go hunting in Utah or in the Canadian Rockies. He and Hazel each bagged an antelope on one trip and they have the heads mounted on the walls of the den.

They lead a quiet social life. He retires at nine because he gets up at 5.30 to go to the track. But when he's riding at Del Mar, a beach resort on the Pacific near San Diego, the Longdens see a few of their friends from the movie colony. Betty Grable and Harry James are close friends of theirs and so are Vicki and Jack Oakie, and Lucille Ball and Desi Arnaz.

Longden has seven television sets in his home. He has a large color set in the living room, and the 24-inch black-and-white screen in his den is part of a large combination record-player. The two children he and Hazel have had. Eric who is fifteen and Andrea who is ten, have a set in each of their bedrooms and Longden himself has a set halfway up the wall of his bedroom which he can control from the bed and which he can watch lying on his back. He has two portable sets and when he goes to the bathroom to sink his aches and pains into a whirlpool bath or to settle into a steam cabinet he takes one with him. He has no elaborate explanation for this uncommon dedication to the tiny screen. “I like television,” he says in lavish understatement.

And there’s no denying he loves riding race horses too. By late last month Longden was the leading rider at Golden Gate Fields, near San Francisco. In his first 106 mounts he’d scored 34 victories, had 27 seconds and 14 thirds. 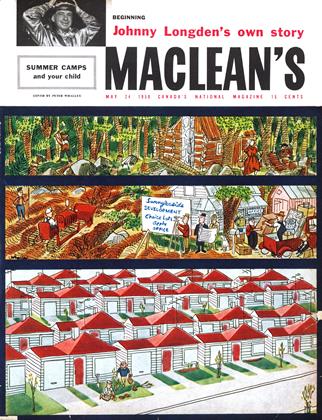