If we’ll stake our lives on DEWlines, why not on negotiation? June 21 1958

THIS COUNTRY’S two best-known instruments of military defense have again come under public discussion within the last few weeks.

The governments oj’ Canada and the United States have hinted officially that the DEWline is obsolete.

So, it has been charged by a number of intelligent people, is the CF-105 Arrow, Canada’s most modern interceptor plane.

There are other intelligent people, including many in places of authority, who deny both these nervous assertions. Let the Russians attack over the roof of the continent, they say, and the DEWline will detect them hours before they can reach their targets. Our Arrows, amply warned, will rise to meet and destroy them.

This pattern of attack, defense and victory depends, of course, on certain minimum conditions. The Russians must use bombing planes or, at the very worst, air-breathing guided missiles. They must not use long-range ballistic missiles. Sputniks or other weapons traveling at speeds and through regions the Arrow and the DEWline cannot reach or comprehend. Unless the attacking force does come within these specifications, even the warmest champions of our present first-line defenses admit that they are, indeed, already out of date.

Behind this endless and not very fruitful debate about individual radar chains, individual aircraft and individual rockets, one blanket truth—a truth covering all instruments, all weapons and all foreseeable occasions—is fast emerging. It is not just the DEWIines and the Arrows that are obsolescent. Military defense itself is obsolescent.

We can still defend ourselves to some degree by threatening the potential enemy with at least as much destruction as he threatens to inflict on us. In that sense the deterrent remains a means of military defense. But once either side starts shooting— and either side will surely mean both sides—all their science and inspired gadgetry will have little more protective value than a row of muskets. Once any major atomic attack is launched, the chance of repelling it wholly or even substantially will be almost negligible. Even the optimists seldom rate the odds against effective military defense at better than 10 to 1. The pessimists put them closer to 1,000 to 1.

Perhaps we have no choice but to take the risk, however one-sided. In the atomic lottery on which every living being’s life depends, it is slightly better to have our hopes riding on a thousand-to-one shot than to have drawn a non-starter.

But if we’re willing to gamble millions of lives— not to mention billions of dollars—at such forlorn odds in the military field, why are we so reluctant to gamble at similar or conceivably better odds in the political and diplomatic field?

No doubt it’s somew'here in the range between ten to one and a thousand to one against that the Russians are really and at last prepared to talk disarmament and atomic control in all seriousness and some good faith. But if such odds, unattractive as they are, are worth taking in a clash of machines and bombs surely they're worth taking too in an equally fateful clash of minds and wills. If we can justify our costly and almost-certain-to-be-useless DEWIines and Arrows on the ground that they're better than nothing at all, why can’t we justify summit conferences on the same ground? 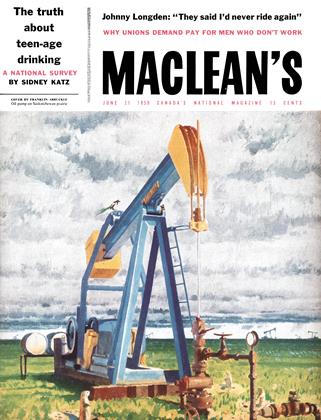