LOOK FOR A TOUGHENING ATTITUDE toward Canada's 425,000 teen-age drivers by governments, police and insurance companies. Reason: latest figures show they're twice as accident prone as older drivers and their accidents cost 20% more in lives, injuries and property damage.

Many provinces are studying a system recently adopted in C onnecticut— teen-agers remain on probation as drivers until they're 21. drive; had drivers don’t.

MACLEAN’S JASPER is going to work in some of our national parks this summer — on posters warning you not to feed the bears. National Parks junked the previous poster after deciding they were too forbidding (left) and might scare tourists away not only from the bears but from the parks, the parks Before Jasper people asked Maclean's and artist James Simpkins for permission to draft Jasper, who’s been treating humans with a firm hand for years on these pages. We agreed and Simpkins produced the poster (right) which is now to become standard equipment.

CLOAK-AND-DAGGER FANS may get a further “inside” on RCMP agent John Leopold’s already famous inside story on Soviet spy operations in North America. Unknown to anyone, Leopold, who died a few weeks ago, had been writing his own story ot his adventures as an undercover agent. The uncompleted manuscript turned up in a search ol his desk.

It won’t be released until his estate is probated.

TOM PATTERSON’S SAFARI to the West Indies to arrange a musicand-drama festival for Princess Margaret’s recent visit is going to result in a new calypso influence at the Stratford Shakespearean festival, Patterson’s baptismal project. Lhe West Indies show was such a hit it will be held every two years on different islands. “We hope lor a longterm cultural exchange,” says Patterson, "by sponsoring West Indian features at Stratford and sending the Stratford company there on tour.

HAVING UNVEILED HER HOCKEY PLAYERS in Canada, Russia will next he asked to let us see some of her most closely guarded art. National Gallery director Alan Jarvis, who will lead Canadian painters and sculptors on a tour of Russian galleries next fall, will also ask the Soviet to permit a showing of Leningrad’s Hermitage masterpieces in Canada. Including several Rembrandts, they vc never been shown outside Russia. Meanwhile, a group of Russian friends here is planning to send Canadian reproductions (A. Y. Jackson, 13. C . Binning, Tom Thomson) to Stalingrad.

FAR FROM BEING DISILLUSIONED with politics after her defeat in the federal election. Charlotte Whitton’s planning to toss her bonnet into all three rings—federal, provincial and municipal—il necessary to get back in government. Next tall, she tells friends, she ll either go back in Ottawa's mayoralty contest or try for the provincial seat held by 8()-year-old George Dunbar, if there is an election. In the meantime, “I’ll do more for Ottawa West outside parliament than George Mcllraith (who beat her) will do in it.” she says.

EVERY CANADIAN CITY fighting for a larger share of provincial tax revenues will watch with hope and envy an impending move by Saint John to challenge New Brunswick's sole right to liquor-tax revenues. The city's case is based on a 1785 charter by Governor Thomas Carleton, conferring on it the power to license taverns for liquor sale. Did the province’s 1927 decree establishing a Liquor Control Board abrogate this right?

Saint John’s mayor W. W. Macaulay says no and wants to fight lor the $1 million a year the province gets from liquor tax in the city.

NEXT BIG THING in

Canadian TV will be videotape, an electronic invention destined to remove the problem of network time zones. On July I. the day CBC starts its new coast-to-coast microwave network, it will also put six Ampex videotape machines to work in Calgary registering eastern programs. Both picture and sound will go on the

Rimmer: first on tape? same tape instantly and, without any of the processing necessary with film,

CBC will be able to retransmit the shows any time—within a minute, an hour or a year.

What is it? As Maclean's reported (Oct. I?. 1956) videotape is a tape coated with magnetized particles that re-arrange themselves in response to picture and sound signals. First Canadian face on the new tape will probably be singer Shane Rimmer’s. His evening show. Come Fly With Me. will be seen live from Sydney to Winnipeg

and videotaped in Calgary where, owing to the time difference, it will be late afternoon. So CBC will wait a couple of hours before retransmitting from Regina to Vancouver at a better viewing time.

W hat will it achieve? For the networks it will mean money—they can guarantee sponsors an 8 p.m. show, say. from coast to coast. They can also save studio space by producing shows at slack times for later transmission by videotape — as faithfully as it the show were live.

Will it replace present TV? All evidence says yes. Videotape is cheaper ami more compact than film or kinescope: experts say you can t tell it from live TV. The recent performance of the Victor Herbert musical. The Red Mill, in the U. S. appeared so sharp to those watching it on I V that critics widely reported it was live — it was partly videotape.— BARRARA MOON

WITH THEIR personal savings now at a record level. Canadians and Americans are getting ready for a vacation spending spree that promises to be the biggest in Canada’s history and could make important breaches in the current log-jam of recession. Ten million Americans are expected to holiday in Canada this summer. Vacation spending by both Americans and Canadians in this country will probably exceed $700 million, up 25%.

Evidence: Tourist enquiries in Ottawa alone are running at an unprecedented 10,000 a day. Motor leagues say trip enquiries indicate more people will travel farther on better roads in Canada than ever before. (Oil-company trip-planning services are 25% busier than in 1957.)

Costs: Vacationers will get a break;

travel-hotel-motel prices have increased less than any services in the past decade and not at all in the past year.

Luxury hotels have dropped rates $1 a day. Prices in Canada’s 72.000 motel rooms range from $4 to $8 (no increase) and service is reported better.

ALTHOUGH CANADA’S pro football clubs have been warned by almost everyone, including their own executives, that $600,000-a-ycar budgets can only lead to ruin, this figure is almost sure to go higher next season—and higher after that. I he reason is that Canadians’ attraction to football is apparently limited chiefly by the size ot stadiums and the quality of competition. Give them good close games in bigger parks, and they’ll meet increasingly higher costs.

The above is not a sports writer daydreaming. It s the gist of the first formal business-management report on the status and future of Canada s pro football. Tired of the traditionally loose approach to football economics ("Give us a winner; we ll pack the park ), businessman - oarsman -footballer Jake Gaudaur, who is president of the

Grey Cup champion Hamilton TigerCats, persuaded his city to shell out $5,000 for an impartial business report on "whether we’re really headed for ruin.” Answers (by the management firm of J. D. Wood and Gordon Ltd.): ^ There’s a steady “underlying growth of public interest in pro football. No city has recorded a downward trend in attendance.” (A 32,000-seat stadium is suggested for Hamilton; present capacity, 19,000.)

^ Major cities with a contending team can expect to fill 80% of the scats in their parks—and most could stand bigger parks. Average game attendance should increase 10,000 by 1965, except perhaps in Regina, where saturation has almost been reached, and Calgary, where past attendance may not justify a bigger stadium.

^ Tip to Toronto and Calgary: get a better 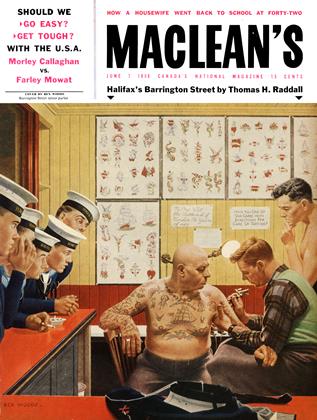