A Calgary father was enjoying a trip to the St. George's Island zoo with his kids until he discovered that a shiftless-looking character was following their little family party everywhere it went. From the monkeys to the bears to the lions, he never took his beady eyes off father. The somewhat distraught parent was about to call a cop when he happened to glance down and discovered a five-dollar bill sticking out of his trouser cuff, where it must have tumbled while he was buying ice-cream cones a few moments before. As soon as father pocketed the bill he lost his allure, and the seedy one vanished.

A Toronto motorist just about turned in his license plates and decided to walk, after what should have been a lucky break. He found a vacant spot beside a parking meter, that’s how lucky he was, and he deposited the required coin and walked away whistling. He was back within the prescribed time limit, too, but in the meantime two things had happened. A city work crew drove up, sawed off the meter post at its base and drove off with it, because a brandnew office building had just opened its doors at the spot and parking isn’t permitted in front of important edifices. Then a cop came along, saw the fortunate motorist’s car parked in front of the splendid new office building, and hung a tag on it.

arm of Kootenay Lake at Nelson, B.C., suddenly found that he’d run out of money. Without a moment’s hesitation he handed the toll keeper a nice new shirt in lieu of fare, and drove off before the startled official could either complain or say thanks.

An oversize lady was seen trying to squeeze an oversize parcel into her purse the other day on a Winnipeg bus. When it wouldn't go in she sat on it. Then it went in.

If Alberta schoolteachers finished the year even wearier than those elsewhere it was because in addition to marking all those papers they had to fill out an endless questionnaire for the Cameron Commission as part of its study of education in that province. The questionnaire went exhaustively into each teacher's

training, length of experience, number and age of children being taught, and left no loopholes anywhere. For instance

Wanting to treat a dear old rather deaf friend to an afternoon out, a Vancouver woman took her to the movies. With some slight misgivings she selected a widely acclaimed love epic for their entertainment, but her venerable friend became genuinely absorbed in the story as it unreeled to a passionate climax in a boudoir. Suddenly through the rapt silence that gripped the entire audience the old lady exclaimed, “Land sakes! Who'd a’ thought those iron beds would be coming back!”

Sign in the driveway of a church in Orillia, Ont.: “Thou shalt not park

Dumb animals aren't the only pets that have societies to protect them. A Toronto man who decided he could no longer afford the upkeep on his somewhat more than secondhand car—a vintage '29 phaeton—advertised it for sale

and got a phone call as soon as the

paper was out. The caller asked a lot of interested questions but finally confessed he didn't want to buy the car. “I’m president of an antique-car club and I just want you to promise me you won’t let it fall into poor hands," he explained. “It would be dreadful if some farmer turned it into a truck or something.”

PARADE PAYS $5 TO $10 for true, humorous anecdotes reflecting the current Canadian scene. No contributions can be returned. 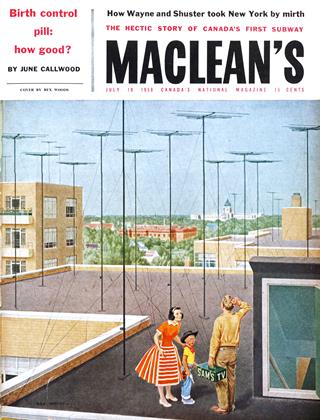