THERE WAS A FLURRY in the

House of Commons when Yvon Dupuis, the new' Liberal MP for St. John, Que., made sarcastic remarks about the “political marriage” of Premier Maurice Duplessis and Prime Minister Diefenbaker. "A simultaneous translation,” Dupuis called it, and went on to proclaim that Duplessis had been chosen Quebec Conservative leader in 1933, that he had never been replaced, and that "he is still Conservative chief" in that province.

Cries of "A l’ordre" arose from the government side. The new deputy speaker. Col. Pierre Sevigny, told the Liberal MP to “adhere to the rules of debate,” though when Dupuis asked what rule he was breaking he got no definite answer. (Any subject may be discussed in the debate on the address in reply to the Speech from the Throne.) But whether the rules were broken or not, there was no doubt that Quebec Conservatives’ feelings were ruffled.

It is not so clear just w-hy they were annoyed. Did they resent Dupuis’ words as a slanderous reflection on the prime minister, as their English-speaking colleagues would have done? Or were they angry and disappointed, instead, because they had found that the “marriage” did not lake place, and that the Union Nationale was still waiting at the church?

The gibe itself was by no means new. All through the election campaign in Quebec, the Liberal campaign against English - speaking Conservatives like Postmaster-General William Hamilton in Montreal was focused on “DDT”-— the “Duplessis - Diefenbaker Tie - up.” Hamilton and the other English-speaking candidates kept saying that there

was no tie-up, no special private deal with Quebec or any other province, but the denials were disbelieved by all Liberals and perhaps by some Conservatives too.

Now some of the skeptics arc beginning to doubt their own doubts. There is no evidence yet of any mutual cooperation between the Diefenbaker government and Duplessis’ Union Nationale. What evidence there is seems to point the other way.

It is admitted, of course, that the Union Nationale did work for the Conservative cause in many ridings. In Quebec East, for one example, the U.N. used every weapon in its arsenal to beat young Maurice Lamontagne in Louis St. Laurent’s old seat. Many other Conservative candidates were also wellknown figures iq the Duplessis entourage, and quite a few of these were elected. Union Nationale politicians are notoriously practical folk, so it is a fair guess that they expect some reward for their labors. So far, no sign of a reward can be discerned.

An outstanding case in point was the selection of new cabinet ministers from Quebec. During the interval between election day and the opening of parliament, the dope stories from Quebec City and Montreal had an unusual ring of assurance. Quebec would of course get back the portfolio of public works, that onetime orchard of political plums —C. E. Campeau, a staunch Du Assiste who used to be director of planning in Montreal, would be just the man for this post. Justice, too, was one of Quebec’s preserves, and the man in line for it was Noel Dorion who had resigned as Duplessis’ chief crown

prosecutor to run in the federal campaign. No doubt some other jobs would be found for Howard Green and Davie Fulton, though not much attention was paid to this point.

When the appointments were announced, it turned out that Prime Minister Diefenbaker hadn’t been reading these authoritative reports, or listening to the informed sources who gave them out. His choices were very different—rather abruptly so. Not a single one of the Duplessis stalwarts was included. Both the new ministers were MPs in the last parliament and thus known to the prime minister personally. There was an indication that more appointments for Quebeckers might be expected, but none at all to show who might be chosen. Apparently that will depend on the member's record of service in Ottawa, when he achieves one.

Of the Quebec ministers already in the cabinet, Solicitor-General Leon Balcer comes from Three Rivers, Duplessis’ home town, but has made rather a point of keeping clear of Union Nationale connections. (I made a misstatement about Balcer in a column a few months ago when I said he was a nephew of Duplessis. Balcer is often called "nephew,” in family-minded Three Rivers, because his father’s cousin married the premier's sister.)

The other French-speaking minister in the old cabinet is Paul Comtois, minister of mines and technical surveys. He used to be an official of the Quebec Farm Credit Bureau, a post within the gift of Premier Duplessis, and he is generally regarded in Ottawa as a Duplessis man. However, the same informed sources who link him with Duplessis also add that he has never

yet succeeded in getting anything done that Duplessis wanted.

“He has tried many times,” one Quebecker said, “but not once has he got what he asked.”

Whether this be true or not (and only Comtois and the prime minister would know for certain) something seems to be annoying some of the new Quebec MPs. They have made no direct complaints in public, but their speeches have an acidulous note most unusual in parliamentary freshmen. After a few opening rounds of fulsome but rather perfunctory congratulation, they launch into a list of demands that sound amazingly like opposition speeches. This is particularly true of MPs from the textile towns of Quebec, who took the first opportunity to lay down a tenpoint program of tariff protection that they want the government to enact as soon as possible. It includes “complete revision of tariff rates,” abolition of preferential tariffs "for the Indies,” a new definition of “dumping” to include “the total cost of production, plus a reasonable margin.”

In that speech by Yvon Dupuis that I mentioned at the outset, he drew the first protest from a French-speaking Conservative when he offered rather pointed congratulations to the deputy speaker, Col. Sevigny.

“I'm very happy at the mode of procedure of Mr. Speaker,” Dupuis said. "As my hon. friend well knows, I sat for four years in opposition in the Quebec legislative assembly, where the speaker is quite different from the one we find here.”

Up jumped L. J. Pigeon of JolietteL’Assomption-Montcalm, who sits in the last row of the southeast corner of the House: "Mr. Speaker, in my opinion those words are unparliamentary.”

Mr. Speaker said nothing. Dupuis said he didn’t see why the word "different” should be unparliamentary, and the incident ended there. But, in fact, some of the newcomers appear to be finding Ottawa “different” in more ways than one.

Said an English-speaking MP who knows Quebec well: “I’m sure some of these chaps are getting a real shock. They’re finding that a member of parliament can’t pick up the phone and tell the deputy minister who's going to get what contract in his constituency. They're finding that they haven’t any patronage to dispense, or as little as makes no difference. This is not what they expected.”

If some reports are to be believed, the result may be serious for the Union Nationale. The U.N. was a coalition of Conservatives and rebel Liberals when it began, nearly twenty-five years ago, and ever since it has had support or at least collaboration from some people in both parties. Now for the first time the Liberals are turning all their strength, what there is left of it, against Duplessis and all his works. On the evidence of the record so far, the Conservatives intend to give him no more backing than the federal Liberals did in the past. Add a historical factor, the tendency of Quebec to keep political balance by supporting one party in Ottawa and the other in Quebec City, and you get a rather startling conclusion: just possibly, Duplessis maybe riding for a fall at the next provincial election.

If that should be the effect of a Conservative regime in Ottawa, e'en the ranks of Tuscany could scarce forbear to cheer, it 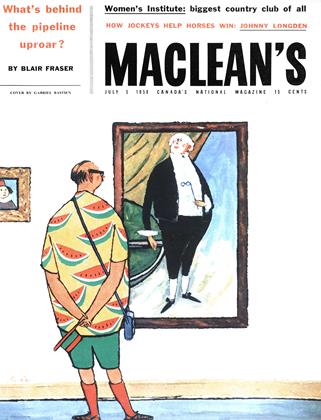