I am surprised that Maclean's would print such drivel as Patricia Clarke’s Stop Pitying the Underworked Housewife (July 19). Any clear-thinking person knows it isn't work an average woman complains about, it is the 24 hours. 7 days a week she has to spend with her work all around her . . .—

* Presumably Mrs. Clarke's statistics are correct about four out of five husbands doing housework. When do these modern Paul Bunyans do any building or reconstruction around the house? And don’t any of her housewives do

I have just eaten my lunch, had my iced coffee on my suncot and wiped away my tears of laughter after reading Patricia Clarke. It is the most delightful and true article 1 have read in ages. -MRS. w. A. now, VANCOUVER.

^ Let's face it: we are not unappreciated, underpaid, overworked slaves, nor are we coffee-drinking, napping, gadgetpushing women of leisure. We have a job to do, like all other workers in our society, and because it is a 7-day, 14hour occupation we earn periodic moments of relaxation when we can get ihem.—LOUISE SLEMIN, TORONTO.

^ . . . We don’t expect all men to enjoy being, say, plumbers, yet modern society expects women to “love that housework” or be marked down as a misfit and malcontent. The age of female emancipation died with the servant dass.-MRS. J. M. RINEBERG, ST. BONI-

I hope the letters are pouring in! . . . to thank Kenneth Forbes for expressing the true nature of today's popular art. this ugly, vague and jarring stuff that has for years bewildered those who once revered the old masters. Perhaps the tide can yet be TURNED.-MRS. D. M.

Letters pouring in on Forbes’ Argument, Don’t Fall for the Modern Art Hoax (July 5), are running five to two in Forbes’ favor.

We should have damned Edison and stuck to candles, spurned Ford and rode horses, blocked social evolution and kept slaves — and, by the way, exiled the ingenuity of Eastman-Kodak

—so Mr. Forbes could produce portraits of politicians and magnates unhindered . . .—FELIX I t KAUZ, TORONTO.

Is it bushy or bearskin?

A letter in July 19 Mailbag says that Guardsmen wear busbies. Oh no. sir. The public may give these titfers the name busby, but Guardsmen wear bearskins, and nothing but bearskins. Busbies arc the smaller hat with small plume and pancake-like flap worn by such units as the Royal Horse Artillery.

^ In the Scots Guards, the pipers wear the feathered bonnet and kilt, and the drummers wear the busby and trews . . .

When I saw Wayne and Shuster’s name on Maclean's cover (July 19) I wasted no time reading it. I'm pleased as punch that the Americans appreciate them but I hope we don’t lose them as we have lost so many of our talented artists.— MRS. B. TRACHTENBERG, MONTREAL.

* When I first heard they were going south 1 pleaded. I said, “Wayne and

^ In Barbara Moon’s article on Wayne and Shuster Sylvia Lennick says “I’ve been in this business in Toronto for years and nobody ever heard of me .

I would like to tell Miss Lennick that I, and I'm sure many others, have enjoyed her and certainly know her.— GISELE MAUEL, SASKATOON.

Is peeling potatoes hateful (Preview, June 21)? Yes, and wasteful too. The food value of a potato is right under the skin. When potatoes are pared the best part of the potato is wasted. Baked potatoes are tastier and more nutritious.— MRS. EUNICE GILBERT, HANTS CO., N.S.

/^Mystery of medicine i^Mayor with a song

Hugh Garner's Why I .Hate Doctors (July 5) was hilarious! Let us have more of his gay witty articles . . .-MRS. VF.RA D.

^ Garner's article was the most disgusting I have ever read. He must have been drinking his "cheap rye whisky” while writing this story. If he doesn't like doctors why doesn't he stay away from them? —MISS M. BEATTIE, EDMONTON.

cle on our civilized version of witch doctors that has ever been published. As a group, they ignore the fact that the compounding of libations and ministrations of a doctor are no longer profound mysteries. The average intelligent person possesses a good general grounding in medicine . . .-FRFD V. DALY, OTTAWA.

Under the heading London’s High Life (Preview. July 5) you say this year’s prices are up by 25%. I bis is wrong. The cost of a vacation in Britain this year has not risen more than about 5%-7!/2% and. depending on the type of vacation, the increase over last year can well be less than this. A world-famous de luxe London hotel can cost $15 a day but. for less than half this price, a wide range of

first-class accommodation is available. In the country, $3-$4 will buy overnight accommodation and breakfast at literally hundreds of comfortable inns. Average meal in London would be $7.50 for two in first-class restaurants . . . The statement that London taxis are no longer “cheap" hardly agrees with the fact that 35c covers a mile ride . . .-A. MCLEAN,

In Blair Fraser’s Backstage in Politics (June 21) I was compared to Elvis Presley. I rushed out and bought a guitar. To

date, I can play two chords, but on listening to the present popular music I feel that two chords will suffice, and I will be ready to accept engagements when my sideburns grow. I am enclosing a picture of myself and guitar and 1 would appreciate any help in obtaining bookings. My

entire salary as mayor is donated to the Industrial Development Committee of the Chamber of Commerce. Any funds obtained through my singing efforts would be donated to the same worthycause to provide jobs for unemployed coal miners of DRUMHELLCR.-L. A. IOSII-

“The man who lost”

In Maclean’s (T he Pipeline Uproar, July 5) I was mentioned under a heading. The Man Who Lost . . the late Faison Dixon went into the fight a well-to-do citizen, came out of it relatively pooi anil died soon afterward, a broken man")

I am not dead yet and am still active in my profession. I have written reports on gas reserves for some of the largest gaspipeline companies ... 1 ant now as wellto-do as I ever was . . I enjoyed reading Blair Fraser's article until I came to the part that mentioned me . . .--A. FAISON

Maclean’s apologizes for an unpardonable error.

Dr. James Thomson’s Argument, Camada Should Ban the A-Bomb (June 21). makes sense, and what he says is in the really Christian tradition. Organized Christianity has, in the past, usually gone along with war. .1. S. Woodsworth was forced to leave the church during World War I for refusing to go along with the warlike spirit, lí the churches will now throw their weight against the fatal drift toward war, they might redeem their mistakes of the past and, what is more important, save the world from catastrophe. 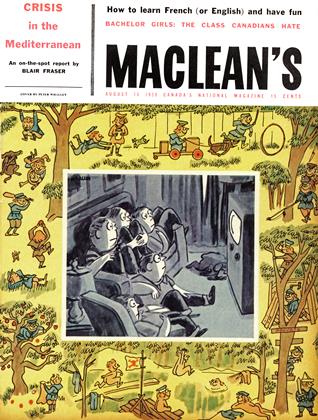