Once a year the Borough of Southgate, which I have represented in parliament for twenty-three years, holds an official civic Sabbath service in a selected local church,

The mace bearer in gown and cocked hat leads the procession. followed by the newly elected mayor, then by his predecessor who

has stepped down to deputy may-

or. after whom comes the lord lieutenant of the county followed by the member of parliament, and finally by the aldermen and the councilors together with the town clerk and the borough surveyor.

The mayors, like the years, come and go. Yet for the rest of their lives they remember that glorious year of office, when each of them in turn was the first citizen of the borough. They give their services without financial renumeration, and only a tiny expense account, but in that golden year they become part of Southgate’s story for all time.

This lovely borough of beauti-

have now become museums and galleries and libraries. Technically If Southgate is known as a dormi-

the men travel by underground or f! car to the City for their work, and

| come back to sleep in Southgate.

The spirit of Southgate

| Then is my constituency just a

suburb lost in the gigantic community called Greater London? || The answer is — not at all! Southf| gate is as individualistic as Quebec or Toronto. Take for example that I Sunday in the Hitler war when

the Germans, who had occupied France, decided to hold a victory || demonstration in Paris at the Arc de Triomphe in the presence of French crowds. Everything was || arranged to show that the Nazis If were conquerors but friends, providing that France was willing to bow to the German yoke.

The ceremony was to be at noon but at eleven a young RAF pilot from Southgate had an idea. With

or without permission he took ofl ip

in a fighter plane, roared across j§j

the Channel, then swooping over f| the Champs Elysées he dropped a || French Tricolor at the base ot the Arc de Triomphe, to the fury and ¡¡ dismay of the assembled Germans. f| To the French with their sense of drama and history it was an |f incident that helped to light the llame of resistance at a moment when defeat and disaster seemed almost to have broken the nation's ff spirit. |

church service? The answer is that || my constituency has its own way of doing things and, therefore, this pi year it broke with tradition and p

elected a woman to be its mayor *§ for the coming year. Perhaps 1 ff

should explain that there is no electoral contest for the mayoralty.

The choice is made by members || of the local council.

Part of the significance of the If election of Alderman Mrs. Ruth Winston to the rank of the first citizen of the borough lies in the || fact that she is the daughter of the 4 local rabbi, Thus the Borough of Southgate, w'hich has had a Canadian representing it in parliament for twenty-three years, now chooses a widow, the daughter of a rabbi, to be its first citizen for the ensuing year.

So there came this year’s civic Sunday. As the dedication was to be held in the synagogue we were duly warned that we had to keep our heads covered throughout the service.

And what a service it was! Here at the side of the chancel was a male quintet w'hose voices rang out as it it were the triumphant march from Aida. The first tenor had a voice of operatic quality that shook the roof when he let loose the full volume of his high notes. So to the climax of the service when the mayoress kneeled before her rabbi father and received his blessing and advice on her appointment.

Look ahead with pride but look back in anger. It was not so long ago when the infamous Hitler sent hundreds of thousands of Jews to death in the horror ovens. Intolerance and besotted vanity had turned him into such a fiend incarnate that he knew neither justice nor mercy.

Then look at Southgate on that sunstrewn Sabbath where the people chose a woman, a Jew, to be the first citizen of the borough, to take precedence over all others, including the member of parliament.

Am I perhaps attributing too much

individuality to this North London borough? With due respect I think not. These Middlesex county boroughs, although they are part of the area known as Greater London, are as individualistic as villages or towns far removed from a metropolis. Take for example Southgate’s amateur dramatic societies as well as its choral societies. I am the presi-

dent of nearly all of them and when they put on a play at Church House (which has an admirable stage) I try if at all possible to attend the Friday night performance (it is usually a three-night presentation) and when the play is over I go on the stage and give them a critical appreciation which is nearly always favorable. In fact what with choral societies, operatic societies and dramatic societies my Friday nights are usually spent in attending as the patron or president.

“On that Sabbath Southgate chose a woman, a Jew, to be the first

citizen of the borough”

Southgate, especially in the case of the younger generation, is not content to gaze transfixed at the narrow screen of the television set. Nor are my constituents content to put on plays that have had a run in the professional West End. They write their own revues and thus spend their winter evenings rehearsing, flirting, and generally enjoying life.

But politically the young Conservatives are very serious and very active. If there is a parliamentary by-election in any part of the Home Counties my youngsters set off to the scene of the struggle where they canvass from door to door and proclaim the cause of the Conservative Party. Not for them the dull mediocrity of socialism with its regimentation. These Tory youngsters know that freedom can never be taken for granted but must be fought for in every generation. Therefore they issue their own pamphlets, canvass from door to door, permeate the sports clubs and preach the gospel of

Churchill. Macmillan and imperial democracy in season and out.

Yet in every community, no matter how pleasant and happy on the surface, there are the sick, the lonely, and the poor. Therefore in Southgate, as in other boroughs, the women’s volunteer services cook meals at their headquarters, and organize distribution to the sad little homes where lonely and forgotten men and women are bedridden and almost helpless.

But if Southgate has its beauty spots and more than its share of kindly folk it also has proud and tragic memories. Five times Hitler’s V2 bombs struck cruelly at the borough. There was no warning — there could be no warning. One moment the pleasant villas would be blinking in the sun and in another moment death and destruction were at hand, while the ghostly wail of the V2. left behind by the super-speed of the rocket, arrived to give new horror to the scene.

Nor was Southgate spared by the Vis which flew pilotless and without any accuracy of aim, until the control clock cut off the engine and sent the plane and its bomb crashing on house tops or in the open streets.

But today the scars have gone, and the queen of boroughs has no warfare except when some cricket team invades our pitch and learns too late that it must go down to defeat. If. of course, the invaders win. then Southgate gives them

a cup of tea and swears that next year she will take revenge.

I began this London Letter with civic sabbath at the Southgate synagogue. Let me end with an incident that occurred twenty-four years ago when the Conservative Association had to choose between Duncan Sandys and myself as Southgate’s Tory candidate for the next election.

After various questions, friendly, semifriendly and critical, a member of the association asked if, despite my name, I was not a Jew. On the wall there was a striking portrait of Benjamin Disraeli, the great 19th-century Conservative prime minister.

Pointing to the portrait I said: “You ask whether I am of the same race as Benjamin Disraeli. The answer is 'No'

although 1 would be proud if it were 'Yes’!” All of which was loudly applauded and the chairman hurriedly called for the next question.

Thus ends my story of Southgate, the queen of boroughs. Come over and see it some time. We are always glad to hear about the rough pioneer life in Rosedale, Westmount or Shaughnessy Heights. ★ 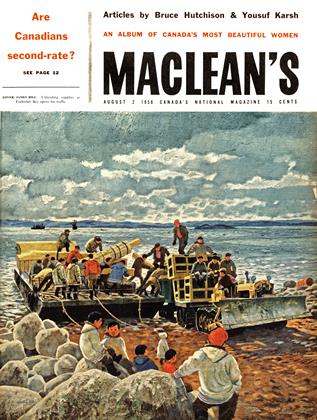