Tin; MOST RIDICULOUS EPISODE of Princess Margarets visit could also—if we choose to take the obvious lesson from it prove to he the most rewarding. We refer to the Case of the Deodorized Don.

The Don is a river in Toronto. It. as many people ardently believe, rivers are living things with faults and virtues anti personalities of their own, the Don has been both the hero and the victim of one of the most affecting tragicomedies of our time.

The Don, not to put too fine an edge upon it, is a veritable crumb-bum among rivers. Where more lavored rivers leap and race between their banks ot grass and gleaming stone, the Don barely waddles past steaming stretches of old tin cans, beer bottles, dozing frogs and mud. Other rivers sing; the Don belches. Other rivers emit splendid fragrances; the Don merely smells.

All ol this was ordained many scores ol years ago. Then the Don was still cool and clean and lull of promise. Then a great city began to grow around it. Then the Don fell prey to the universal New World habit ot treating the gifts of nature as a combination of public nuisance and public convenience: things to be used, soiled, fouled, uprooted and destroyed wherever the doing of such a deed will earn any individual, business or municipality a dollar's profit, save a dollar’s expense or postpone an hour s trouble. The Don became a floating garbage dump. Prudent Torontonians tried to avoid it and forget it.

But suddenly the Don could neither be avoided nor forgotten. Under the plans for the Princess' brief visit to Toronto, Her Royal Highness was to spend the night in a private railway car and the car was to be parked on a siding right beside the Don.

With the disclosure, the whole city turned on the hapless Don as on an abandoned criminal. Editorial writers deplored. Citizens protested. Aldermen keened. Panicstricken. the City Hall decided to “clean up" the river. Patriotic members of the civil service rushed at it with hoses, buckets, pails and dippers, with shovels, rakes and barrows, hauled scum from its surface by the ton and the vat. covered its banks with fumigating salts and pumped deodorants into its sluggish, opaque depths. A bridge much favored by the city's vvinos and rubby-dubs as a place where they can count on privacy was quickly painted and a red carpet put across it.

And so. having been scrubbed, manicured, pomaded, disinfected and decontaminated to within an inch ot its life, this Pap Finn, this Bathless (noggins ot a river had its hour of doubtful glory: met the Princess and then went back to being its unloved, unwashed self again.

There, no doubt, the pathetic episode has ended. But it need not end there if Canada's cities—Toronto being only one among them are still capable of realizing and admitting what a vile mess they have made, by and large, with their many lakes and rivers. Almost every one of our major urban settlements grew beside or around fresh water; almost every one proceeded with the utmost haste to turn its own stretch of waterand often many miles of water downstream or downshore into a noisome trough for sewage and other waste. Still more damaging, the priceless bush and forest cover on which the health of all bodies of fresh water ultimately depends has been ruthlessly rooted up beside the mainstreams and feeder streams alike. In some cases, and the Don may well be one of them, it is perhaps already too late for reclamation and repair. But the job must be undertaken and pressed forward without remission or delay—not as a foolish, temporary and vaguely insulting "courtesy" to a distinguished visitor, but as a genuine act of public conscience. If it only reminds us of this, the humiliating ordeal of the River Don will not have been endured in vain. 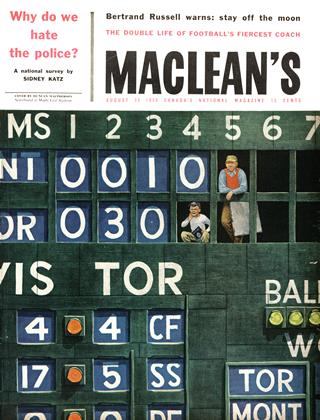