Seven years on the Klondike September 13 1958

We publish above a rare old photograph of Mr. Pierre Berton taken during his halycon days in the Klondike.

The fact that Berton spent his formative years within rifle shot of Bonanza Creek, where George Carmack made the famous discovery described in the story beginning on page 13, has something to do with the articles we're publishing about the great international gold rush of 1897-98—but not as much as you might think.

“It got me interested in the subject but that’s about all,” Berton tells us. “Once I started digging into it, I began to realize that 1 really didn’t know much more about the Klondike gold rush than a man born in Okotoks.” The only source material that Berton had to start with were the letters and diaries of his father, who was one of the stampeders of '98, but as these generally concerned themselves with the wild flowers found along the route, they weren't really much help.

Berton began to dig into the whole story of the Klondike gold rush about seven years ago and he’s been working pretty persistently on the subject in his spare time since then. The result is the four articles which Maclean's is publishing and a much longer book that McClelland and Stewart will publish this October under the title Klondike!

In those seven years Berton crossed the continent twice, digging up Klondike lore.

He interviewed more than forty surviving sourdoughs who took part in the stampede, including three men who saw Soapy Smith shot to death in Skagway and one who crossed the Chilkoot Pass in 1892 as a small boy.

He read more than one hundred and fifty books, ranging from some yellowing Alaskan tomes, circa 1880, to a rare but lively volume

by the mother-in-law of the famous Swiftwater Bill Gates.

He combed through the files of sixteen old newspapers, in New York, San Francisco. Seattle and Vancouver, including the complete files of the famous gold-rush paper The Klondyke Nugget.

He read 104 magazine articles on the subject going back as early as the Alaska Journal, published at Juneau in 1893, and as far afield as Blackwood's of Edinburgh.

He unearthed the personal papers, letters, and diaries and unpublished manuscripts of about a dozen sourdoughs, and a variety of government documents and publications in Ottawa and Washington, D.C.

It's Berton's opinion that the Klondike stampede is by far the most colorful chapter in Canada’s history and that it “belies the myth that our history is dull.” Yet no Canadian has ever attempted to tell the full story in book form. Indeed, out of all the books he read which dealt with the Klondike phenomenon, or touched on it, “only two really made an effort to tell the story in all its facets: the others dealt only with one aspect.”

The photographs that accompany the articles have an equally interesting history. Some of them, unearthed through an old sourdough in Juneau, have never been published; others came to light only recently and, in some cases, were used in the award-winning National Film Board documentary, City of Gold. Many were taken by Eric A. Hegg, who climbed the passes himself, in 1897, with a sled drawn by six goats.

Author Berton, incidentally, has just terminated a six-year stretch as managing editor of Maclean's in order to give all his time to broadcasting and writing. It seems foolish to wish good luck to so versatile and talented a man, but we do so anyway. 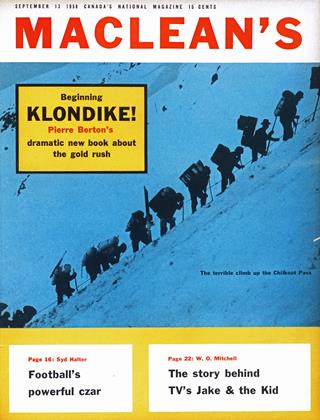