AT OTTAWA WITH BLAIR FRASER September 27 1958

NOTHING IN OTTAWA has been easier to learn than the physical or mechanical facts about the Commonwealth Trade and Economic Conference in Montreal this month. It would bring to the Queen Elizabeth Hotel some 300 guests, not counting reporters—29 ministers, 130 senior officials, about the same number of other ranks. Their offices would take up a whole floor. One wing of the convention floor would be blocked ofT as a “security area” open only to holders of official identity cards. These were being printed in five colors, one for each category from delegate down to messenger. Within the security area would take place all activities' of the conference, including most of the entertainment. Cost of the whole thing was not known precisely, but correspondents were warned that their own expenses would probably run at least S25 a day.

All the answers to this kind of question were short and to the point. Longer but not so clear are the replies to another type of question, such as, "What is the conference about, anyway?” or “What exactly is its main objective?”

A year ago in either London or Ottawa you could get brief blunt answers in private to these questions, too—answers like “Damned if I know” and "None." This attitude has changed. Commonwealth officials now say with every appearance of sincerity that the conference w'ill be a busy and a useful one, although their picture of it is somewhat different from the one presented to Canadian voters last year.

Some people seem to think like the red queen, that it will take all the running delegates can do to stay in the same place. In London a few weeks ago

I asked a British civil servant, “Will your government make it a grievance that Canada has raised the tariff against British woolen textiles?”

“No,” he said, “we have swallowed that. Textiles are always the first target of protectionism, and if it goes no farther we'll accept it and say nothing. But if anything else of that sort happens, you can expect some fur to fly.”

And in fact something has happened,

in the meantime, to rouse concern among British exporters. New amendments to Canada’s customs act give new and wider power to the minister of national revenue to set an arbitrary price, for duty purposes, on any import goods including British. One section of the old act gave the minister a somewhat similar power, but that section makes an explicit exception of British goods— the minister could not tamper with the price of anything that came into Canada under British preference rates. There is no such stipulation in the new section, it can be used against any imports no matter whence they come.

British delegates will certainly want an explanation of the new law, and some assurance that it will not be used likely to restrict a commonwealth trade which, they had been told, it is Canadian policy to encourage. Almost certainly they will get such explanation and assurance. Things like this seldom get into the communiqué of a commonwealth meeting, but they are what is by that well-w'orn phrase, a full and frank exchange of views.

This time there is more occasion than usual for the full and frank exchange, with a new set of ministers playing host to the commonwealth. When 1 asked one man, "What will be changed,

if anything, as a result of the conference?” he replied only half in jest, "The tone of Conservative speeches.”

That alone would be no mean achievement. Most of the government’s indiscretions, the statements that have had to be denied or diluted or explained away, have been on some subject related to trade and economics. Gordon Churchill, minister of trade and commerce, is the most “misquoted” membei of a sadly “misquoted” government. (Churchill has disavowed so many remarks attributed to him that Hazen Argue, CCF house leader, once called him "the minister without foundation”). It takes time even for cabinet members, let alone a couple of hundred back benchers, to realize the reaction abroad to what seemed a simple favor to the voters in a textile riding, or an equally simple expression of quite genuine commonwealth sympathies.

Qf course the asperity will not be all one way. Canada will doubtless have things to say about British discrimination against dollar imports. The British restrictions have lately been relaxed somewhat, but Ottawa is still dissatisfied (as well as disappointed that Britain made the announcement on her own, instead of waiting to make it at the Montreal conference). New Zealand will probably voice misgivings about the tendency of other commonwealth nations to keep out agricultural imports. Indeed, all the countries present will have some pet grievance about other people’s trade policies.

But the real work and the real hope of the conference will have little or nothing to do with trade in the narrow sense. Ever since the Mont Tremblant session last year, when the British stag-

There’ll be entertainment, but a heavy accent on economics too.

gered the Canadians with their offer of reciprocal free trade, official spokesmen on both sides of the Atlantic have been playing down the trade aspects of the Montreal meeting. They lose no opportunity to point out that this is not another Ottawa conference like the one in 1932, that it will not produce a new set of tariff agreements or a new "empire preference” system, that it is a trade and economic conference with a heavy accent on economics.

One of its major concerns will be with the problems of the newer members who are pressing hard for something new in the way of an international development fund. Canada is expected to announce a sharp rise in our contribution to the Colombo Plan for capital assistance to Asia, Africa and the West Indies—fifty percent is the best guess at the size of the increase. But that won't be enough, and it won't be all.

Prime Minister Diefenbaker has already endorsed, and indeed taken some credit for initiating, President Eisenhower's proposal to double the assets and raise the lending powers of the International Development Bank and the International Monetary Fund. The bank and fund annual meeting will be held next month in New Delhi. Preparatory work at the Montreal sessions will be valuable not only to countries like Canada, for whom the new proposal will be quite expensive, but still more to countries like India for whom it means the hope of staving off financial disaster.

To some extent, of course, these things would have been done anyway. Commonwealth members always hold a special get-together of their own, before oi after the bank and fund meeting. Usually it takes place at the British embassy. Present are the same ministers of trade and finance who sit. this time, around the conference tables at the Queen Elizabeth Hotel. They discuss many of the same subjects, and they achieve at least some of the same results with much less fuss and expenditure.

However, there’s a difference between talking about commonwealth problems for two days, and talks about them for two weeks. Every delegation at the Montreal conference has a chance to make a full-dress presentation, and all are expected to take it. Even the cynics concede that a lot more voltage, and a lot more homework, has gone into everybody’s preparation for this meeting than there would have been in an ordinary year.

For Canada, of course, that is an understatement. For Canada the conference is of major importance, a matter of national pride, and it has been taken very seriously indeed. Thinking up things for it to do, contriving ways to make it appear a triumphant success not only to Canadian voters but also to the delegates attending, these have been for many months the main preoccupation of some of the brightest minds in the country.

Some of them at least began in black despair; they couldn't see any way of doing what they now believe they have done. Much of what they have produced is still secret, to be unveiled as the conference proceeds. They don't pretend that it adds up to one coherent comprehensive program, still less do they pretend it is sensational. But they do say it’s all useful, and that Canada will not be ashamed of a conference that was, at the outset, a pretty vacant political gesture. ★ 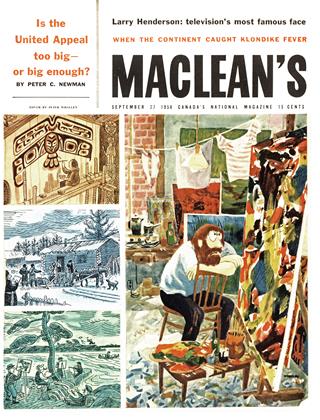