THE HORSE’S MOUTH: The resourceful Alec Guinness is script-writer as well as star actor in a British filming of

Joyce Cary’s novel about an eccentric artist who prefers feet to faces. The style is at times too farcical under Ronald Neame’s direction but much of it is gorgeously funny. With Kay Walsh, Robert Coote.

I WANT TO LIVE: Susan Hayward gives one of her stagey but jolting performances in a true-life role as a tough young woman who dies in the California gas chamber—after many agonizing delays and false hopes—for a murder of which she may have been innocent. Rating: good.

I WAS MONTY’S DOUBLE: Clifton James, an English actor who hoaxed the Germans by impersonating General Montgomery just before the Allied invasion of Europe, does it again in this brisk, funny and entertaining British thriller. With John Mills, Cecil Parker.

ROCKETS GALORE: A sort of belated sequel to Tight Little Island, with many of the same diverting Scots. This time they are involved in a massive campaign to save their tiny homeland from being turned into a testing base for atomic missiles. It’s a bleak topic for comedy but the results are enjoyable.

THE ROOTS OF HEAVEN: Well worth seeing, but somewhat disappointing nonetheless, this is ace director John Huston’s screen version of Romain Gary’s famed novel. It’s about a fanatical idealist (Trevor Howard) who tries to stop the slaughtering of elephants in Africa and is unwittingly “used” by various cynical opportunists. With Orson Welles, Errol Flynn, Eddie Albert, Juliette Greco.

TOM THUMB: A celebrated fairy-tale by the Brothers Grimm has been turned into a movie that should delight most youngsters without unduly boring their elders. Russ Tamblyn is the miniature hero; Bernard Miles and Jessie Matthews are his honest parents, and Terry-Thomas and Peter Sellers are a grand team of teeth-gnashing villains. With Alan Young, June Thorburn.

CILMOUR’S GUIDE TO THE CURRENT CROP

In Love and War: Drama. Poor.

A Nice Little Bank That Should Be Robbed: Crime farce. Poor.

Nor the Moon by Night: Melodrama in African jungle. Fair. 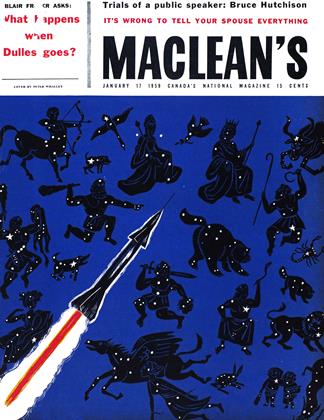