FOR ONE WEEK (Dec. 1-8) the mayors of twin cities Fort William and Port Arthur were women. Mrs. Catherine Seppala and Mrs. Eunice Wishart, until Eunice retired after three terms "to give the men a chance." At the same time, Mrs Jean Newman topped the polls to win a Board of Control seat in Toronto and said she'd probably run for mayor next term. Ottawas ex-mayor Charlotte Whitton says she expects to run next term too. Mayors of three other Ontario cities are women. In Canada, women now' occupy more than 1.000 elected positions.

Are they taking over the country9 Not exactly. In Ottawa there are only live women senators and three MPs. But when they choose to run—mostly in municipal closeto-thc-hearth elections — there’s a

suspicion they have men beat all hollow as vote catchers Two years ago bachelor Winnipeg school trustee George Frith told electors: looks to me as if women are trying to take over. It would be a major mistake.” This year, stillnettled women took over a third of the seats on School Board. Stratford had never had a woman on city council; few' had run. This year three were elected;

MP Ellen Fairclough predicts that the number of women politicians in Canada will double in 10 years. But there are signs, notably in Quebec and the Maritimes, that outside of keeping an eye on schools women aren't anxious to compete with men in politics.

their terms." says Mrs. Olive Urquhart, mayor of Pointe Claire, Que. "It's the husbands’ fault. They don't encourage their wives." There are 10 men for every woman running for office.

But don't ever count on women staying in the back seat, especially if they get riled. Senator Muriel Ferguson needles them ("Housewives who spend all their time at home are dead wood") and some react. Take Effie Jones, the only woman to run for mayor of Vancouver (1947-48). She got mad about rising streetcar fares. From a standing start, “Low-Fare" Jones, as newspapers dubbed her. fell only 5,000 votes short of winning.

Backstage WITH THE KING BIOGRAPHY / A true or false picture?

HOW FAITHFUL to the original is the image of Mackenzie King presented by his official biographer, R. MacGregor Dawson? This question is causing just about as sharp a division of opinion as some of the political issues of Kings cárcel. Maclean's asked several other biographers and historians familiar with King and his times to comment. Most said the Dawson biography was a fair and honest picture. Two said flatly it was not. Here are their opinions:

Prof. A. R. M. Lower, author of Colony to Nation and Canadians in the Making: ", . . It gives a picture of a public man unrivaled in intimacy ... a portrait of a complex, fallible man ol the highest ideals and most intense personal ambitions. The author . .

does not shrink from pointing out the weaknesses as well as the points of strength.”

Bruce Hutchison, author of l he Incredible Canadian, a King biography: "It is quiet and unpretentious and gives us our first doct> mentary evidence on that Canadian prodigy and riddle. Extracts from the diary do not alter but rather confirm the image of King which the public has long ago formed for itself.”

Prof. Bernard Ostry, co-author of The Age of Mackenzie King, am other biography notably uncomplimentary to the subject: "I find this disappointing . . . excessively

long, incredibly dull and, while sincere, totally lacking in candor . . Even I must admit that Mackenzie King deserves better than this dreary tranquilizer, unrelieved by any sense of humor or the introduction of especially new material. It would be unfortunate if Prof. Dawson were to live in memory as the author of this tedious, if industrious, apol ogy rather than for his more serious w'orks.”

Prof. H. S. Ferns, also co-author of The Age of Mackenzie King, writing in a review in the Toronto Globe and Mail: "The work of a Liberal party apologist . . .

Only a preference for mush prevented Prof. Dawson from depicting the Liberal leader in terms of intelligence . . instead of in

Prof. William Kilhourn (The Firebrand. a biography of William Lyon Mackenzie): “This is no

weird grey eminence but the portrait of a brilliant young idealist, burning with family pride and personal ambition. It is a revelation of the Puritan mind in action the struggles of eonsicence, the reading of God s hand in each event, the sense of being Chosen for some great destiny."

Ernest Watkins, lawyer who is pre paring a biography of King's arch foe. R. B Bennett: “A revealing and quite true picture. He was astute as a monkey. I recall how he viciously attacked Bennett over the appointment of Herridge to Washington. It was the obvious thing to do. Herridge was Bennett's brother-in-law I have come across nothing in the Bennett papers at variance with the picture given here "-JOHN CLARE

with the Mounties’ Musical Ride

Now it’s the top Canadian show on the road. Meet the troop that’s “Canada’’ to millions

WHEN VARIETY, the trade paper of show business, recently reported a "WHAMMO SHOW BN CANADIANS” in the San Francisco Cow Palace, its Canadian readers must have realized with a shock that they’d never thought of the RCMP that way—as one of the biggest, most colorful acts of the century.

To more than half a million Canadians and Amen cans who watched the Mounties Musical Ride in 123 formal performances this year, however, the act was never better. The 39 men and 36 horses in the troop traveled 12,000 miles to most of the continent’s top fairs—15 in Canada and half a dozen in the U. S. In San Francisco, they attracted 173,687 people in a week, 20.000 more than Arthur Godfrey and Goldie did last year.

It was the longest as well as the most glittering

season for the Musical Ride, which was on the road from June 29 to Nov. 15. Horses and men traveled by train under Inspector Norman Jones, a mustached ramrod of a man who has trained riders since 1939 Who puts the show on the road? The RCMP provides men and horses, paying only the mens salaries. Shows and fairs they visit pay traveling and billeting expenses and loot the bill for care ol the hot scs. F.x elusive of traveling, it runs to $750 a day.

The federal government for the first time this year sent a travel-bureau agent with them on the U. S tour to distribute "Come to Canada’ pamphlets. Questions most people asked about the Mounties. - How can 1 join?” Answer: “You cant unless you're a British subject.

> 'Where's Sergeant Preston?” Answer: “Nowhere but on I V.

o' Where do you buy your horses?” Answer: "Mounties raise and train them at their Fort Walsh, Sask.. ranch.” Constables train for three months for the ride, then go on to other duties after one tour.

-How do horses keep time to the music?” Answer: -They don't. The music keeps time to the horses. RCMP takes along its own music director. Sgt. BRYSON.-PETER C. NEWMAN 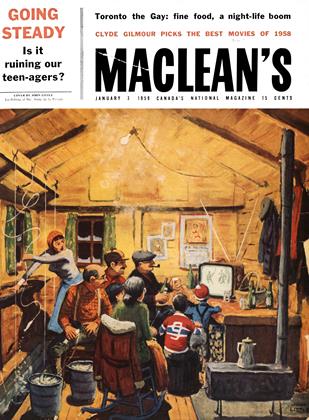