Click to View Article Pages
My most memorable meal: No. 45

The meal I remember best wasn't a meal at all. It was a descent into the valley of humiliation, a discovery of the abysses of human snobbishness, a sore trial—but a meal it definitely was not, unless eating humble pie constitutes one. In my hurry, you see, I had stumbled into a restaurant that catered only to the well-heeled. There was nothing on the ordinary plate-glass window, the unostentatious door, to let a fellow know he was standing on the outskirts of a domain where stomachs were coddled with pâtés, lobster salads, and choicest wines.

I entered and took my seat at an empty table and began drumming on the innocent-looking tablecloth. Presently the waitress came and handed me a menu. The prices for a meal ranged from two seventyfive to fifteen dollars, and all 1 had in my pocket, grown suddenly clammy and ill-ventilated, was eighty-five cents. Then my distressed eye noticed the chopped liver, which could be ordered à la carte.

“I ll take that," I said, pointing casually. She inclined her head statuesquely. “Yes,” and waited, pencil on pad. "That’s all, just the chopped liver.”

She stared at me and as the horrible truth broke in upon her. waves of boredom, pity, and contempt washed across her face. She removed the menu from my falter-

ing hand as if she feared contagion. While she was gone, 1 had the chance to observe the other diners at the tables next to mine. Their teeth and lips were closing happily over their morsels of thick plutocratic steak, the succulent gravy on their plates making brown pools of composure.

As if to humiliate me, the waitress brought me my order in a dish shaped like half a pigeon shell and no bigger. I remember feeling as crushed and wrinkled as the liver and identifying myself with the thin strips of onion, black and limp with humiliation. Things suddenly began to go bang bang in my head, and 1 had a vision of the crisped wings of the massacred fowls ringing up the figures of the cash register in a crazy delirium.

1 swallowed the liver in tw'o swift bites, but the waitress kept her back toward me. I could not ask for my check without raising my voice, and this I could not do. When she finally came she handed me the bill as coolly as before and cleared away the inoffensive dish so that no tip of mine would sully it. This was the most crushing blow of all.

I staggered to my feet. How they carried me past the hilarious diners —I was sure they had marked the whole thing from beginning to end —and past the supercilious cashier, I shall never find out.

MONTREAL’S IRVING LAYTON IS A PROLIFIC POET AND EDUCATOR. 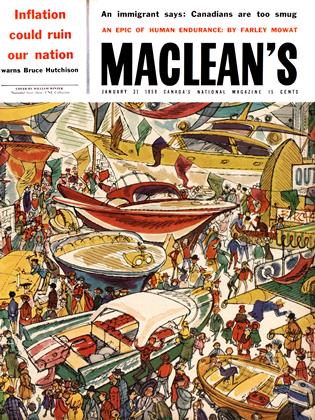