Forty minutes from London our plane touched ground at Le Touquet. The strip of water which was the guard and shield of Britain for so many centuries has shrunk in terms of time to nothing larger than Toronto Bay.

It is no credit to me that on such excursions I leave all arrangements to my wife. Except in appearance and sex I might be a particularly dumb blonde traveling with my protector. Nor in our travels about the world has she ever failed me.

Believe it or not but when Madame presented my passport at Le Touquet the eagle eye of the customs officer detected that it was out of date. In the heart of every Frenchman there burns the spirit of a bureaucrat and this was a particularly juicy morsel because I was a British parliamentarian.

In no time we were surrounded by every available official and their deepest suspicions were roused. How could I be a British parliamentarian when my passport clearly stated that I was a Canadian? Obviously I would be deported in the plane that had brought me to France.

But what about Madame? Here was another Canadian passport although the lady in question did not even pretend that she lived in Canada. Then there was a gasp of

horror. By four days, my wife's passport was out of date! Judging by the excitement it looked like either immediate deportation or the Bastille.

Then my good wife had an idea —there must be a British Consul somewhere? Sure enough they admitted that there was such an official in Lille, a hundred odd miles in the interior. By luck he was in his office when we telephoned and with admirable promptness he spoke to the Le Touquet officials and secured a 24 - hour respite which would allow us to motor to Lille next day where we would pay a considerable amount for our crime plus permission to remain in France for two weeks.

Next morning we set off for Lille. As the miles and miles of countryside sped by we were once more struck by the fact that the soil and the soul of France are closely wedded; one can travel for miles without seeing dwelling places of any sort. Nor were there any signs of life. The harvest had been garnered and the soil was into its long sleep.

We stopped for lunch in a village and entered a small restaurant. At a large table ten young French lads were tucking in preparatory to resuming their walking tour. They all talked at once and their laughter was frequent as they

argued and joked about their experiences. In France there are no laws whatsoever about supplying drinks. If a cafe is open it gives you anything you want, because wine or beer is their natural drink and there is no sense of adventure about it. But in nearly five hundred miles

of motor travel we never saw anyone the worse for drink.

In the course of time we arrived at the unlovely city of Lille, the centre of the French steel industry. There were some parks but one could almost feel the disapproval of the foundries at the waste of ground.

How pleasant it was to climb the stairs and enter the modest offices of the British Consul! He had already prepared the documents which would purge our crime and was very sorry to have to tell us that the attendant expense would be in the

neighborhood of thirteen pounds. Then we had a cup of tea and talked of England and, as befitted the theme, our voices were gentle and quiet.

Then back we went on the long trail to Le Touquet where we dined at outhotel at nine o’clock, the popular hour. After that we went to the Casino and, as it was a Saturday, we had to wear formal evening dress to be admitted. You cannot lose money on a Saturday night unless you dress for it. Somewhat weary from our travels, we went home to bed at one o’clock.

What is more pleasant than a swim in the ocean during the morning, a game of golf in the afternoon, and the casino at night? When a Frenchman and his wife go bathing in the sea they take their whole family and it is a common sight to see a six-year-old being knocked down by breaking surf. The papa or maman shouts advice but they let the youngsters look after themselves. In fact, a French family is a single unit with madame in full charge and papa a rather backward eldest child.

How would you define a gentleman? In England they would define a gentleman as one who went to a public school (which means a private school) with some social background and a bit of land, or an ex-officer who served in the Brigade of Guards. Yet I realized more vividly than ever before that in France they have the basic phraseology of equality whereas the English have the phraseology of inequality.

Take for example these commonplaces of ordinary day-to-day greetings in French and in English. My golf caddy at Le Touquet, a man of fifty years or so. greeted me each day with: “Bonjour, monsieur.” Likewise his wife, if she were caddying for my wife, would say: “Bonjour, madame.” That is the same greeting the rich and the powerful would use with each other.

In English the words “Yes, sir” and “No, sir,” as well as “Yes, madam” or “No, madam,” are based upon class distinction.

For ten days the same Frenchman carried my clubs, and for ten days he was accompanied by his little eight-yearold daughter who was as completely feminine as any creature could be. The course was about three miles long but she always came with us. Sometimes she would take her father’s hand but if I suggested that she should do the same with mine she would get behind her father for protection and look at me with mock fright.

Day after day my admiration of this French caddy grew and expanded. With the true meaning of the word he was at once a man of the people and a great gentleman. Toward the end of our holiday he said that he would not be able to caddy again for me but gave no explanation. So we shook hands while la petite looked suspiciously at me from the security of her father’s back. That was all.

“I'm sorry about that chap,” said the caddy master, who is an Englishman. “They’re operating on him tomorrow and his chances are pretty slim.”

If that is not a word portrait of a gentleman, a great gentleman, then the fault is mine.

Now we are back in a London still talking about President Eisenhower's visit, where the political parties are girding themselves for the general election. Parliament will meet only to announce the dissolution and the election, unless some untoward happening forces a postponement.

I have returned home with a conviction in my soul that France is rising to new heights. Under the stern leadership of President de Gaulle — a difficult but incorruptible man — the greatness of France is re-emerging. I saw it and I felt it wherever we went.

Remember it was the French mob that stormed the Bastille with little more than their hands and their courage and raised the immortal cry: ''Liberté! Egalité!

We went to France for a holiday but we saw a nation rising from the mists of the years. France is herself again. ★ 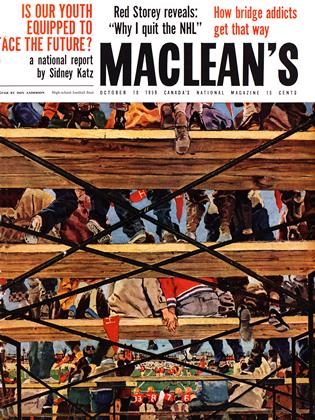