THIRD MAN ON THE MOUNTAIN: A challenging peak in Switzerland variously dominates the lives of a daydreaming dishwasher (James MacArthur), his sweetheart (Janet Munro) and an Alpine old-timer (Laurence Naismith) in this eye-filling adventure produced under Walt Disney's supervision. Michael Rennie portrays a renowned English climber who stimulates the lad’s ambition to become a great mountain guide like his dead father. Some of the acting is self-consciously “quaint” in the manner of turn-of-the-century operettas, but a pleasant story and spectacular Alpine photography make Third Man on the Mountain an agreeable experience.

FERRY TO HONG KONG: Looking and sounding as though he somehow has a tongue in each cheek, apple-faced Orson Welles turns in an unabashed caricature instead of a real characterization in this weird farce-thriller from Britain. His role is that of a fake ferry-skipper who finds himself permanently saddled with an international hobo (Curt Jurgens) on the run between Hong Kong and Macao. Rating: fair.

INSIDE THE MAFIA: Rival gangs of super-hoodlums try to imitate Executive Suite business tycoons for a while but eventually settle all their differences with blazing guns. Virtually nothing is disclosed about the infamous fraternity mentioned in the title. Rating: fair.

THE RABBIT TRAP: Laden with rather heavy symbolism, this is a wellintentioned little drama about a wage slave (Ernest Borgnine) who suddenly must choose between personal scruples and Getting Along at the Office. The outcome is unlikely to amaze the customers.

THE ROOF: Vittorio De Sica, who directed Shoeshine and The Bicycle Thief, has come up with another outstanding Italian film. It tells of the efforts of an impoverished young couple to find a home, no matter how humble, all to themselves.

THEY CAME TO CORDURA: The subtle ironies wrapped up in the true meanings of human courage and cowardice are examined, sometimes a bit too wordily, in a strong action drama starring Gary Cooper. The locale is the Mexican border during the 1916 skirmishes between Uncle Sam’s cavalry and Pancho Villa’s rebels. With Rita Hayworth, Van Heflin, Tab Hunter, Richard Conte.

GILMOLR’S GLIDE TO THE CURRENT CROP

Darby O’Glll and the Little People:

The Five Pennies: Biog-musical. Good. For the First Time: Mario Lanza in

The Heart of a Man: Comedy. Fair.

I.ook Back in Anger: Drama. Good.

Middle of the Night: Drama. Fair.

On the Beach: Atom-survival drama. Good.

Say One for Me: Comedy-drama. Fair. The Scapegoat: Drama. Fair.

The World, the Flesh and the Devil: 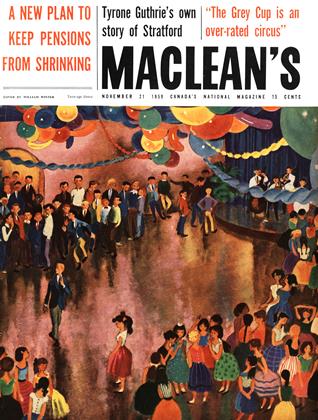