Interest in compact cars will be eclipsed early in the 60s by more revolutionary news: the comeback of the electric auto.

Three manufacturers (including Stinson Aircraft in California) are already making electrics and two (Chrysler and American Motors) are developing others. Equipped with chargers that will plug into ordinary house outlets, their batteries will be more compact and powerful than those of the early 1900s. They'll do 80 to 150 miles on an overnight charge costing the price of a gallon of gas. Speed: up to 50; capacity: two or four passengers: cost: $1,500 to $2,800. Advantages: silent running, low operating cost, no exhaust fumes. Drawback: short range. Likeliest first users: meter readers, whose utility companies will be anxious to use their own product as “fuel.”

“Air” cars — suspended above ground by jets or fans that propel, steer and brake. Ford's present jet model will likely be developed for highways equipped with tracks or

rails providing automatic steering at high speeds (up to 500 mph). Curtiss Wright’s car, riding on a cushion of fan-driven air, will bid for heavy-duty off-highway use — over water and rough terrain.

Gas turbines will be ready for public use, but their makers (Ford. General Motors, Chrysler, Rover) aren't sure if the advantages (smooth operation, low-cost fuel) will catch the public fancy.

Will cars get bigger or smaller? Both. If you don’t want a compact or smaller car you’ll be driving the longest, lowest, widest 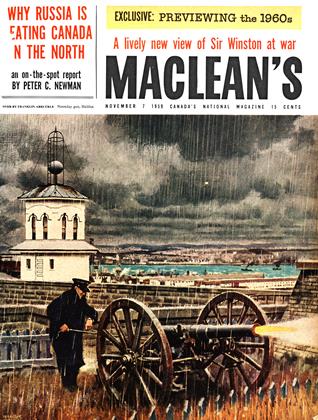