I notice that the lives of all great Canadians have been full of dramatic colorful incidents that pointed the way to the great future that lay ahead of these men. There are many Canadians, however, about

whom could be told anecdotes just as heart-warming, yet who, for one reason or another, have remained unknown. It is in the belief that they arc part of the great cultural heritage of every Cana-

dian, that I have been collecting some of these stories. After months of research and countless interviews, I am now happy to present these seven little-known Canadian legends.

In July, 1913, when Wilfred Mackenzie was still a young man, he was asked, without warning, to address a group of his townspeople gathered for a July I celebration. The result was his famous speech that begins “The twentieth century belongs to Waterville. We are living in Canada’s next great city.” The population of Waterville was at that time 14,238. Today the population of Waterville is 14,238, and Wilfred Mackenzie is still one of its best-loved citizens. Summer tourists love to get him to re-enact his famous Waterville address, which he will do for a beer.

In the year 1923, David Herringer was prospecting a branch of Wolverine Creek, seventy-five miles northeast of Dawson City. After six months of back - breaking labor in search of gold, he was weary, discouraged and running out of supplies. He decided to break camp. "I’m through, you \*CA $#!!!,” he said, taking one last swing of his pick. That one act changed Dave Herringer's life. He hit a plain rock. “You lousy !) (’&%$#!!.” he said and went back to Saskatoon. where he now drives a bus. The only comment he'll make on the thirty years he spent prospecting is, “Some people have all the luck.” He is a very bitter man.

The residents of the drab little town of Foothills, Alberta, took little notice of the tall, awkward, brooding boy who sat by the banks of Sandy Creek, lost in thought. They could not know that Arthur Mann was already living in a world of his own, peopled by the flamboyant, vital, human characters of his great Canadian novel. Arthur Mann's first published work appeared in the Foothills Bugle under the pseudonym “Apollo.” He never sold anything else, and all he got done on his novel was the first line of Chapter One. “Do you know any broads named Edna?” When I spoke to Arthur Mann, he said, “I gave up writing twentyfive years ago. It's too tough.”

For fifty years Toronto's Abe Zimmerman was known only as the newsboy at the corner of King and Yonge. To only one or two of his cronies was it known that Abe had for many years been a favorite of the great Canadian financier, J. Harvey Grundy. When Abe died at eighty-nine, leaving no relatives or kin. his room was entered by the police, who found a chair, a table, a jar of Chiver’s marmalade and a copy of Nugget. Abe Zimmerman’s bank balance was S27.83.

When other boys of Ontario’s Tiny Township were smoking and playing around poolrooms and girls, Homer Lincoln was hard at work at his law books, studying by candlelight until well past midnight, as during the day he had to split rails. “What good will all those books do you, Ho?” his companions would chide. Homer would just smile, for a quiet inner voice had told him that some day he w'ould be prime minister. Today that same Homer runs a tobacco shop on Danforth Avenue in Toronto, where he moved in 1922. “It was the candlelight that finished me,” he says. “I nearly went blind. Anyway, it’s almost impossible to become prime minister.”

Neighbors of the cluttered, brawling, noisy street where little Lise Maxwell grew up still remember her dancing between the peddlers’ carts, a wild, strange little creature. all eyes and dreams. For Lise Maxwell wanted more than anything else in the world to dance. To dance to great audiences. To dance by herself. But to dance. She would sometimes look up at the expensive apartment buildings that were beginning to be built in the area, and say, “Someday, I II live up there.” At that time, Lise was inclined to be rather awkward. Then around the age of thirteen, Lise began to think of boys and from then on thought of nothing else. At eighteen she married a young clerk in a supermarket and now lives in Saint John. N.B. She is now a very awkward dancer. Asked about her early dreams, her usual answer is, “What?”

When Louis Richard was a boy helping in his father's grocery store in St. Pierre, Quebec, he often neglected his work to practice hockey on a patch of ice behind the store, using a broom handle for a hockey stick and a tin can for a puck. Finally, one time when he forgot to deliver an important order, his father sent him packing to Montreal, where he arrived one bitter winter night with SI.78 in his pockets and a dream — a dream of playing for Montreal Canadiens. Louis Richard never forgot what he learned behind his father’s store, and often today instead of lifting a tin can with his spiked stick and putting it in his sack, he will stick-handle it right across Victoria Square where he works as a grounds keeper. “I liked hockey.” he told me when I saw him a week ago. “but I never found out how you get on one of those big teams.” 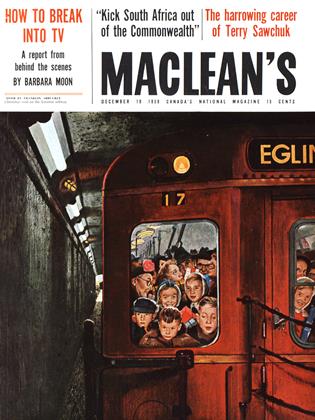