THE LAST ANGRY MAN: Actor Paul Muni, seldom seen on (the screen in recent years, here offers a convincing re-

minder that he is still one of the finest craftsmen in his profession. His role— in a sentimental but often deeply moving film version of Gerald Green's novel—is that of a tough-minded old Jewish doctor in a Brooklyn slum. There is humor as well as drama in his abrasive clashes with TV hucksterism, slick medical specialists and other targets for his invective. David Wayne, Betsy Palmer and Luther Adler are in the skilful cast.

THE BEST OF EVERYTHING: Roña Jaffe’s popular novel about the fiscal and physical struggles of a bunch of Manhattan career girls has been turned into a handsome but shallow movie. Several well-handled scenes fail to atone for the soap-opera glibness of the package as a whole. With Joan Crawford, Hope Lange, Suzy Parker, Stephen Boyd, Diane Baker.

THE BLOODY BROOD: A successful effort to manufacture, in Canada, a piece of competent trash for the international sex-and-violence audience. Made in Toronto by Julian Roffman. it tells of two sadistic psychopaths (Peter Falk of New York, Ronald Hartmann of Toronto) who murder a messenger boy “for kicks” and then try to prevent his brother (Jack Betts) from discovering their guilt. The atmosphere of a “beatnik” hangout in an unidentified North American city is vividly conveyed.

BOBBIKINS: A boy fourteen months old suddenly begins talking like a grownup and ferreting out stock-market tips for his father (Max Bygraves) in this British comic fantasy. The basic idea is promising but the fun dwindles wearily before the finish.

CAREER: This Hollywood drama obviously tries to do a definitive job on the oft-told tale about an ambitious actor (Anthony Franciosa) and his bitter ordeals on the road to fame and fortune; but the characters themselves are uninteresting and the story (based on James Lee's off-Broadway play) sags badly in its latter phases. With Dean Martin, Shirley MacLaine, Carolyn Jones.

THE WONDERFUL COUNTRY: Robert Mitchum’s lethargic but ominous demeanor is ideally suited to his role in this good and unusual western. He appears as an American who has grown up in Mexico and become an unsanitary gunslinger for a Mexican politician (Pedro Armendariz) in the period just after the Civil War. After he kills a man in self-defense he finds both sides of the border too hot for comfort. With Julie London, Gary Merrill.

Darby O’Gill and the Little People:

A Hole in the Head: Comedy. Good. Inside the Matia: Crime drama. Fair.

Look Back In Anger: Drama. Good.

.Middle of the Night: Drama. Fair.

On the Beach: Atom-survival drama. Good.

Say One for Me: Comedy-drama. Fair. The Scapegoat: Drama. Fair.

That Kind of Woman: Drama. Fair. They Came to Cordura: Drama. Good, Third Man on the Mountain: Alpine drama. Good. 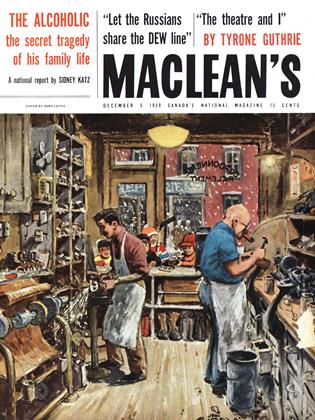