Among many sensible recommendations in the Heeney Report (a report by the Civil Service Commission during A. D). P. Heeney’s chairmanship, suggesting reforms in its own procedure) one in particular catches our eye. It is the section dealing with language qualifications for civil-service jobs:

“The commission recommends that clear provision be made in the new (civil service) Act and regulations to ensure that both English-speaking and French-speaking Canadians are served by civil servants in their own tongue . . .

“Strict application of section 19 of the present Act would make it possible to have civil servants who can speak only French dealing with the public in a locality where forty percent of the population is English-speaking, and vice versa ... It seems to us that, where customers of any government office include both English-speaking anti French-speaking Canadians, the best solution is to have a bilingual staff and not one which fias ‘knowledge and use of the language of the majority.’ ’’

In nine provinces of Canada “the language of the majority” is English, in one of those nine provinces and in sections of several others, at least forty percent of the people own French as their mother tongue. We doubt that there is any place in the entire country where a substantial English-speaking minority finds itself dealing with civil servants who speak no English, but thousands of French Canadians deal in their own locality with civil servants who speak no French.

This is the true, unacknowledged reason why the present Civil Service Act reads the way it does. In practice, ‘‘a bilingual staff” would mean a FrenchCanadian staff. The suggested change would give French-speaking Canadians a great and often decisive advantage in getting employment and promotion in many branches of the civil service where the Englishspeaking now predominate.

When French Canadians complain that they are sparsely represented in the upper echelons of industry, and of many government departments too, we English Canadians smugly reply that it's the fault of their education. Spend less time on your catechism and more on science and mathematics, we tell them, and you too will be qualified for the well-paid civil service jobs that are now a near-monopoly of the English-speaking.

If this argument is valid it should work both ways: it is the fault of our education in English Canada, and the merit of the French, that we can speak only one language and they can speak two. Perhaps they ought to get the benefit of their superiority. Maybe if they did, there would be less neglect of language in English-Canadian schools. 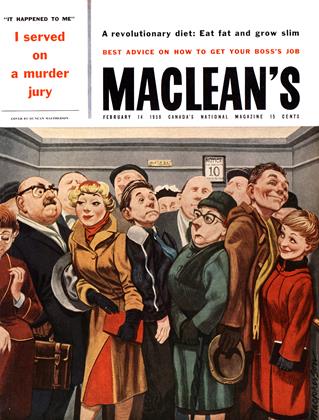