The facts and myths about lobbies BLAIR FRASER February 28 1959

got a hearty round of applause when, speaking of the Avro Arrow, he said: "Lobbies will have no effect on the decision this government makes.” In general, he had found that “the stronger the lobby, the weaker the argument.”

Conservative MPs pounded their desks, and even the opposition nodded approvingly—to all parties “lobby” is a dirty word. A few days later Arthur Smith, the young Conservative who sits for Calgary South, got some favorable notice when he suggested that Canada, like the United States, might well require lobbyists to register as such, and to disclose their principals and their sources of income.

Smith is a relative newcomer to parliament, first elected in June 1957, but even in that brief time he has seen a sharp increase in the amount of lobbying in Ottawa.

“It’s not always recognizable,” he says. “The lobbyist uses the most respectable title he can command—lawyer, or public relations expert, or advertising account executive, or member of the press. 1 happen to know one man who is setting up offices in Ottawa right now. He’s a public relations counsel, but his main function here will be to direct a particular lobby for a particularpressure group. He says it pays a lot better than ordinary PR work.”

The collective noun “lobby.” according to Webster, denotes “persons not members of a legislative body who strive to influence its proceedings by personal agency." As a verb it means “to address or solicit members of a legislative body, in the lobby or elsewhere, with intent to influence legislation.” These works conjure up in the public mind a sinister ligure—a man whose function is to bribe, bully or blarney members of parliament into doing his client's will, and whose professional skill is to know which members arc most amenable to this treatment.

“1 am appalled to discover what businessmen think about the government," said a man who returned to private business not long ago after a distinguished career in the civil service. “They believe the way to get a contract in Ottawa is to know the right person and grease the right palm. 1'hey don't know who this wizard is, but they think I do—after all, look at the years 1 spent in my old department. When l try to tell them he doesn’t exist, they think I'm just holding out on them."

The facts about lobbying in Ottawa are less sensational. If Art Smith's suggestion were adopted, and all lobbyists compelled to register, some unexpected names might turn up on the list.

In all matters relating to temperance, and the use of alcoholic beverages, there is no doubt which is the most powerful lobby—not the Domin-

ion Brewers Association, but the United Church of Canada. On any legislation connected with Indians or Eskimos the Oblate Fathers are a more formidable lobby than, say, the Hudson’s Bay Company. MPs say the best-organized lobby they can remember was put on during the past year by humane societies, like the SPCA, campaigning for a law on humane slaughter by meat packers.

Of course it is the special strength of groups like these that they have no direct material interest in the case or actions they urge. However, this cannot be said about another powerful lobby, perhaps the best of them all— the Canadian Federation of Agriculture. CFA president H. H. Hannam is out to get the best deal he possibly can for the Canadian farmer, and to that end he maintains very close and friendly relations with the federal Department of Agriculture. The same attempt is made in the appropriate places, though rather less successfully, by the Canadian Labor Congress, the Canadian Manufacturers’ Association, the Canadian Chamber of Commerce, indeed by most of the thirty-odd national associations to be found in the yellow pages of the Ottawa telephone book, and by many others like them in Toronto and Montreal.

Among the hundred and fifty lawyers practicing in Ottawa, probably more than half do a certain amount of “parliamentary work," as they call it. A fewr firms do almost nothing else. “Par-

liamentary work” is quite different from the ordinary practice of law, and in fact is done by many people who are not lawyers at all. It really consists of guidance, through the jungles of bureaucracy and politics, to the right man who knows what the client wants to know or can do what he wants to have done.

There is nothing terribly sinister about this. Industrial counselors here can earn good fees from satisfied clients merely by knowing their way around the government service. They can often get results in a matter of hours, by going directly to the right man, for which an uninstructed client might labor for days.

It would be idle to deny, though, that good connections make a difference. When the Liberals were in power, a great deal of “parliamentary work” went to lawyers who were prominent in the National Liberal Federation. Nowadays these men get markedly less, and their Progressive Conservative colleagues get markedly more. What they provide is not so much a service as an entrée.

Once, about twelve years ago when the rush of immigration from Europe was still new, a friend of mine asked if I could find out what was delaying the admission of an elderly relative. I telephoned to the deputy minister of immigration, explained that this was a personal enquiry, asked if he could find out without too much trouble just where this particular case stood. He called back before long to say there was

no impediment, just the rush of work, and that the visa would come through in due course.

In fact it came through within a few days. A long time afterward I found out why. The deputy hadn’t asked for any favor, but the mere fact that he had sent for this particular file was enough to promote it to the top of the heap. And the friend who told me this also told me that an out-of-town lawyer, who happened to be a member of the senate, charged a fairly handsome fee for exactly the same “service.”

This is not lobbying in any of the dictionary meanings of the word, but it gives an idea of the sort of thing a lobbyist can do. For any person or delegation seeking to put a case to the government, a friendly introduction is a help.

Many of these delegations are welcome, sponsored or not, for what they have to say is useful to the government. For three months before every budget, the minister of finance and his senior officials spend a large part of their working day receiving delegations on tax matters. Often the same delegations turn up year after year, with technical problems of corporate taxation. The good ones never waste time trying to get special favors, or press unreasonable demands; they concentrate on suggesting how the tax law can be improved, and their counsel is highly valued.

There are always others, not so wise, whose hope is to put something over. Perhaps, from time to time, some of them succeed — but ministers very quickly become experts, and cynics, in detecting the man with the axe to grind.

If what the lobby wants to sell is not an idea but a product, the approach is a little different, though the principle is the same.

But if that’s all there is to lobbying, what made the prime minister so angry? And why did parliament applaud when he poured scorn upon lobbies and all their works?

What really annoys politicians is not the lobby in itself, but the lengths to which some lobbies go. The thing most furiously resented is any attempt to go over the government's head, or behind its back, and appeal directly to public opinion. This of course doesn't apply to disinterested campaigns (say, the case against capital punishment, or for recognition of Red China) but it does apply to any campaign for direct material advantage, especially if the question is one for expert judgment. A sudden outburst of well-written letters to the editor, news stories that seem to echo the lobby’s version of “the real facts,” suspiciously timely editorials or public statements — these things tend to become boomerangs.

Would any law prevent them, though? Almost certainly not. Some three thousand lobbyists have registered in Washington since the U. S. law on lobbies was passed in 1946, but an estimated ten thousand more are operating outside the law—and no decrease has been noted in either lobbying or its evils. Even Art Smith doesn't claim any revolutionary effect for a Canadian law. But he says: 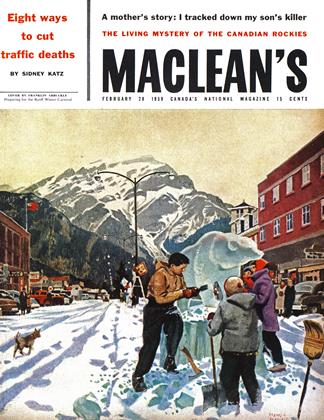