How dead is the spoils system in the civil service? BLAIR FRASER March 14 1959

ALMOST BURIED NOW in a pile of other work, but not yet quite forgotten or abandoned, is a task laid at parliament’s door just as the session began— revision of the Civil Service Act, which has been practically untouched since 1918. Everyone says the act should be made more “flexible,” but the word means different things to different people. Some want to make it easier for civil servants to operate their departments. Others want to make it easier for politicians to get jobs for deserving henchmen. Both can’t have their way, so the project will be interesting to watch.

The revision itself is long overdue. When the present law was passed the civil service had about forty thousand people, mostly clerks. Now it has four times that many, with skills ranging from nuclear physics to animal husbandry. 'I'hc Conservatives in opposition used to call for a “Hoover Commission" type of enquiry, to take a hard look at the public service and make it more efficient. One ok Prime Minister Diefcnbaker’s first acts after he took office was to ask the Civil Service Commission under its new chairman, A. D. P. Heency, to make a thorough study and report. The report was finished just before Heeney was reappointed ambassador to Washington. Its central recommendation is that the Civil Service Act be not merely amended, but completely rewritten.

General applause greeted the Heeney Report when it was published in midJanuary. but nothing has yet been done about implementing it. Normal procedure would be to have a cabinet committee study the report and decide on the general outline of a new statute, then have the justice department rough out a draft bill, then submit the draft to a committee of parliament. So far as can be learned, the cabinet up to now has been too busy to take the first step. Anyway, the law officers in the justice department will be too busy to take the second step for at least another month. There is still hope, though, that a new bill may be drafted and perhaps a parliamentary committee start work on it before the 1959 session ends.

As analyzed by the Heeney Report the problem appears quite straightforward—simply to go on from the achievement of 1918, and adapt it .to the needs of today:

“Forty years ago, the need, ^as for a civil service free from what Sir Robert Borden called ‘the malign influence of patronage’ . . . free from

nepotism, the coddling of incompetent favorites, the granting of promotions

for a consideration, and other internal abuses . . . (The present act achieved all this, but) it has become evident that a monolithic merit system is not in itself enough.”

One result of the “monolithic merit system” is that the Civil Service Commission, and the financial watchdogs of the Treasury Board, supervise things that are really none of their business. Department heads cannot even reorganize their staffs without first getting the approval of one or both of these authorities. Often it takes months to effect simple common-sense changes.

Also, it’s very difficult to fire a civil servant. It is not, as some people think, impossible — about thirteen hundred civil sevants were fired in 1957, not counting a large number of forced resignations. By the letter of the law any of them can be dismissed without cause and without notice. In fact, of course, this never happens. Dismissal requires an order-in-council from the cabinet. No decent man likes to throw another man out of a job, unless he really has to; in the civil service he doesn’t often have to, except for flagrant cause. It takes a lot of trouble, and earns little thanks, to get rid of a man for no other reason than that he isn’t much good.

To change this, the Heeney Report recommends more direct authority and more direct responsibility for department heads. Let each be responsible for the maintenance of proper discipline and efficiency in his department. Let each be able to recommend dismissals to the Civil Service Commis-

sion, which could thereupon act—instead of requiring a cabinet order as at present. All these suggestions take it for granted that the “merit system” —recruitment and promotion by competitive examination, not by the favor of politicians — would remain unimpaired.

The optimism may turn out to be justified. The government’s record on patronage, or the lack of it, has been good. Particularly Howard Green in public works, William Hamilton in the post office, George Hees in transport have held out against the spoils system in departments traditionally vulnerable to that sort of thing.

But this stand has not been taken without much effort and heart-burning. Back-benchers find it harder than ministers do to see the evil of patronage, and ward heelers find it hardest of all. They now feel as the Israelites might have felt if, after Jericho's walls fell down, they’d been told to leave the Canaanites undisturbed in the milk-andhoney trade.

The Tories have been so long in the wilderness, and had such special problems during their last two intervals of power, that you have to go all the way back to 1896 to find a fair parallel among the Grits. Times were different then. Dr. O. D. Skelton, in his biography of Sir Wilfrid Laurier, quotes the following letter from a Quebec supporter, after the Great Victory:

“If anyone had told me when I was fighting the battles of Liberalism in my county, striving without fear of attack or hope of favor to advance the cause

of the people, determined that no designing cleric and no corrupt politician would be allowed to shackle our noble country—if anyone had told me that six months after you took office I would still be without a job, I would not have believed him.”

Briefer and more poignant was the wail of a suppliant from eastern Ontario: “To think that after naming my only son William Lyon Mackenzie, I am still denied any post by a government that calls itself Liberal,”

These sentiments may be old-fashioned but they are by no means extinct. Leaving Grit incumbents in jobs is bad enough; Tory workers find it particularly exasperating when a vacancy does occur, and they learn that the worthy local Conservative doesn’t necessarily get the job.

This situation crops up oftenest in provinces like Nova Scotia, where a Liberal provincial government has recently been turfed out. Generally speaking, provincial governments pay less attention to the “merit system” than the federal government does, and nowhere (except Quebec) is this so true as in the Atlantic provinces. There, a change of government still means a considerable upheaval in the public service, and a lot of people suddenly looking for jobs.

Shortly after the 1957 election, a local postmaster’s berth fell vacant in Nova Scotia. It was only a small post office, but it was actually visible to the naked eye from the upstairs windows of George Nowlan, Nova Scotia’s cabinet minister. The postmaster had been ill for some time, and decided to retire. His assistant, who had carried on as acting postmaster during the illness, naturally expected to get the job.

It happened, by pure coincidence, that the acting postmaster was married to the daughter of a leading local Conservative. When he learned that he would have to write an examination to get the promotion, nobody in the village thought much about it—a matter of form, they assumed.

The examination was held. The winner turned out to be not the Conservative acting postmaster, but the president of the local Liberal association!

Then by the yellow Tiber

Was tumult and affright.

If this sort of outrage was to be allowed, what was the use of winning elections? Feeling ran high. Remonstrances were made to the Civil Service Commission, without effect—in the eyes of that august body, examinations were everything and political connections nothing. One man had passed and the other had flunked, and that was that.

In this emergency, somebody had a brilliant idea. The ailing postmaster decided not to retire after all; he remained on sick leave, the acting postmaster continued to act, and all was as before. If, as may happen, the postmaster should finally decide to retire this year, a new examination will be held.

But even such provisionally happy endings as that have been fairly rare. New MPs are dismayed to find their orders to deputy ministers and other civil servants ignored, and their favorites given no better chance than anyone else to get a government job. Some of them are very peevish about this.

Whether they will be able to bring their resentment to bear upon the new Civil Service Act remains to be seen. The chances are that they will try, anyway. ★ 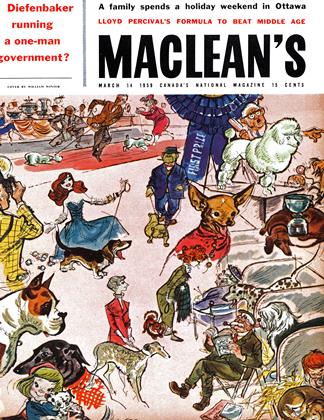