I notice that in any science fiction I’ve read about men blasting around inter-stellar space, and being captured by Aneroids. Montacks and The Caodai, who use words like “Svoloch!” and “Cominch!” nobody ever has a wife, a home or any of the problems faced by us 1959 Earth People. All this is good enough for a bit of light reading, but new worlds have never been conquered by bachelors. Unmarried adventurers may penetrate a new region, but they don’t conquer it, or even really explore it. New worlds have always been developed and acquired for the human race by married men with families, jobs and responsibilities.

Now that the U. S. has put a four-and-ahalf-ton satellite into orbit, however temporarily, I think it's time we took an honest look at what travel among the galaxies will really be like.

I can see a real conqueror of the world of tomorrow on his way into outer space. We’ll call him Stagite. He flips a switch on his control panel and announces, “Space ship X367 on flight plan ten thousand at nine point four seven, six thousand miles a second to northeast vector then in moon gravity to sine 33, cosine 39, tangent to outer orbit on Lark Rectifier.”

He settles back, watches the planet Uranus come up on his northwest quadrant and starts thinking of his bank manager, who sent him a note yesterday stating that he was eighty-seven cents overdrawn. At the thought of his bank overdraft, Stagite is reminded of his wife, who, at breakfast, told him that the dentist said their eldest daughter would have to have a special platinum brace on her front teeth, anchored to diamond-chip bearings, that the toilet was plugged again, and that she had noticed a funny bumping sound in the space ship last time he came in from the moon. Stagite had bared his teeth in the hall mirror through his cellulo-methanix helmet.

“I'll call you later if I get a chance,” he said, trying not to look too anxious to get into outer space.

“Do you think it might be spark plugs?” Mrs. Stagite persisted.

“Spark plugs! Look, you got any idea how a decentralized cobalt space blaster works?” “I don’t care if it works with an egg beater!” Mrs. Stagite said, flushing. “Why do you always get so touchy when I tell you there's something wrong with the space ship?”

“Svoloch!” Stagite muttered, remembering a bit of Martian he had picked up. He had thumped out the door in his gravity boots.

Now. watching Uranus fall back into his southwest quadrant, he thinks of his wife being stuck in the house all day, letting down hems. He wishes he hadn't been so bad-tempered. He resolves to call her later on the Visu-Earth Sphere, just as he notices that his orbit is bringing him in close alongside another company ship, piloted by a man named Roner. He quickly switches on to inter-ship communications and hears Roner's voice, crackling with excitement.

“Got something on my Space-Vu, Stagite!” says Roner. “Somebody out in Vector 34, transverse direction minus two to the third power of Lightspeed. He looks something like that guy from Galaxy 3/A42 we picked up. but he’s only got two arms.” “Let’s check on him.” Stagite snaps.

At 17.3 hours he turns the controls to absolute heat, sets his gyro to Light Pattern, pulls a thin opaque shell over his head, and watches a peculiar

craft on the tiny screen as it grows larger. The operator of the craft evidently becomes aware that he is being followed, for he changes direction abruptly and levels into the magnetic field of a small star in the third Sirius section.

Stagite reaches for his booster jets. The craft ahead makes another abrupt turn, and at the same time Stagite feels his ship slowing down as if caught in a great net.

Stagite reaches for a lever marked 5,000,000 Volts. There is a deafening roar as the field of ions disintegrates, and Stagite comes up under his prospect. Out of the corner of his eye he secs his Earth-Vu Sphere flashing. His jaws are clenched. Perspiration fogs his helmet. He checks his speed gradient, punches the button on the Earth-Vu Sphere.

“Where are you now?” his wife asks.

"Will you stop in at the Lunar Landing and pick me up some seam binding?” "For Pete's sake, honey! I’ve got this thing wound up to ten thousand miles a second. Cool a burner down like that and you're liable to be floating around outer space till the sun freezes.”

“How am / supposed to get out to do the shopping?”

“Okay. Okay. Look, I'm just going to reel in a guy from another galaxy.”

He hears his wife tell his son, “Daddy’s chasing a man from outer space." Then she says, “Ricky wants to know if you're going to kill him.”

“He wants to know if you’re going to give him your demolecule ray.”

"What kind of junk is that kid reading?” Stagite gets a signal from Roner that the other craft is now in their receiver loop. “Look. I gotta go. I'll see you later.”

A moment later, Stagite and Roner board the other craft and have the stranger in their identifier cell. He is a big creature with u'hat appears to be a

permanent smile. He nods vigorously, making the antenna-like member on his head whip back and forth. He is holding a small smoking object to his lower mouth with a peculiar pair of tweezers. He grins foolishly and mutters something that sounds like, “Gravit den obdent ¡¡¡fitter."

Stagite reaches for his IBM Interpreter, traces out a line and turns to Roner.

“He says that he's trying to cut down on his smoking. He cuts those things in half every morning. Figures that way he can have just as many.”

They find that the creature is from Galaxy 17/B37. He admits that he has a certain sales resistance, but admires their approach and is glad they called. He thinks their proposition of forming a Universal Communications Group sounds very interesting and says he'll put it on the radium pile and see if it boils. It’s mid-afternoon before they're ready to part and their orbit has brought them within a hundred thousand miles of the moon.

Just before he leaves, the stranger talks to his wife on his mind-current tube, grins and tells Stagite and Roner that his youngest boy wanted to know if the Earth People tried to inject slave cells into him. He says he'll have to leave as his wife wants him to pick up some celery on Jupiter.

"Contimit!” says Stagite, remembering his own conversation with his wife. They are already nearly past the moon.

He shakes hands hurriedly, gets into his ship, drops his inertia section, opens the taps on his light-to-sound gradient, quickly calculates his thermal slope, and comes in to Lunar Landing in a shower of sodium, free nitrogen, ionized oxygen, loosened nebulae barnacles, molten aluminum and profanity and asks the first drive-in clerk he secs for some seam binding.

“Do you want it for a curved seam?”

He gets Mrs. Stagite on the Visu-Earth Sphere. She tells him to get bias cut, and that Riekv tried to get his little sister under “Vaporize” on the instant-photo temperature cooker that morning and broke the electro-release. Stagite finishes his shopping and blasts off for home, wondering what a new cooker costs, if 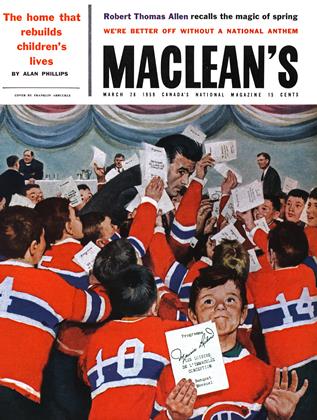