RIO BRAVO: Director Howard Hawks, who made Red River in 1948, has come up with another big, handsome and entertaining western. One measure of its success is that even Dean Martin, the drowsy crooner who used to cavort with Jerry Lewis, does what he has to do with solid conviction, his role being that of a former fast-gun expert painfully recovering from a two-year binge. Teen-idol Ricky Nelson acceptably portrays a cool junior lawman, and range veterans John Wayne, Walter Brennan and

Ward Bond are in good fettle throughout. Sheriff Wayne’s task is to prevent the liberation of an accused murderer by his wealthy kinsmen’s “private army.”

BACHELOR OF HEARTS: Much of the jocosity is awfully strained in this British comedy about a German youth (Hardy Kruger) who runs into hazings, secret societies and too many girl friends while “studying” at Cambridge University.

GIDEON OF SCOTLAND YARD: Hollywood's John Ford, who has sadly declined in skill since his great days as a director, has scant reason to feel proud of this heavy-handed crime comedy-drama, starring the capable Jack Hawkins.

IMITATION OF LIFE: A long deathbed scene and an even longer funeral pull out all the organ-stops of sentiment during (he final portion of (his twohour drama, hut it has an underlying warmth and sincerity beyond the scope of a mere tearjerker. The story—a remake of a 1934 film starring Claudette Colbert and Louise Beavers—traces the lives of two mothers, one white and one black (Lana Turner, Juanita Moore), and their restless daughters.

A QUESTION OF ADULTERY: A pretentious and trashy social-problem

drama. It sets up a serious ethical-legal point about the rights and wrongs of artificial insemination and then blandly dodges it with a trick ending. Julie London and Anthony Steel are the anguished principals.

UP PERISCOPE!: James Garner, of television’s Maverick series, does well in his first major screen role as a U. S. Navy frogman whose hazardous duties carry him behind the Japanese lines. The story is not without its quota of submarine clichés.

I he Hanging Tree: Western. Fair.

He Who Must Die: French drama. Good. The Horse’s Mouth: Comedy. Good.

Stranger in My Arms: Drama. Fair. 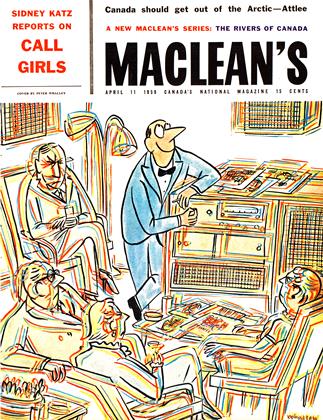