AN UNEXPECTED and little-publicized problem for the planners of this summer royal tour will be presented by the egg-shell crust of bluebottle enamel on the royal yacht Britannia. The 412-foot three-master’s hull is of steel, with a prime coat of a rough plaster. If she knocks any hard object, the enamel peels in huge chunks. Usually, Britannia stands offshore —away from wharves and other craft — but at Montreal she’ll dock at a carefully padded floating anchorage to welcome President Eisenhower aboard. Seaway locks will be lined with special rope bumpers to cushion Britannia’s sides.

SLITHERY LAMPREYS that have all but ruined Great Lakes

trout fishing could soon be brought under control thanks to nuclear science.

Biggest problem has been scientists’ inability to trace them.

Now at London, Ont., fisheries researchers under Dr. David Scott are testing equipment to make larval lampreys radioactive. Then they'll hunt them down with geiger counters. Once the life pattern’s established, war will be easier to wage. Next target for atomic tracers: mosquitoes.

OUR RADIO PERSONALITY will be laid bare to British listeners in June when the BBC broadcasts 10 hours of Canadian programs during a special Canada Week. How will we sound? Here’s what the CBC’s lined up: an hour of the CBC Symphony; a W. O. Mitchell play; Neil Chotem’s Orchestra from Montreal; Phil Nimmons’ jazz; an informal hour from Trans-Canada Matinee and a rebroadcast of Wayne and Shuster’s special half - hour Queen Victoria Day show.

THE INVENTION THAT’S REPLACING ZIPPERS will probably make a fortune for a scion of one of Canada’s most powerful financial houses.

Ben Webster, a 28-year-old nephew of Montreal industrialist and Toronto Globe and Mail owner R. Howard Webster, is half-owner of the Velok holding company. It has North and South American and Far Eastern rights on Velcro—a fabric combination that clings like glue but can be separated by the slightest tug. A factory opened in Three Rivers, Que., last month. Webster, now spending half his time in New York, told Maclean’s: “We’ve already got more orders than we can handle.”

THAT OLD FAMILY SILVER may have a lot more than sentimental value. If the craftsman’s marks match any at right, your plate could be worth a hatful. You’ll be able to make a full check this fall, when John E.

Langdon publishes the first definitive book on early Canadian silver. Langdon, a Toronto investment dealer and former Financial Post writer, told Maclean’s: “Some of the world's finest silversmiths were 18th century Canadians. Their work is valuable today.” So will the book be. Probable cost: about $20.

GOLD COINS (we haven’t had them since 1914) may soon be back in our pockets. Scientists of the federal mines department under Dr. John Convey are working on a gold alloy cheap enough to stamp into convenient size. They’ve already come up with a $10 piece. Reason for the experiments: to find ways to use up our excess gold. Convey’s scientists are also checking into two other possible uses: as insulation in long-range missiles and in the fight against cancer. Gold, which turns to mercury under radioactive bombardment, has been used in the treatment of John Foster Dulles.

WHAT SOUNDED TO MANY SKEPTICS like a fanciful gadget when Maclean’s first reported on Osmond Kendall’s Marvelous Music Machine (June 1 1, 1955) now is the basis for a new field of studies at the University of Toronto. Dr. Arnold Walter, head of U. of T.’s music faculty, is setting up a studio for electronic music. The National Research Council’s also interested. Secret: the composer draws his orchestration on a sound track—no musical instruments necessary. 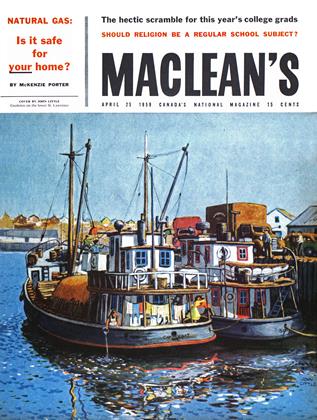