WARLOCK: Henry Fonda (right) as a graceful, sardonic and thoroughly efficient free-lance “town tamer” and Anthony Quinn as his devoted but sinister side-kick are the most interesting characters in this solid “adult western.” With Richard Widmark, Dorothy Malone.

CARRY ON NURSE: This kind of trash often flourishes at the box office but discriminating customers are hereby warned that it's a vulgar and repetitious hospital farce from Britain. Rating: poor.

GREEN MANSIONS: The ethereal Audrey Hepburn was a good choice to portray a mysterious “bird girl” of the Venezuelan forests in the screen version of W. H. Hudson's novel. But Mel Ferrer’s ponderous direction and a gauzypoetic ending defeat the worthy project. With Anthony Perkins, Lee J. Cobb.

THE MAN UPSTAIRS: An intelligent, decently done psychological drama from Britain. Richard Attenborough appears as a man whose emotional turmoil brings about a virtual state of siege in the drab lodging house where he is hiding from the world.

WATUSI: A Sequel to 1950’s King Solomon’s Mines. Some of the African jungle-and-veldt scenery is eye-filling but the story and acting are not much above the comic-strip level. With George Montgomery, Taina Elg, David Farrar.

THE YOUNG PHILADELPHIANS: The sudsy flavor of old-fashioned daytime serials is often prominent in this overlong high-society drama but the job is done with a lot of skill throughout. Paul Newman's role is that of a toughminded young lawyer who gradually discovers he’s a better human being than he had supposed.

GILMOLR'S GUIDE TO THE CURRENT CROP

Ice-Cold in Alex: British drama of war in desert. Good.

It Happened to Jane: Comedy. Good.

The Lost Missile: Science fiction. Fair. Me and the Colonel: Comedy. Good.

Smiles of a Summer Night: Comedydrama from Sweden. Good.

Too Many Crooks: Comedy. Good. 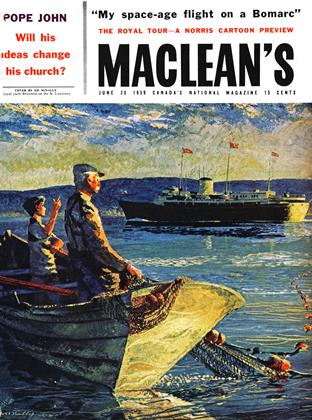