cordial thanks for your beautiful issue on Quebec (May 9). If ever understanding and union between the two racial elements of our country are realized, we shall owe Maclean’s a very great share of the credit. — REV. JOSEPH A. TURCOTTE, OMI, FORT SMITH, N.W.T.

^ . . . should be republished between hard covers and put on book stands across the country. 1 am sure it would be a great help to students in high schools and universities. — MARCEL

^ Your opulent and very successful “new look at the French Canadian” exhibits an insight for which you should be warmly congratulated. It is a coura-

T he editors (as seen by Fey er) take a bow

geous gesture. Discovering that the French Canadians have a normal way of life and that they can have their good points has never made popular copy. — LUCIEN PICHÉ, UNIVERSITÉ DE MONTRÉAL.

^ If even a few of the many who think of the French Canadians as miles removed from us can realize how unimportant are the things that separate us. it will have been more than worthwhile to have turned out this very beautiful issue. - MRS. E. ANNE RYAN, ONT.

Interesting reading . . . but somewhat one-sided and inclined to convey a wrong impression to outsiders, as so very little has been said about the "minority” in this province. No wonder Americans are concerned about being understood if they speak English in Quebec. — M. PARR, LACHINE, QUE.

While I greatly enjoyed the articles by Hutchison, Creighton, MacLennan. Fraser, et al, 1 was dismayed at the absence of an article by Mason Wade. A contribution by Wade, whose Herculean literary effort, The French Canadians, ranks him as a brilliant authority on French Canada, should have been a “must.”—BRIAN MULRONEY, ST. FRANCIS XAVIER UNIVERSITY, ANTICONISH, N.S.

*■* Bruce Hutchison is doing a wonderful job in getting us to appreciate Canada in all its aspects. — REEVE MARY FIX, TORONTO TOWNSHIP, ONT.

have quit while he was ahead. In the last paragraph he took a stab at a sentence in French (Vive Canada) — and fluffed it. - ROBERT MARJORIBANKS, TO-

I do not think it is correct to say that the French Canadians who sailed on the Ocean King on Sept. 14, 1884, for Alexandria, were the first ones who “voluntarily left home to take part in an overseas war,” (Canadianecdote May 9). Some fifteen years earlier a contingent of French - Canadian volunteers took part in a European war. The men, known as Papal Zouaves, went to the defense of the beleaguered Pius IX in his struggle for temporal power of the papacy. - WALTER ULLMANN, UNIVERSITY OF ROCHESTER, ROCHESTER, N.Y.

Your cover suggests a magnificent Canadian flag: gold and blue, without any other sign. Gold ... for faith in God. richness of subsoil, mines, greatness of Canada, the sun shining almost 24 hours a day on our country. Blue ... for French origin, English blue blood, happy marriage of French and English culture, Canadian contribution to the United Nations, new skies for immigrants.

I cannot understand why painters do such smearing and distorted daubs as shown by Jean Dallaire and Leon Bellefleur in your album. Eight Artists

I wish I knew the name of the person responsible for the excellent selection of paintings, from the Dream of Alfred Pellan to the nostalgic view of Robert Pilot's Rue des Jardins without leaving out the gigantic treatment of Jacques de Tonnancour's landscape. — PIERRE

Eulogy for the Elegy

I should like to say how much I enjoyed Hugh MacLennan’s article on the St. Lawrence. But I must take issue with him when he refers to Gray's Elegy as a minor poem. I was brought up to consider it one of the finest in the English language. — D. MORGAN, VANCOUVER, fr 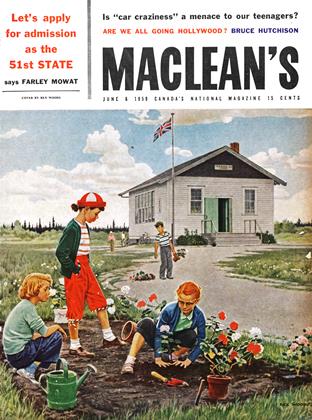