A HOLE IN THE HEAD: Frank Sinatra appears as a lighthearted Florida widower with a twelve-year-old son (Eddie

Hodges) in this pleasant Hollywood comedy. But it’s Edward G. Robinson (right), as Sinatra’s wisecracking brother, who runs away with the picture. Thelma Ritter plays Robinson’s wife Sophie, described by her spouse as being so sentimental that she cries at hockey games. Keenan Wynn contributes a fine malevolent sketch of a bigshot showman.

THE FIVE PENNIES: Danny Kaye in a musical biography of Red Nichols, the cornet man who became a top figure in the jazz world until parental worries forced him into retirement. A bit too sobby in spots, the film rates “good” for its exuberant music, its sharply detailed Jazz Age atmosphere, and Kaye’s likeable performance. With Barbara Bel Geddes, Louis Armstrong.

LAST TRAIN FROM GUN HILL: Unless free westerns on TV have eliminated too many of the customers, this solid big-screen opus ought to prosper. It’s about a sheriff (Kirk Douglas) and his relentless pursuit of the two men who raped and killed his Indian wife. With Anthony Quinn, Carolyn Jones, Earl Holliman.

MIDDLE OF THE NIGHT: Some of the sharp edges in Paddy Chayefsky’s fine stage play have been blunted in his own screen version, although there are many good moments. It’s about a New York clothing manufacturer (Fredric March) who falls in love with a divorcee (Kim Novak) younger than his own daughter.

TIGER BAY: The title refers to a squalid district of Cardiff, Wales, where a young Polish sailor (Horts Buchholz) is hunted for the murder of his mistress (Yvonne Mitchell). This may not sound promising but the film wins sympathy from the start — and it offers a memorable debut by actor John Mills’ twelveyear-old daughter Hayley. 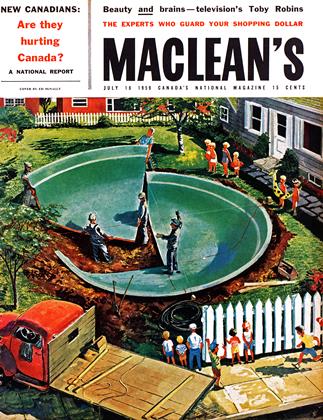