It is just possible that some of the younger readers of Maclean’s have never heard of Bruce Bairnsfather and his immortal Old Bill of the 1914-18 war. Let me admit that for many years I heard no mention of his name and, indeed, was unaware whether he was still alive.

But as it happened I recently traveled by train through the lovely countryside of Oxfordshire to the town of Worcester where I was to speak at a dinner. With a single sentence our host sent my mind whirling back to the forgotten years.

“You know,” he said, “that Bruce Bairnsfather lives here in Worcester.”

Bruce Bairnsfather! Which of us who lived through the 1914 war could ever forget those cartoons of Old Bill? The phrase “Well, if yer know of a better ole, go to it” became part of our language. It was so popular that a revue called The Better ’Ole was produced and had a long run. Somehow in the trenches Bairnsfather continued to draw Old Bill pictures that appeared to our joy in the Bystander magazine.

With these thoughts in my mind I wrote to Bairnsfather, inviting him to lunch with me at the House of Commons, and he accepted.

Now I would see the incarnation

of the early Briton with the preposterous moustache, the warrior who looked like a pub-keeper, the comic who laughed in No Man’s Land. Every author reproduces himself in one form or another and now I would see not only Old Bill but his creator.

As it was a lovely warm day I went on the terrace and asked the attendant to send Captain Bairnsfather to join me there.

Some minutes passed and the terrace was becoming populated with various types, drawn out of doors by the warming sun, but there was one man who stood rather shyly by himself. He had a quiet, modest manner and seemed rather diffident. But where in the Dickens was Bairnsfr'her?

Yes, you are quite right. That modest, unobtrusive man with the librarian look was the immortal B.B. trying to find the mortal B.B. who had asked him to lunch. So we made contact, yet not even a glass of mild sherry sent his tongue wagging and it seemed that here was a creative artist who had nothing really in common with the character he had created.

And then suddenly he threw off his diffidence and at my request began the story of himself and his brainchild, Old Bill. Here then is

a man who broke every rule in a success story and acquired a fame which borders on immortality.

His father was Scottish, his mother was English, and he was born seventyone years ago in the Himalayas, in very primitive surroundings. When his family returned to England, he was sent to the United Services College at Westward Ho!

The young Bruce was pleased about one thing: Rudyard Kipling had also gone to the United Services College. Actually it is an accepted fact that the immortal Kipling used the college as the setting for his Stalky and Co.

“I never dreamed then.” said Bruce, “that I would live to see the day Kipling would look at my drawings and deliver the verdict: 'Bloody good!'"

But it seems that the Kipling episode was an exception. Bairnsfather was not doing well at school. He kept on drawing quaint little figures when he should have been learning Latin. He also drew cartoons of his fellow students. One day he was knocked out by a blow to the chin. He had made the elementary mistake of drawing a cartoon of the chief bully.

But under the toughness and roughness of the school he was discovering his real self. “My desire to draw and paint remained unabated and 1 continued to gratify it in and out-of-doors.” With the realization that even an artist must eat. he used to sell his drawings for half a crown or five bob to his fellow students.

But he wanted to reach a wider public than his school mates. After many false starts he executed a design for Player’s Navy Tobacco mixture and had it accepted. “My pride and excitement bordered on the insane,” he said. “I kept that twopound cheque in my pockets for weeks, producing it on every possible occasion, until I thought Í had better cash it while it was still intact.”

As he had shown no promise in anything else it was decided that he should take up the army as a career, and eventually his military training came to an end. Swiftly he poised the dilemma to his own judgment and for his own decision. He did not want a sword in his hand, he wanted a pencil. Being an officer the army offered him security at any rate in peace time. And after many years he could then retire and take up his pencil.

"Instead I decided to quit the army and take my chance,” he said. He was then eighteen.

(Someone down on the terrace at Westminster laughed. Passengers on a crowded launch pointed at us and even waved their hands. As the next election is not for off 1 waved in return.)

When war broke out in 1914, Bairnsfather rejoined the army at once. In the mud and the blood of Flanders the soldier-artist kept his sanity by creating Old Bill, the moustached British soldier who regarded the “superman” in the German trench as a figure of perverted fun. Bruce had already drawn several pictures for the Bystander but Old Bill made him a world figure.

But this man was more than a cartoonist. Take his most famous drawing which is before me. There in the trench are two hairy British tommies — Old Bill and his gloomy, complaining pal. The grouser has obviously been taking it out on the hole in which they are crouching whiie bursting shells play havoc all about them. At last the patience of Old Bill is exhausted and with magnificent disdain he declares: “Well, if yer know of a better 'ole, go to it.”

The drawing duly appeared in the Bystander and Britain rocked with laughter. Yet behind the humor and the comic genius of the drawing there was the artist's feeling of pity toward these two cockney orphans of the storm.

But why is the genius of Bairnsfather still remembered? Surely the answer is that his drawings were based on truth, and in them he gave expression to the

British soldier who finds humor in the very hell of horror.

The personalities of a war are usually soon forgotten. Yet unknown and unsuspected by himself Bairnsfather had created in Old Bill a character which did not fade away.

He did many more Old Bill cartoons, before, during and after World War II. During this war he was attached to the U. S. army in Europe as war cartoonist.

ory to him. Even the Americans welcomed with enthusiasm this soft-spoken caricaturist with his pen of genius.

Almost as if he were asking a favor he suggested that he draw a special sketch to accompany this London Letter and it appears on page 8.

Like most men of courage Bairnsfather is gentle at heart, and like most men of genius he is modest. This might well be his epitaph in the years to come:

“He gave the solace of laughter to the nation even as it shed its blood for the survival of human decency.” ^ 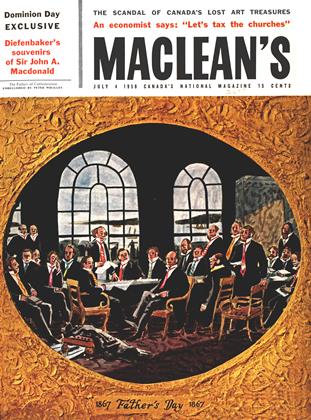