THE NUN'S STORY: Audrey Hepburn gives the finest performance of her career in this beautiful film. Based on the book by Kathryn Hulme, it dramatizes—but never falsifiesthe efforts of a strong-willed young Belgian girl to accept completely the selfless way-of-life adopted by a Catholic order of cloistered nuns. Ap pearing with Miss Hepburn is Peter Finch as an agnostic surgeon who

works with the new' nun at a hospital in the Congo. The excellent cast also includes Dame Edith Evans as a wise and oaken Mother Superior. This picture freshly establishes Fred Zinnemann, of High Noon and From Here to Eternity, as one of the most adroit and sensitive directors in the profession.

THE DIARY OF ANNE FRANK: The tragic but occasionally hilarious true story of eight Jews who hid in an Amsterdam attic for two years before the Nazis dragged them off to concentration camps. The film, for all its power and humanity, is too long and moves too slowly toward its inescapable ending, hut it remains a prime contender for one or more Academy Awards. In George Stevens’ cast are Joseph Schildkraut, Shelley Winters, Ed Wynn, and newcomer Millie Perkins as the title-role teenager.

HERCULES: T he mythological superman is portrayed by brawny Steve Reeves in this Italian-made extravaganza. I’m sure it’s not supposed to be funny hut connoisseurs of the absurd arc likely to consider it a collector s item.

THE HORSE SOLDIERS: A corny but entertaining Civil War adventure

directed by the ebullient John Ford, a seasoned interpreter of American cavalrymen in all their rootin’, tootin’ glory. With John Wayne, William Holden, Constance Towers—and a bit part by Hoot Gibson, a western star of yesteryear. An attractive musical score is a further asset.

SHAKE HANDS WITH THE DEVIL: Famed professor of surgery by day, fanatical freedom-fighter by night. Hollywood’s James Cagney is in good form in this British drama about the 1‘>2I Irish rebellion against British rule. Touches of melodramatic hokum in the story diminish its impact hut fail to disqualify it as a worthy specimen. With Don Murray, Dana Wynter. Glynis Johns, Michael Redgrave.

THE SLEEPING BEAUTY: Walt Disney’s latest, costliest feature-length cartoon. It probably will make millions in dollars, pounds, marks and other currencies hut there is a dismaying monster-horror bigness in this inflated version of the fairy-tale. 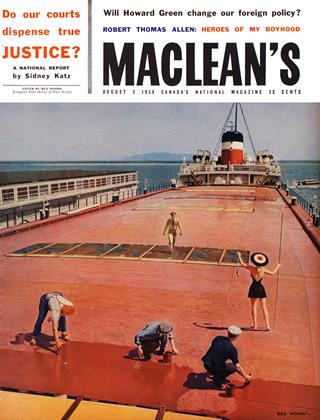