EVERY MAYOR in Canada likes to picture himself, publicly and probably privately, as a working dynamo, tirelessly slugging for the municipal weal in every minute he can squeeze from his own affairs. More often than not, that picture’s pure election fodder. But one man comes astoundingly close to fitting it.

He’s Mayor “Hopalong” Harry Veiner of Medicine Hat. Alta., who may just be the world’s most strenuous mayor. Occasionally, as when he dipped into his own pocket to give every Toronto Maple Leaf $100 for beating Boston in the Stanley Cup semi-finals (“Why not? I'm a fan”) or when he presented the mayor of Moscow with a red Stetson, Veiner bursts into the national news. But his daily schedule, which never makes headlines, is just as amazing.

By rising at 4 a.m. and working till close to midnight, he runs, at 55, half a dozen huge Alberta

ranches, a china factory, a hardware store and three wholesale outlets as well as the city’s business.

At the drop of a Stetson, he scoots off on periodic trips—at his own expense—to boost Medicine Hat wherever in the world he thinks there’s an ear to bend.

^ outraced the mayors of Brandon, Regina, Moose Jaw, Swift Current, Pincher Creek and Lethbridge over various distances and once—at a Brooks, Alta., picnic— won by 10 yards a 25-yard sprint against a thoroughbred horse;

outpulled the best cowboys around Taber, Alta., in a wild cow milking contest;

^ outplowed all the mayors of Western Canada at a Portage La Prairie convention contest;

*" almost out - gobbled (they tied at 40 each) the official flapjackeating champion of Lethbridge;

Probably Veiner’s greatest political disappointment was during the ’54 Empire Games at Vancouver when he challenged every mayor in the Commonwealth to a footrace and got no takers.

The Hat voters lap it up; Veiner clobbered his last opponent by a 3-to-l majority. But his popularity doesn't stem solely from his flamboyant showmanship. Under Veiner’s regime, the city has:

* rung up the country’s greatest safety record — over four years without a fatal accident;

not raised its taxes or, until this year, needed to borrow money;

* begun a co-operative bus system (Veiner bought the buses with his own money) that’s earning a wide reputation for the courtesy of its shareholder-drivers;

* more than doubled the salaries of its eight aldermen.

But Veiner won’t take a raise. And he sets aside about a third of his $3,000 a year as a special fund for The Hat’s aged and needy.— 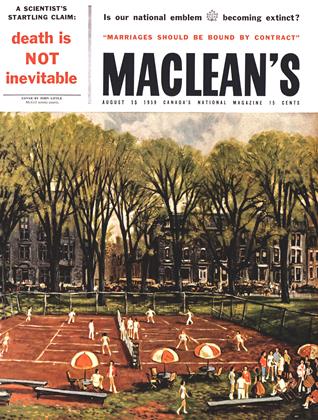