Raising a family is a cinch these days, what with all the reliable child-rearing pamphlets put out by various authorities including governments. Not to be overlooked is the free one issued by the provincial authorities in B. C., entitled How to Tan Small Hides.

The furor over the cancellation of the Avro Arrow contract may have been forgotten by some hut it’s still a sore subject with the air force. RCAF Station Winnipeg’s Newsletter recently carried this notice: "All occupants of married quarters are reminded that the use of slingshots, air guns, bows and you-knowwhats is prohibited.”

A treasured possession of a Montreal family is a beautifully illustrated Bible, which the young daughter of the house loves to look at. One day as she was turning page after page impatiently, her mother asked her what she was looking for. The reply left mother rocking violently: "A very funny old man and I don't know whether I saw him here or in the funny paper.”

A home-bound Vancouver woman says she found the length of the rush-hour queue discouraging enough as it was: and then she saw a home-bound bus

driver, standing just behind her in the line, step disgustedly out of the queue and try thumbing a ride from passing motorists.

Amid a nation some feel to be overrun with bureaucrats and organization men. a Parade scout has discovered a ruggedly individualistic small businessman who is getting along very nicely. The evidence is the sign he mounted on his door in Washago. Ont.:

"Due to old age. lack of initiative and a fondness for the great outdoors, this mill, known and registered as the Washago Feed Mills and operated by Sam Langman. will close at 12 noon starting the first Saturday in June and continue to close each and every Saturday at noon until the weather gets tough.”

An Ottawa couple certainly got their money’s worth when they ordered a new electric dishwasher. With delivery promised within three or four days, they swore they’d washed their last dish and happily used up every dish in the house, stacking them dirty after every meal to await the

arrival of the new wife-saver. It arrived just in time—and sprang a leak on the first load. After it broke down completely it took maw and paw two solid hours to swab the dishes the hard way.

Overheard by a lady in New Glasgow, N.S., having passed the same group of youngsters several times while very slowly learning to drive her new car: “Here comes that lady walking her car again!” * * *

City slickers would never stop to think of it, but if you operate one of those tractors with a vertical exhaust pipe you must always cap it with an old tin can when done working to keep out possible rain. If you forget to take it off before you start up the motor again the can goes sailing spaceward, to the amusement of any onlookers. But there were no onlookers when a Bluffton, Alta., farmer forgot to decap—only the farmer himself with an egg-sized lump on his noggin. Lacking a handy tin can, he had covered the exhaust with a handy flat rock.

An Ottawa resident who recently moved back to that city ran into a telephone shortage. Actually, she did get a phone she can call out on, but due to a temporary shortage of facilities she can’t receive any local calls. However, as she soon discovered, she can receive long distance calls—the telephone people send a messenger around by car to ask her to dial the long-distance operator and be connected for a waiting call. 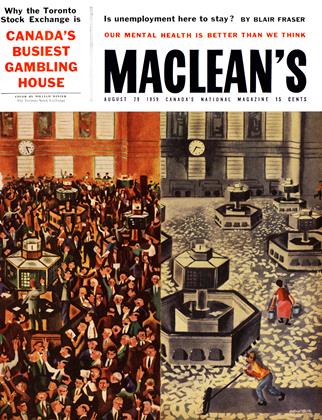