A FEW COMMENTS on Death Is Not Inevitable (Aug. 15). 1. Why the hokum? The sensational title to an article that is basically a plea for research funds gives a somewhat fraudulent air to a worthy purpose. 2, Dr. Selye's point about expenditures on obsolescent military weapons being used to better purpose on research for advancement of medical (and other sciences) appeals to me. I would like to have some of my tax dollars diverted from defense to other research and thus beat a few swords into plowshares. 3, As to prolonging human life, perhaps a goodly share of research funds should go to finding ways of improving the extra days that [might be] more of a burden than a BLESSING.-D. E. JARDINE,

* Selye says four times as much money is spent every year on funeral expenses as on medical research. The ancient Egyptians were noted for the over-importance they attached to matters concerning the dead. It would seem that although man has advanced immeasurably in technical matters since those ancient times, in others he has more or less stood still. — w. E. SIMPSON, TORONTO.

* My thoughts went back to that saying of 3.000 years ago, "Man shall live but three score and ten" — in other words, about 70 years. And it set me thinking — will God allow his word on length of life to be tampered with? —

abortion and sterilization. If not. and we are all to live indefinitely, in time we will have to be stacked like cord-

Royalty in a wringer

Too often the rude fury and fanfare of ignorance that greets each opportunity to run royalty through a wringer stems from our individual susceptibility to brainwashing by gossip. Granted. C añada has the choice of being mute and mutinous when history is in the making but one wonders if it is the press or the people that take the prize for rudeness? Our national attitude to the monarchy does stand in need of reappraisal! —

Surely an MP like Sir Beverley should know that up to January 1916 there was absolutely no conscription of any kind in the United Kingdom.—w. DELAHAYE

The dramatic results in one example quoted by Dr. George S. Stevenson (How to curb your tensions. Aug. 15) led me to wonder if they perhaps represent a breakthrough in a new field of medicine. One can visualize an ulcerridden tycoon recovering completely be-

fore the surgeon has had time to sharpen his knife — just because the tycoon has spent the day pouring out his business worries in the sympathetic ear of the spinster in the next bed! — j. F. HILL, KITCHENER, ONT.

*" After reading How To Curb Your Tensions I was as tense as an overwound clock. (Stop reading and think about this problem.) — w. E. BEACOM,

I was most interested in Sir Harold Boulton's article, I survived the sinking of the Lusitania (Aug. 1). I too am a survivor. He says emphatically the Cunard company was most generous.in handing out compensations for personal effects (I suppose) lost in the sinking. I got nothing whatsoever. I sent in my claim with others on July 7, 1915, and received this reply: "Whilst we deeply sympathize with you, we regret compensation is not payable by the company . . . We suggest you communicate with the Under Secretary of State for Foreign Affairs, London, with a view to receiving compensation from Germany at the end of the war. We are passing your communication on to the Committee of the Lusitania Relief Fund, from whom you will doubtless hear in the course of a few days." This was the last I ever heard from this "generous company.” I may add, at the time I bitterly resented them referring my claim to the "Relief Fund.” I did not need charity, but did expect decent TREATMENT.-FDVVARD TARRY, VANCOUVER, B.C.

To correct Trent Fray ne (Winnipeg's maverick of the sports mike, Aug. 15). Marquis wheat passed from the prairies with the depression, to be replaced by newer, rust-resistant STRAINS.-D. B. AN-

Backstage with Drinking (Aug. 1) suggests that we may have graduated from the primitive and are becoming more sophisticated — via champagne. Instead, by adopting the drinking habits of our European immigrants, are we not simply acquiring primitive ones from which the old world has not yet been able to free itself? - M. MACLENNAN, VICTORIA.

Allow me to express my appreciation for Are New' Canadians Hurting Canada? (July 18). This is the first time I have seen any article making an attempt to deal with this problem honestly and without bias . . . And Hugh Garner positively merits a medal for bravery. In my tenyear career as a New Canadian this is the very first time I have ever seen an Anglo-Saxon as much as admit that racial discrimination exists and is practiced by his compatriots. - TATIANA PAVLYCKA,

^ Are New Canadians Hurting Canada? They need not, if we already here in a land our fathers and mothers developed and which millions have died to preserve see to it that they do not. Any new immigrant coming to a country for no other purpose than to better himself, should conscientiously show' deference to that country and its institutions and symbols. - MAURICE CARDEN, VANCOUVER.

We want to commend writer Peter Newman and photographer Malak for the excellent treatment of The Driveway (Streets of Canada, Aug. 1 ). Although it is difficult to portray in words the personality of a city, a street, a river, your continuing series on these subjects has been eminently successful. - PETER H. AYKROYD. DIRECTOR, INFORMATION DIVISION, NATIONAL CAPITAL COMMISSION, OTTAWA.

In bis excellent article. Do Our Courts Dispense True Justice? (Aug. I ) Sidney Katz falls into a common error when ho says "the consent of all provinces is required to change the BNA Act." Unfortunately. this has been repeated so often by those who would like it to be so that it is now received by many as an article of faith. The fact is that since I8fi7 the BNA Act has been amended many times although one of its several claims to distinction is that no one knows for certain what the number is. On three occasions formal amendments were passed on the simple request of the Canadian government without reference to parliament. Normally, however, they are passed on an address by parliament and not until 1907 is there a single instance of the provinces being consulted . . . On the 194? amendment which postponed redistribution of seats in the Commons the provinces were not consulted even though the legislature of Quebec passed a resolution of protest and the Quebec Leader of the Opposition (Mr. Duplessis) demanded that Mr. King forward the protest to Mr. Churchill. It may be accepted, therefore, that the action of the

British Government is to be regarded as automatic and without question for they cannot recognize other than the federal parliament as speaking for Canada. After all, every province is represented in that body and the MP from Quebec as truly holds a brief for that province as an MLA or MPP. - F. L. P. ANDERSON, MONTREAL.

1 am a fan of Eric Nicol’s at the w-orst of times—and there are a few—but his For the Sake of Argument (If hangings continue—make them public. Aug. 1 ) is one of his most brilliant pieces of writing. It is time more of our sociologists and public commentators spoke out against the barbarous and useless custom of wasting our potential human resources by continuing to employ capital punishment, a practice which, as Mr. Nicol pointed out, accomplishes nothing as a deterrent and does grave harm in that it constitutes torture, an activity which can only be engaged in by hardened men. - MISS

* While concurring in principle with Nicol’s thesis, I feel he does not go quite far enough. A hanging is something done in the name of the whole body politic. Surely, then, it is undesirable that the actual deed should be carried out every time by the salaried minion. I suggest that the hangman or hangwoman should be chosen at random from the general public, just as the jury is chosen at present; with everyone eligible and no one EXEMPT.-REV. J. O. A. STEVENS, SMITHERS, B.C.

^ Nicol shows himself to be one of those puzzling people who are revolted at the idea of judicial execution, but who can

suggest, with apparent equanimity, life imprisonment as an alternative. To my mind, the latter is by far the more savage punishment. If the penalty for murder is to be changed at all. it should become “either execution or life imprisonment, at the pleasure of the CONVICTED."-GIBSON INKSETTER, HAMILTON.

* While Eric Nicol may suggest public hangings with tongue in check and a smile of amusement let us remember that “there’s more truth spoken in jest than this world dreams of.” I'm writing my MP and positively stating my objections to hanging — public or private! — MRS.

Hamilton's Marvelous Mountain (July 18) brings a memory of a boy of seven born in Hamilton who. on leaving the James Street Incline in 1922 (we were having a picnic there) knelt on the mountain brow and said. "Miss Jowett, it is so beautiful, I must say my prayers" and he began, “Our Father who art in Heaven." 1 understood, because the apple trees there were clouds of pink blossoms — such is the pow'er of spring beauty on a child's heart and mind. That boy is now a surgeon in charge of a Nigerian Mission Hospital. — MISS C. JOWETT,

That w'as a real cool pool on the cover (July 18) by Ed McNally, but I see no net to prevent the eagerly waiting moppets from drowning on their first venture into the deep green, despite the fact that the pool appears to be close to six feet 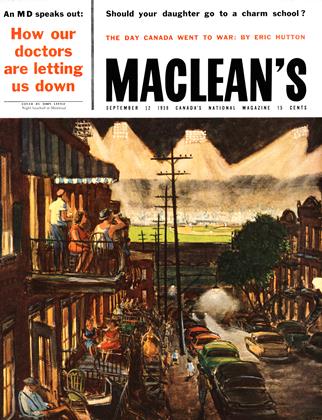