THIS TIME last year as parliament opened, the outlook for the opposition parties seemed clear and simple. With unemployment still at a postwar high, the government faced the certain prospect of a tax increase or another budget deficit or (as it turned out) both, and the opposition had only to wait for its cue to say “I told you so.”

This year the situation is more complex. Unemployment in most areas is down to fairly moderate levels. National revenues are rising. If expenditures can be held in line, and the Treasury Board has been making Herculean efforts to hold them, the chances of a balanced budget for 1960-61 are excellent. There is no scarcity of important issues before parliament, but choosing sides is no longer easy or painless. The real issues lie in the related fields of defense and finance, and nobody knows the answer to the root question: What kind of defense policy do Canadians really want? What kind are they willing to pay for?

Servicemen take a rather cynical view of Canada’s recent interest in disarmament, shown at the North Atlantic Council and the United Nations. The fact is, they say, that Canada is already disarmed. All three Canadian forces are mainly equipped with obsolete weapons of little or no use in modern war, which can only be replaced at tremendous cost.

It is now sixteen months since the Canadian army announced its adoption of a new tactical concept. With modern weapons, a brigade could hold as big a sector of front as two World War II divisions. Trouble is, the modern weapons are still lacking. The army still

intends to use the American Lacrosse, a guided surface-to-surface missile that can carry a nuclear warhead, but the Lacrosse is still in the experimental development stage and Ottawa can’t seem to find out when it will go into production.

The RCAF has been promised, and will soon begin to receive, made-inCanada versions of the American Starfighter for its eight Sabre squadrons in Europe. The other four squadrons overseas, and all RCAF fighter squadrons in Canada, still fly the CF-100, which would be no more use against a Russian bomber than a World War II Spitfire.

As for the navy, national defense spokesmen admit that of the forty-two ships committed to NATO’s Atlantic command, at least half and probably three quarters are utterly worthless for the purposes of war. They have a certain usefulness as training vessels, keeping a naval force together and giving it practice in sea duty, but that is all.

“We could scrap at least half of our ships, cut the navy down from twenty thousand to ten thousand men, and it would make no difference to the safety of Canada or of NATO,” said one senior man at national defense headquarters. “But what would happen to the port of Halifax?”

That's the kind of question that makes national defense such a difficult issue for political parties. The armed services are a major industry of the Atlantic provinces, the cornerstone of Maritime prosperity today, and they are a massive contribution to other provinces as well—shipyards, aircraft factories, the infant industry of electronics, and so on. These give pause to the

people who would advocate, as some are tempted to do, reductions of hundreds of millions in defense expenditures.

In fact the Canadian defense budget has been reduced slowly but steadily ever since 1953, when the post-Korea rearmament program hit its peak. In those days, defense cost us eight and a half percent of our national product, and nearly half of our entire government expenditure. Today, while all other costs of government have risen and the national product is ten billion dollars more, the total for defense is actually smaller by a couple of hundred million.

It’s evident that the present figure, roughly seventeen hundred million dollars a year, is a rigid ceiling—the forces can hope for no more, unless there is some kind of emergency. They must therefore calculate how to rearm with modern weapons, a forbiddingly expensive project, without going beyond the annual expenditure of the past two or three years.

In consequence, some officers are beginning to wonder out loud how long Canada can afford to keep a brigade and an air division in Europe. West Germany, a wealthy country now, is supposed to put twelve divisions into the NATO pool. For Canada to go on supporting one thirty-sixth of that number in the Rhine valley, at a cost per man which is absurdly high, makes very little sense — either military or economic. But on the other hand, what would be the effect on the shaky structure of the North Atlantic alliance if Canada, one NATO partner who has carried out her military commitment to the letter,

were now to call her “token” forces home?

Another conundrum, equally difficult for politicians, is the question of nuclear weapons. Canada makes none of her own and doesn’t intend to. Prime Minister Diefenbaker has said repeatedly that Canada’s hope and desire is the complete abolition of nuclear weapons in all countries. But meanwhile NATO tactics and strategy are based upon nuclear weapons and any force that doesn’t have them will be an ill-armed force, unable either to defend itself or to do its share on the offensive.

The nuclear weapons themselves are in the custody of the United States and will remain so. Argument on this point will be wasted—American military authorities are bound by American law, which expressly forbids them to let nuclear warheads out of their hands except for immediate use in war. This is a major sacrifice of Canadian sovereignty, to depend on weapons that are not in Canadian hands, but the alternatives are either to make our own or to do without. Neither is very attractive.

Similar difficulties arise in the major issues on the civilian and domestic front —“tight money,” for instance.

Opposition parties had great fun mocking the government’s talk on this sore subject, the labored attempts to prove that no “tight money policy” exists, the attempts to find or fabricate differences between the money situation today and that of 1956-57. If the government is obliging enough to keep on talking the same way, it will solve a problem for the opposition.

But what if the argument shifts to the question, not of whether a tight money policy exists, but of whether it ought to exist?

No responsible spokesman for the Liberals has yet pronounced against it. Liberals have argued, rightly, that the government must accept a final responsibility for monetary policy as for all other national policy, just as the Conservatives rightly argued in 1956-57 when the Liberals were in power. But while Conservatives were flatly against tight money then, and proved it by expanding the money supply and adding two billion dollars to the national debt as soon as they got into office, Liberals have been more cautious. They have resisted the temptation to earn a cheap popularity by taking the side of the frustrated borrower and have merely told the borrower that his failure to get a loan is the government’s doing.

Bankers and others in the financial community are still afraid that the government may take direct steps to get rid of this load of blame—introduce some kind of legislation to give it more direct power over the Bank of Canada and the chartered banks. They have not forgotten Prime Minister Diefenbaker’s television speech about tight money and his obscure but ominous threats against anyone who might withhold the benefits of Canadian prosperity from the small borrower. They are awaiting the speech from the throne with more eagerness and apprehension than they’ve felt for years.

Most observers in Ottawa, though, believe this alarm is exaggerated. They doubt that the government really wants to have direct and unmistakable responsibility for interest rates, bond prices, and the small man’s ability to borrow money. If any such legislation is brought in, they think, it will be of the Bill of Rights variety—full of pious postures and worthy thoughts, but bringing no real change. ★ 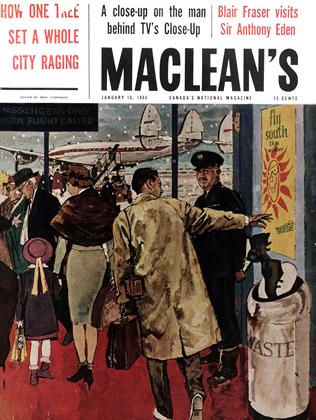