MAYBE you’d better not turn down the volume when the commercial comes on, after all. You could well be missing some of the best — and highest-priced — entertainment on radio and TV.

Heeding, at last, the rocks and ribbings thrown for years at singing commercials, more and more advertisers will be trying to make them more palatable by introducing some or all of these changes.

Hit tunes: A German immigrant recently surprised Toronto composer Maurice Rapkin by singing the rumba commercial for People's Credit Jewelers in German. He’d picked it up during the war, thought it was a Canadian folk song. Rapkin wrote that tunc 20 years ago and, with 65 daily playings across Canada, it may still be our most successful jingle. But, says Rapkin, who’s written more

than 1,000, all jingles will soon be aiming for hit status.

Your chances of writing a smash jingle are about as small as those of you writing a hit-parade leader. Rapkin’s probably the only man in Canada who earns a living writing words and music— mostly to specifications—for advertisers. He gets $300 a tune and only now has

finagled a “royalty.” Real money-makers are the performers. They get a minimum of $50 for a TV “spot” and $50 for every 13 weeks it's played.

Better arrangements: More singing commercials will be treated like Esso s Saturday night hockey theme. It’s been recorded by the Ray Charles Singers as a Dixieland jump, whistling march and a rumba. The tune’s so catchy that one army and five school bands have asked for copies.

Softer sell: Writers are now being asked to leave the name of the product till near the end.

Fewer words: “If you hear a child humming the melody, you're in.” says Dorothy Deane, a Toronto singer who’s done over 500 commercials. Records of the new Rothmans cigarette jingle—wordless jazz

on one side, wordless swing on the other —are being given away. "People will associate Rothmans with it and play it over and over,“ says the copy director of Rothmans’ agency.

Bigger names: Shell Oil's latest is a singalong-with-Mitch Miller. Stars have been used before, of course. Priscilla Wright, then a 14-year-old London, Ont., protege (now a second-year University of Toronto student) is the squeaky voice on “I’ll take Bromo for fast relief,” and the lilting serenader of Pink Liquid Vel. Her father wrote both tunes. CBC star Joyce Hahn, whose brother is a Montreal jingleentrepreneur, calls the 400 commercials she’s made in five years her bread and butter. “They’re getting better,” says Miss Hahn. “People don’t want that terrible stuff pushed down their throats any MORE.”--SHIRLEY MAIR 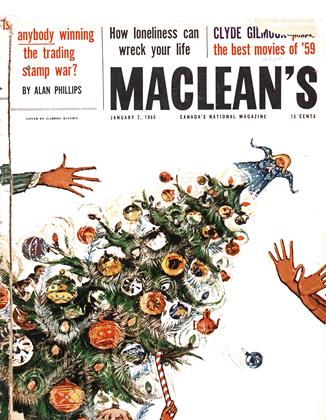