Must a good New Canadian be ready to kill his brother? January 30 1960

OUR NOMINEE for Canadian Citizen for 1960 is a young man who was refused Canadian citizenship in 1959. Giorgio Cappellozzo is a twenty-one-year-old Italian immigrant who was asked by a Canadian judge whether he would be willing to fight against his native country if Canada and Italy were at war. Cappellozzo had the honest simplicity to answer no he wouldn’t. His reason: “1 cannot fight against my brothers and sisters.”

It was, of course, an obviously improper question—pompous, sententious and silly. It posed the same kind of artificial dilemma as the old sophomoric debating point: "If your wife and your infant son were drowning and you could save only one of them, which one would you save?" Even as a parlor game the problem is distasteful. As a question to be answered under oath it is preposterous.

An older, more cynical man would have recognized this and given the pompous, sententious and meaningless affirmative that the questioner evidently expected. Young Cappellozzo was naïve enough to take the question seriously and honest enough to give a truthful answer.

But to our mind his answer was more than truthful and candid; it was also right—the only answer a good citizen in a free country could have given in the time and circumstances in which he was asked the question. It is neither profitable nor humane to ask any man to make a decision on so painful a matter unless the need for the decision should actually arise. Until the real event occurs or at least becomes plainly imminent, who can be expected to judge the forces that brought it about? Who can make an honest decision about its rights and wrongs? If there is any man willing to kill his father or his brother on behalf of a newly-adopted country then we have no desire to welcome this monster as a fellow Canadian.

What of the man who is capable of saying that in any or all circumstances he will put his country's alleged interests above any conceivable impulse of his private conscience? What is the difference between him and the patriotic Nazi school children who were praised for informing on their parents to the Gestapo? The Communist parents who turned in their own sons and the wives who betrayed their own husbands to the purge trials of Joseph Stalin in the 1930s? Why did we name a mountain after Edith Cavell if we did not share her belief that "patriotism is not enough”?

To Giorgio Cappellozzo, a good brother and an honest man, we wish a happy new year in Canada. 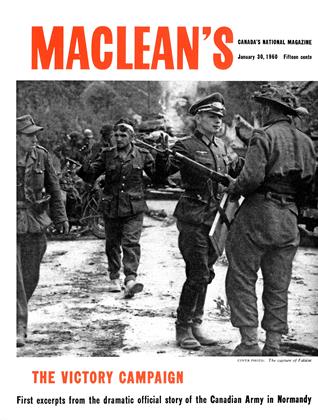