Among the hundreds of Canadians who now claim the title of professional actor, only a handful make a living by acting. One of that handful is Lou Jacobi, the character actor. After a quarter of a century of training (and of living his roles), Jacobi has become in fact the epitome of

THERE IS PROBABLY nothing an actor likes better than work. His is a crazy, often insecure profession, and about the best insurance an actor can have is a variety of talents.

Lou Jacobi, a forty-seven-year-old Canadian performer, as he calls himself, knows this well. He loves the theatre, and while he prefers straight acting roles (like the one he now has on Broadway in the Tyrone Guthrie production of Paddy Chayefsky’s hit play, The Tenth Man) his training was in a harder school, and if necessary he can always go back to it.

“If things go sour for me on Broadway,” he says, “I can always find work — in the Catskills, in Muskoka, in England, somewhere.” Lou’s Canadian apprenticeship, which lasted until he left Canada for England when he was thirty-nine, included jobs as a singing waiter, a summer-resort social director, a teacher of dramatics, a performer in Toronto’s annual revue Spring Thaw, and an interminable series of dates as a minstrel-raconteur at Jewish banquets, stags, bar mitzvahs and weddings. He can tell jokes, recite, mime, sing, act — even play the violin, if pressed.

“You’re pretty good, Lou,” a friend said to him during one of his stints as a resort social director. “What do you do in the wintertime?” “I wear an overcoat,” Lou said.

“You had to be versatile,” he says, recalling his days on the borscht circuit, “and you had to put salt and pepper on everything. But if you didn’t identify with your audience right away you were dead; they wouldn’t spend two seconds on you. You had to get to them fast and hold them like steel. That’s where the psychology came in; you had to have an understanding of humanity. And you had to like people. I’ve always liked people.”

People have returned the compliment. In terms of an acting career it’s more important that some people like you than others, of course — people like producers and directors for example. One man who liked Lou Jacobi was the New York writer-director Garson Kanin (who was responsible for Born Yesterday). About five years'ago Kanin met Lou in a London dressing room after

a performance of Guys and Dolls, in which Lou had a small part. Lou had gone to England to make his fortune, and Kanin, as it turned out, was it.

“Lou started talking and I knew right away that there was something remarkably original about the guy,” Kanin says. “I now know why. He’s so sure and so exact, and he has an instinctive shrewdness about all facets of human relationships — to say nothing of his humor.” Kanin later cast Lou in a play he was producing in London, called Into Thin Air, which took a cue from its title and evaporated after three performances in the West End. But by this time Kanin had accepted an offer to direct The Diary of Anne Frank in New York, and he offered Lou the important supporting role of van Daan, one of the occupants of the Amsterdam attic in which Anne Frank and her family hid from the Germans.

Kanin’s estimate of the Jacobi talent and of Lou’s approach to his work was more than justified, for Lou applied to this part his basic philosophy as an actor. He is convinced that life teaches more than drama schools. Van Daan was a simple man, frustrated by being confined in an attic for so long, “unable to understand or reconcile the circumstances that have put him in that position,” Lou says. “I remember how my Uncle Max paced the kitchen when he was out of work during the Depression. 1 dicj the same thing for van Daan with an angry, caged-lion sort of walk. And it worked.”

It worked so well that Lou got good notices, and after a long run with the play on Broadway and the road he was chosen to play the same part in the movie version. This part was the break that marked the beginning of his growing reputation as a leading character actor. Today he has all the work he can handle.

During the New York run of Anne Frank Lou met and married Ruth Ludwin, a New Jersey girl. The Jacobis live in a small furnished apartment on the twenty-second floor of a building overlooking Central Park that gives them a magnificent view of Upper Broadway, Fifth Avenue, the Hudson, and the New Jersey shoreline. Lou leads a quiet life, whose pattern is currently set by his nightly assignment in the role of Schüssel, a loudly self-proclaimed atheist in Chayefsky’s The Tenth Man, a play about the

1 My neighbors were upset about their son's poor academic record. “What a disgrace!” exclaimed the father. “Twenty out of a hundred in arithmetic.” “Why not send him to Hebrew school?” suggested the mother. “He might do better there.” So the boy went to Hebrew school.

2 A week later his father asked him what he had learned. “Well, Dad, I’ve learned the kaddish, the memorial prayer for the dead.” “The kaddish! I spend a fortune and they teach you the kaddish. Let me get that principal on the phone.”

3 “Mr. Principal. This is Joe Bromstcin. I send my boy to you because he’s a little backwarl and we’re embarrassed about it. Next thing I know you’re teaching him the kaddish. His mother and I aren’t dying, God forbid. Anyway it’s a very difficult prayer to learn.”

4 “Don’t worry, Mr. Bromstein.” says the principal, “you should live so long till he learns it.”

efforts of a group of elderly orthodox Jews to exorcise the dybbuk, or evil spirit, that they believe possesses the granddaughter of one of them. When the play is over he often drops into The Russian Tea Room on 57th Street, a hangout for music and theatre people next door to Carnegie Hall where Lou can indulge his weakness for borscht, beef strogonoff and talk. His days are spent sleeping (until noon, with catnaps before and after dinner), reading, feeding the squirrels in Central Par.k, and even (when a mad mood comes) sawing a little on the violin his father, Joseph Jacobovitch, encouraged him to play as a boy in Toronto.

Lou’s family ties are very close, and he makes sure his father and mothfer are on hand whenever significant events take place in his life. He flew them from Toronto to New York for the openings of The Diary of Anne Frank and The Tenth Man, and they were on the set in Hollywood for the first day's shooting of Anne Frank. They arc his most loyal fans. When he got his first bit part in a modest English movie called Always a Bride, Mr. and Mrs. Jacobovitch traveled halfway across Toronto to see it when it played there. They sat patiently waiting for Lou’s brief appearance, and when it came his father didn’t wake up in time to catch it. “But they were loyal,” Lou says. “They sat through the whole damn thing again.” One of the happy results of his success was that last spring he was able to send his parents to Israel for two weeks, realizing one of their life’s dreams.

Lou's approach to his work is refreshingly relaxed. “Any actor has got to have desire,” he points out, “but he can get along without that tyrannical drive that's so nauseating and obscene. I give a good-sized chunk of myself to my work, but I won’t make it my whole life. I don’t want to be that lopsided.”

He also knows — it is the legacy of that harsh training on the borscht circuit — that in the end the public is boss. “To hear some actors talk,” he says, “you'd think the theatre works on debit and credit. ‘Look what I'm giving,’ they say. ‘what's the public doing in return?’ They forget that nobody asked them to be actors. They can get out whenever they want.” And he adds, with the wry smile of an actor in work who knows — more or less — where his next job is coming from, “It’s an overcrowded field anyway.” ★ 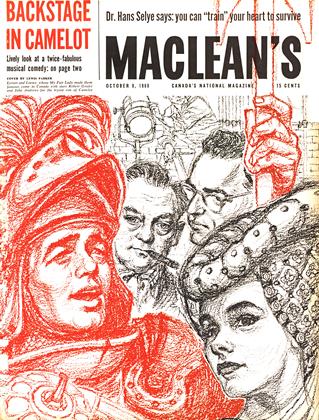